NEW HAVEN, Conn. — Architect César Pelli, renowned for designing some of the world’s tallest buildings, has died, his firm said. He was 92.

Pelli, an Argentine-American whose work ranged from skyscrapers in Malaysia and New York to an arena in Tulsa, Oklahoma, died Friday at his home in New Haven, Connecticut, said Anibal Bellomio, a senior associate architect at Pelli Clarke Pelli Architects.

Pelli’s cause of death wasn’t specified.

After growing up in Depression-era Argentina, Pelli rose to the literal heights of the architectural world. At 1,483 feet (452 meters) tall, his Petronas Towers in Kuala Lumpur, Malaysia, are among the tallest buildings on the planet.

News of his death prompted tributes from people including Argentine President Mauricio Macri, who tweeted that “the works he leaves throughout the world as a legacy are a pride for Argentines.” 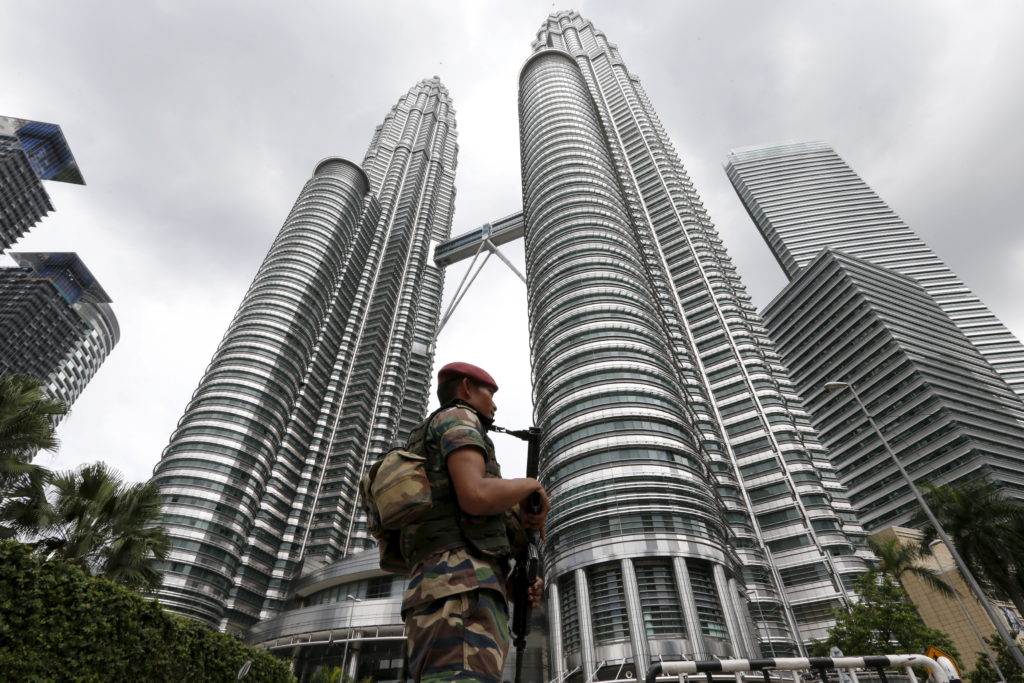 A Malaysian soldier patrols in front of the Petronas towers at the venue of the 27th ASEAN summit in Kuala Lumpur, Malaysia, November 21, 2015. Photo By Jorge Silva/Reuters

Pelli, a former dean of the Yale School of Architecture, saw his field as “an eminently social art,” as he told a magazine interviewer in 2012.

“It has a deep responsibility in everything that has to do with human beings, their history, their geography and their feelings,” he told Americas, a magazine then published by the Organization of American States.

Besides the Petronas Towers, Pelli’s buildings include Salesforce Tower in San Francisco, Los Angeles’ colorful Pacific Design Center and Brookfield Place, a downtown Manhattan skyscraper complex that includes the headquarters of The Associated Press. The complex, formerly called the World Financial Center, is across the street from the World Trade Center.

Other Pelli projects are as varied as the three-tower Shanghai International Finance Centre, the Aria Resort & Casino in Las Vegas, a chapel at Xavier University in New Orleans, and the BOK Center arena in Tulsa.

Pelli was born into a humble background in the northern Argentine city of San Miguel de Tucuman; he once told an interviewer that his grandfather’s inheritance was nine loaves of bread in an oven. His mother was a geography and French teacher, and his father a civil servant who ended up selling inks and glue to get by during the Great Depression.

As a university student, he got into architecture after realizing it involved “all things that I like, drawing, history, design, art,” he told The Talks, an online magazine, in 2017. A graduate-student scholarship to the University of Illinois brought him to the United States in 1952.

During his career Pelli became known for soaring skyscrapers and his use of glass, among other things.

“One aspires for the sky, and I understand that. It is so powerful,” he told The Talks.

Still, Pelli told the online magazine he preferred living only about five or six stories up himself, “so that I can see the people, the trees, and the world on the street. Beyond that, I lose contact with the ground!”

In a 2007 interview with La Gaceta, a newspaper in his Argentine home state of Tucuman, Pelli was asked what he would like his epitaph to read.

“‘He was a good person,'” the architect responded.

Left: Argentinian architect Cesar Pelli delivers a speech during the Grand Opening of the CityCenter, a mixed-use urban development center on the Las Vegas Strip on December 16, 2009. Photo by Gabriel Bouys /AFP/Getty Images