The last time Mai Chue Xiong heard from her husband was more than four years ago, when he called her from jail after he was deported from the family’s hideout in Bangkok.

Thailand had made a controversial decision in 2009 to stop hosting thousands of Hmongs fleeing persecution in Laos, and her husband, Kha Yang, found himself caught in the cross hairs.

Hmongs have faced retaliation for decades following their recruitment by U.S. militia operations during the ’60s and ’70s. Although Yang had refugee status, he was still forced back to Laos by the Thai government. He was arrested by Lao police when he arrived because they saw him as a traitor and a leader to more people like him, according to his wife.

Calling her from jail, Yang said he was sure police would kill him.

Today, it is unclear if Yang is still alive.

His wife spent four years hiding in Bangkok, living in fear that Thai officials might send her back. In January, the United Nations High Commissioner for Refugees followed through with its promise — she and her six children would be flown to Madison, Wisconsin, to live with Yang’s sister in-law, who emigrated in 1980. 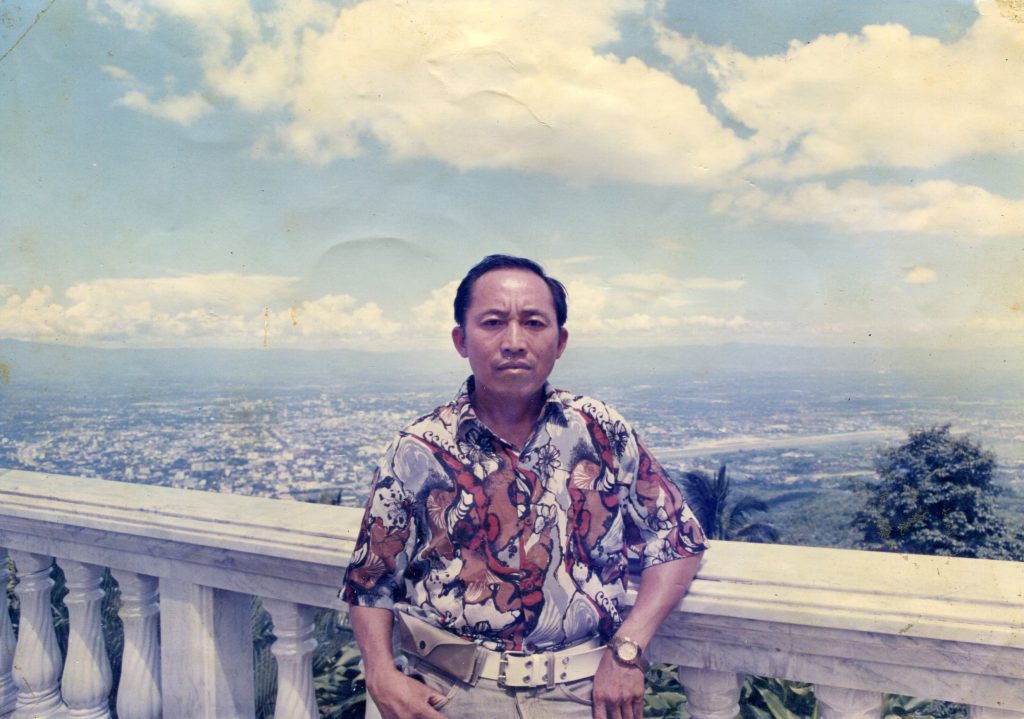 Kha Yang is seen here in a photo taken by a friend in 2004 in Thailand, just after the Yang family fled Laos for the first time. Photo courtesy of Mrs. Kha Yang

This fall, President Barack Obama is expected to become the first U.S. president to visit Laos, where the U.S. enlisted Hmong people during the Vietnam War to fight with Americans against people from their own region.

Obama is planning to attend the Association of Southeast Asian Nations Summit in Vientiane, according to his office, because the U.S. is a partner to the association built to aid economic and cultural development. This year’s chair is Laos.

But the Human Rights Watch, a nonprofit and international human rights advocacy group, hopes to use the trip to shine a light on the consequences still being felt from what has been called the CIA’s “Secret War” against communism in the 1970s and Laos’ lesser-known involvement during the Vietnam War era.

During the Secret War, the CIA enlisted tens of thousands of people from the Hmong tribe, who lived in mountainous regions and whose ancestors are likely from China, living in Laos to fight for the U.S. As guerrilla soldiers on the ground, the U.S. trained 60,000 Hmongs, often to fight along North Vietnam’s supply route through Laos.

After the Vietnam War ended and thousands of Hmongs had been killed, the ones who survived were largely seen as traitors in their own country, according to a Congressional report on Laos-U.S. relations.

Following a period of arrests, kidnappings, rape and torture of the Hmong people, hundreds of thousands began to flee to Thailand, hoping to eventually gain asylum somewhere else, like Mrs. Yang and her children ultimately did.

“There have been decades of abuses” against Hmong people in Southeast Asia, said Phil Robertson, deputy Asia director for Human Rights Watch.

The U.S. has resettled more than 253,000 persecuted Hmong refugees since the war ended, many of whom came through Thailand like the Yangs. But even though the U.S. Department of State has raised concerns with the Lao government about his case, it has not been able to find Yang.

Talking to his wife about anything that happened before this year triggers streams of tears. She said the Yangs crossed the Mekong River to Thailand the first time in 2004, traveling overnight in a small boat, because a family member had been killed by Lao officials.

When they migrated to Bangkok from the coast, Thai officials took them to the Nong Khai immigration center, about 380 miles northeast. They were crammed into small rooms, often separated from each other without sufficient food or water and unable to go outside, sometimes for weeks at a time, she said.

Then in 2009, Thailand decided to stop hosting the Hmong population living within the country. Refugee camps were destroyed and more than 4,000 Hmong people were deported.

This included the Yang family, who were among 158 documented refugees living in the Nong Khai immigration center with paperwork from the United Nations.

These 158 were awaiting resettlement in one of four countries that had already agreed to house them, including the U.S., Canada the Netherlands and Australia. The U.S. Department of State and Human Rights Watch condemned all the deportations, but deporting the Nong Khai group was seen as especially egregious because they were documented refugees who had a clear path to asylum.

The Yang family was jailed for a week, then sent to a restricted village secured by police. In April 2011, they fled to Bangkok for a second time.

Yang had picked up a construction job to help pay for the medical bills of their youngest child who at the time was four months old, running a fever and developing blisters. When he left for work, he was detained by Thai authorities.

“I was sure that he would die. And I had so many children to take care of and I was thinking about suicide,” she said.

Since then, all of the 158 have been released and accounted for, except Yang.

His deportation was detailed by the U.S. State Department in its report on Thailand’s human rights practices because Yang is believed to be the last documented Hmong refugee from the Nong Khai group that is still missing.

While there may still be thousands who are hiding in fear of persecution with no clear path to asylum, Yang holds the status of a refugee and has rights to protection under an international human rights treaty that Laos ratified.

The State Department’s 2015 report released in April said Yang’s whereabouts still “remain unknown,” adding that the Laos government had ignored requests from the United Nations High Commissioner for Refugees to speak with him.

“We have raised our concerns privately with the Lao government,” State Department spokeswoman Katina Adams told the PBS NewsHour in an email. “We encourage Laos to fulfill its international human rights commitments under the UN Covenant on Civil and Political Rights.”

Torture and state-sanctioned kidnappings are not the only lethal legacies of the CIA’s Secret War operation that could confront Obama as he plans his visit.

The U.S. dropped more than two million tons of bombs while trying to destroy North Vietnamese supply routes during the ’60s and ’70s. As many as a third of them did not detonate, leaving Laos contaminated with bombs that still explode and hit more than 100 people every year.

The U.S. has contributed to the clean-up and recently increased annual spending on it. But more than 40 years after the war, most of the munitions remain

Joshua Kurlantzick, who researches Southeast Asia for the Council on Foreign Relations think tank, said he thinks that Obama may call for a greater effort to remove the munitions rather than focus on a single human rights case.

And even if Yang is still alive and could be freed, challenges remain for members of the Hmong community living in the U.S.

Hmong Americans face significant social and economic barriers, and are “one of the poorest Asian American communities,” according to Kurlantzick, who is writing a book about the Secret War in Laos.

Bao Vang, the president of Hmong American Partnership, the largest nonprofit dedicated to empowering the Hmong American community, said some strides have been made for the community, but that hurdles remain, as they do with other ethnic groups. After 40 years in the U.S., Vang points to the fact that 14 percent of Hmong Americans have obtained a college degree. “That is to be celebrated,” she said. “But it shows we still have deep disparities.”

Vang said the nonprofit does not do international work, but that it supports Human Rights Watch bringing attention to Yang’s circumstances.

Phil Robertson of Human Rights Watch hopes that pressure from his group and politicians will provoke Obama to put the resolution of his case on a list of humanitarian requests to Lao leaders.

“He was someone who was found to be a refugee by [the UN] and forced back by the Thai government not once but twice,” in violation of international refugee law, Robertson said. “We will be pushing very hard to get him released and allowed to depart the country and join his family in the U.S.”

Left: Kha Yang and her six children, all Hmong refugees, two days after they moved to the U.S. in January, 2016. Photo by Ying Lee