MANILA, Philippines (AP) — Victims of a huge mudslide set off by a storm in a coastal Philippine village that had once been devastated by a killer tsunami mistakenly thought a tidal wave was coming and ran to higher ground where they were buried alive by the boulder-laden deluge, an official said Sunday.

At least 20 bodies, including those of children, have been dug out by rescuers in the vast muddy mound that now covers much of Kusiong village in southern Maguindanao province, among the hardest-hit by Tropical Storm Nalgae, which blew out of the northwestern Philippines early Sunday.

Officials fear 80 to 100 more people, including entire families, may have been buried by the deluge or washed away by flash floods in Kusiong between Thursday night and early Friday, according to Naguib Sinarimbo, the interior minister for a Muslim autonomous region run by former separatist guerrillas.

Nalgae, which had vast rain clouds, left at least 73 people dead in eight provinces and one city in the Philippine archipelago, including in Kusiong, and a trail of destruction and flooding in one of the world’s most disaster-prone countries.

READ MORE: As ‘flash floods are getting flashier,’ communities worry about aging infrastructure

The catastrophe in Kusiong, populated mostly by the Teduray ethnic minority group, was particularly tragic because its more than 2,000 villagers have carried out disaster-preparedness drills every year for decades to brace for a tsunami because of a deadly history. But they were not as prepared for the dangers that could come from Mount Minandar, where their village lies at the foothills, Sinarimbo said.

“When the people heard the warning bells, they ran up and gathered in a church on a high ground,” Sinarimbo told The Associated Press, citing accounts by Kusiong villagers.

“The problem was, it was not a tsunami that inundated them but a big volume of water and mud that came down from the mountain,” he said.

In August 1976, an 8.1-magnitude earthquake and a tsunami in the Moro Gulf that struck around midnight left thousands of people dead and devastated coastal provinces in one of the deadliest natural disasters in Philippine history.

Lying between the Moro Gulf and 446-meter (1,464-foot) Mount Minandar, Kusiong was among the hardest hit by the 1976 catastrophe. The village never forgot the tragedy. Elderly villagers who survived the tsunami and powerful earthquake passed on the nightmarish story to their children, warning them to be prepared.

WATCH: How do you protect against a tsunami?

“Every year, they hold drills to brace for a tsunami. Somebody was assigned to bang the alarm bells and they designated high grounds where people should run to,” Sinarimbo said. “Villagers were even taught the sound of an approaching big wave based on the recollection of the tsunami survivors.”

“But there wasn’t as much focus on the geo-hazards on the mountainside,” he said.

Bulldozers, backhoes and payloaders were brought to Kusiong on Saturday with more than 100 rescuers from the army, police and volunteers from other provinces, but they were unable to dig at a spot where survivors said the church lay underneath because the muddy mound was still dangerously soft, officials said.

The national disaster-response agency reported 22 missing from the storm’s onslaught in several provinces. Sinarimbo said many of the missing in Kusiong were not included in the government’s official tally because entire families may have been buried and no member was left to provide names and details to authorities.

Army Lt. Col. Dennis Almorato, who went to the mudslide-hit community Saturday, said the muddy deluge buried about 60 rural houses in about 5 hectares (12 acres) of the community. He gave no estimate of how many villagers may have been buried but described the extent of the mudslide as “overwhelming” and said the nighttime disaster may have unfolded fast. 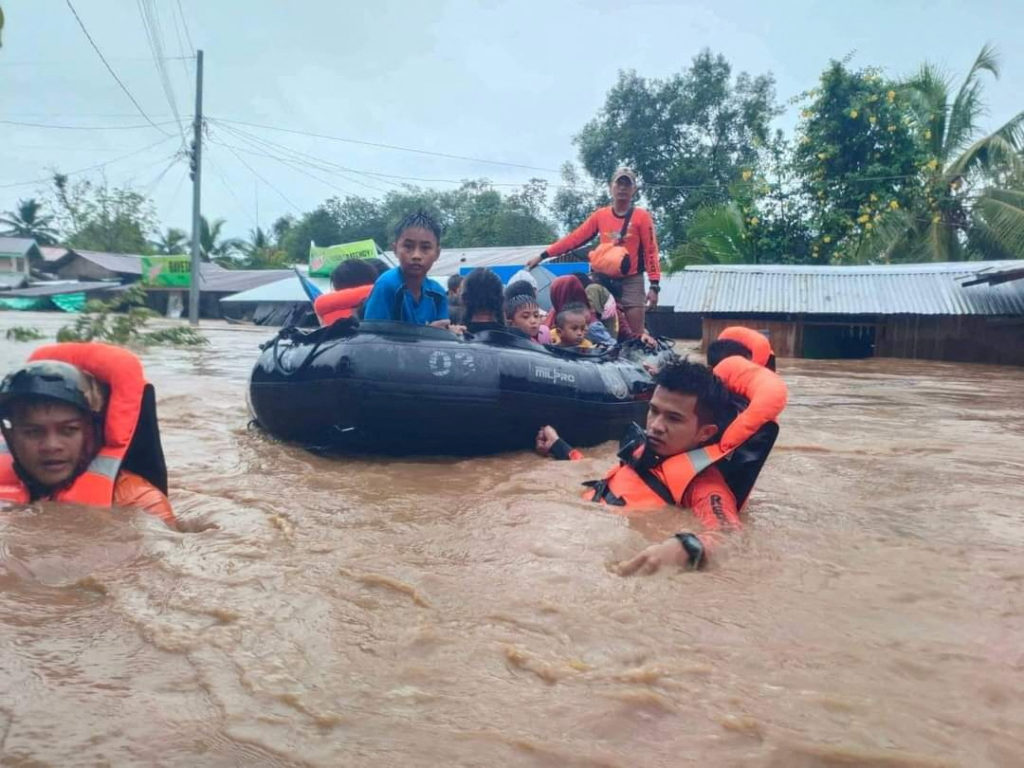 The stormy weather in a large swath of the country prompted the coast guard to prohibit sea travel in dangerously rough seas as millions of Filipinos planned to travel over a long weekend for visits to relatives’ tombs and for family reunions on All Saints’ Day in the largely Roman Catholic nation.

More than 100 domestic and international flights were canceled, Manila’s international airport was briefly closed amid stormy weather and sea voyages in storm-whipped seas were prohibited by the coast guard, stranding thousands of passengers.

Floodwaters swamped many provinces and cities, trapping some people on their roofs, and more than 700 houses were damaged. More than 168,000 people fled to evacuation camps. President Ferdinand Marcos Jr. expressed disappointment over the high casualty toll in a televised meeting with disaster-mitigation officials Saturday.

“We should have done better,” Marcos Jr. said. “We were not able to anticipate that the volume of water will be that much so we were not able to warn the people and then to evacuate them out of the way of the incoming flash floods.”

About 20 typhoons and storms batter the Philippine archipelago each year. It is located on the Pacific “Ring of Fire,” a region along most of the Pacific Ocean rim where many volcanic eruptions and earthquakes occur, making the nation one of the world’s most disaster-prone.