As ‘flash floods are getting flashier,’ communities worry about aging infrastructure

ST. LOUIS– Flooding kills more people in the United States than tornadoes, lightning or hurricanes. And as communities deal with growing frequency and intensity of these events, and the damage that comes along with them, experts warn that just as much attention needs to be paid to aging infrastructure, which can make an already-bad natural disaster worse.

“In many cities, the pipes in the ground are 100 years old, 70 years old, and those pipes need to be bigger because what we’re seeing is rain that would have come over three or four days is now coming over a really condensed amount of time,”said Melissa Roberts, executive director of the American Flood Coalition.

When heavy rain hit the St. Louis area at the end of July, the region got 25 percent of the rain it usually gets in a year in just 12 hours, the National Weather Service said– the most the area has seen since 1915. One fatality was reported in the St. Louis area as a result of this flooding, and more than 35 deaths have been counted so far in subsequent flooding in Kentucky.

“This is what it means when the scientists say ‘flash floods are getting flashier.’ We just don’t have the ability to drain that water, so that’s why we’re seeing roads become rivers,” Roberts said.

St. Louis is home to the country’s fourth largest sewer system and also one of the oldest, with more than 9,600 sewer lines, according to the Metropolitan St. Louis Sewer District. The wastewater sewer system was not built until the 1850s, with more added around 1894.

“We know sewer development started after the Civil War but a lot of that sort of expansion was done piecemeal by property owners and developers,” said Michael Allen, a senior lecturer in architecture at Washington University in St. Louis. “So there’s older sewer sections, even back to the 1840s wood boxes.”

Many portions of the century-and-a-half-old system are still in use today. But as Allen points out, as the world changes, populations move, development increases and climate change alters our planet, infrastructures must transform as well. “There’s a huge need to adjust it over time,” he said.

Last year, the American Society of Civil Engineers gave the United States as a whole a C- grade for its infrastructure, noting that every two minutes a water main breaks across the country. What we know about stormwater capacity, the society says, is that it is “relatively data-poor with no comprehensive national database of assets.”

After President Joe Biden signed an unprecedented $1 trillion bipartisan infrastructure bill into law last year, St. Louis Mayor Tishaura Jones announced the state was “slated to get $9 billion of those funds to help repair our roads and bridges, fix our water systems, expand broadband internet access, and improve our public transit.” In May of this year, Jones also signed a piece of infrastructure legislation putting $86 million towards several projects. The bill includes more than $21 million for street repairs, $2.8 million for bridges, another $6.5 million for parks and recreation, and another $16 million to the fire department among other things.

As for the city’s sewer system, Sean Hadley of the Metropolitan St. Louis Sewer District says the department is making improvements to its wastewater sewers but the organization doesn’t have the funds to make necessary infrastructure improvements to the stormwater system.

A 2019 proposition would have given $30 million a year to “address issues like localized flooding and erosion,” Hadley said in an email, but residents at the time voted against it. “We are in the process of putting another rate proposal together that we will bring to the voters in 2024,” he added.

When asked about immediate plans for the city’s infrastructure given the recent flooding, a spokesperson for the city said the city is still looking at how and where infrastructure performed and would not have a definitive analysis until a much later date. 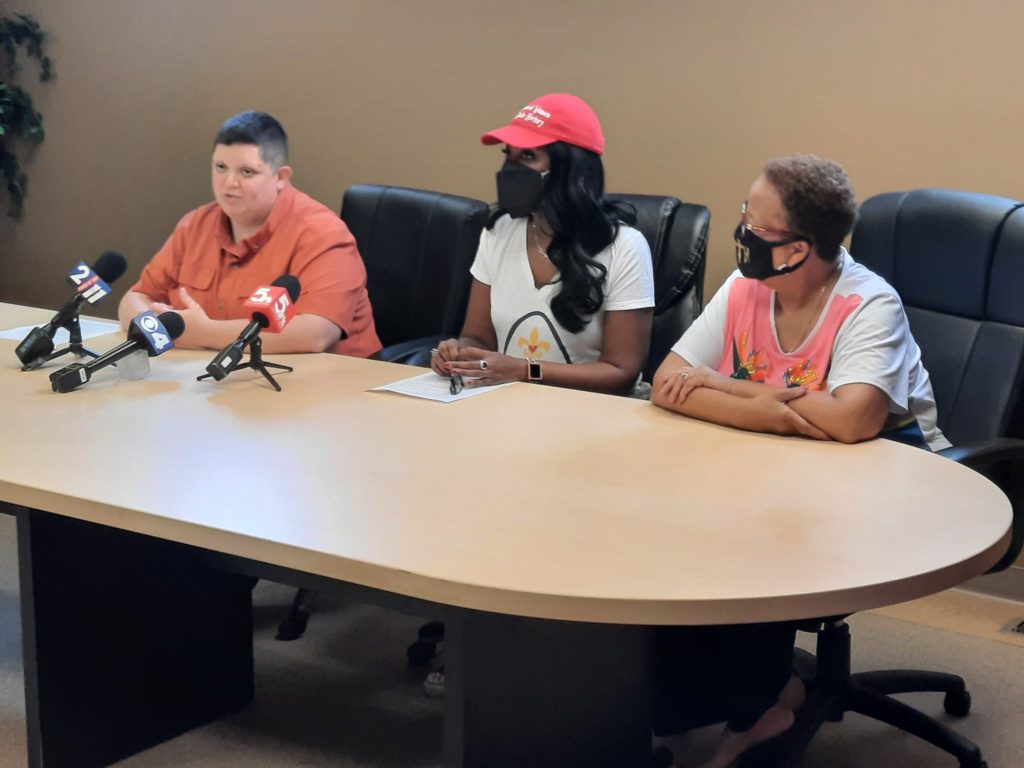 St. Louis Mayor Tishaura Jones joined other community leaders to assess some of the hardest hit neighborhoods. Photo by City of St. Louis

A day after the flood, Jones and other city officials visited some of the hardest hit areas and subsequently declared a state of emergency. The city also deployed mobile command centers to help those in need. This week,the Biden Administration granted Missouri Gov. Mike Parson’s request for a federal disaster declaration, which means eligible residents can access FEMA’s Individual Assistance program.

It’s an issue, however, that Allen said cannot be fixed by one city or agency alone.

“It’s a regional issue. Water doesn’t just stop at any county or city line, so it’s not fair to ask the city or St. Charles County to do this alone because we’re all contributing to the water that flows across our borders,” Allen told the NewsHour.

And, as Roberts noted, aging infrastructures is not just a St Louis or East St. Louis problem. It doesn’t just affect Missouri nor does it only affect Illinois.

READ MORE: Kentucky Gov. Beshear says FEMA has to ‘get it right’ in response to flooding

“We need a transformational change in the way we deal with flooding and adaptation in this country,” Roberts told the NewsHour. “These aren’t singular failures, these are part of a system that hasn’t adapted to what we’re seeing now and hasn’t adequately prepared communities.”

In the 30 years Yvette Lyles has lived in Cahokia Heights, she and her family have witnessed parts of the community flood more than 15 times, she says.

Late last month, when flooding struck the St. Louis metropolitan area, it struck communities like hers inI East St. Louis, on thean Illinois side of the Missouri River, too.

“We kept getting up throughout the night every hour on the hour looking out but see water was rising,” she said. 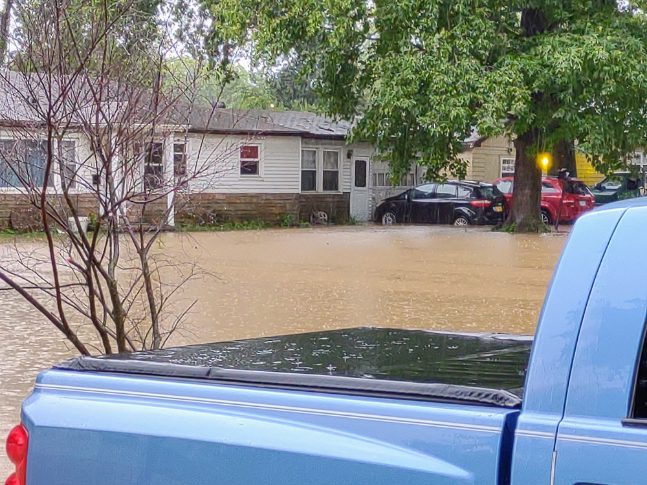 Across the Mississippi River from St. Louis families in Cahokia Heights grappled with flooding too, an experience some say happens all too often. Photo by Yvette Lyles

She and her neighbors stayed awake as long as they could.

“We get up, look out, we call each other. ‘Are you looking up? Do you want to take the next watch, and then I’ll call you about anything?’,” she said.

At about 4 a.m. she says her family went to sleep, only to wake again at 5:30. The water was rising more than usual.

The family began putting sandbags around the perimeter of their home. It was not until nearly 7 a.m. when Lyles noticed the water creeping up the driveway, then to her porch and eventually inside the house. 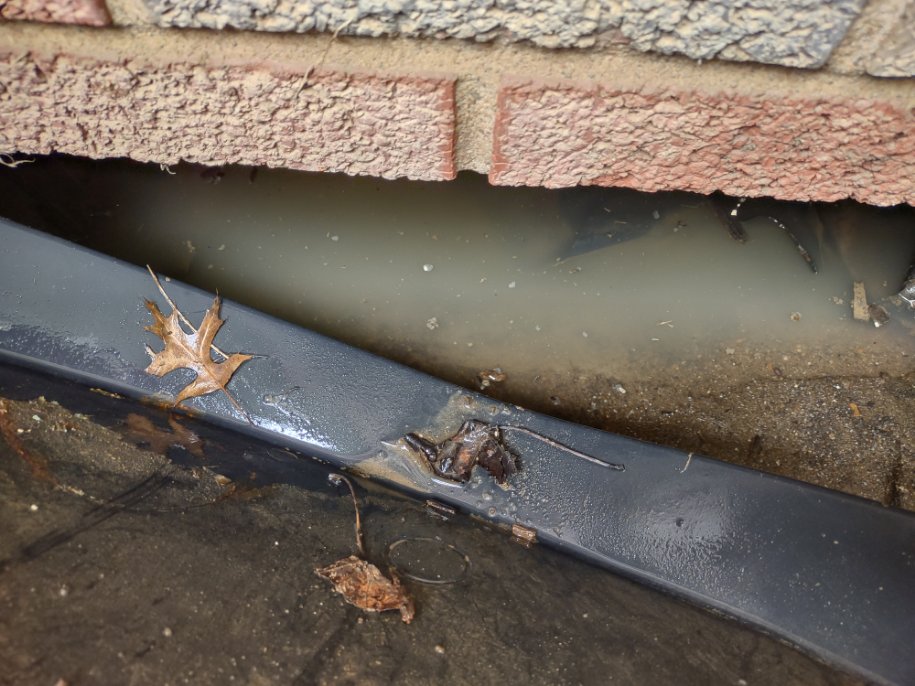 Lyles said after a while the water started to get closer and closer to her home. Before she knew it, it started to make its way in. Photo by Yvette Lyles

Getting emotional while recounting her story, Lyles said her son asked if she was ready to let the house go if the water got too high –, something she said she wasn’t prepared to do.

“I said, ‘son this is our home, this is what I thought to raise you guys up,’” she said.

After three decades in her house and countless bouts with disastrous weather this was the first time Lyles said she cried.

Residents and lawmakers have pushed for more attention to neighborhoods like Lyles’.

“Cahokia Heights is made up of more than 70 percent Black residents, more than 30 percent of whom are low-income. The city has long borne the burden of systemic racism and institutional neglect, including water infrastructure that has gone decades without adequate maintenance or replacement,” U.S. Senate Majority Whip Dick Durbin (D-IL), a member of the Senate Environmental Justice Caucus, wrote in a June 2020 letter to the U.S. Army Corps of Engineers urging them to act.

Just last year, the EPA ordered Cahokia Heights to “take immediate actions to prevent drinking-water contamination and to protect the health of residents.” Later the East St. Louis mayor would pledge to use $3 million dollars of COVID relief funds on the area’s sewer and drainage issues. For residents like Lyles, those promises aren’t being fulfilled quick enough.

“Patching the street ain’t Infrastructure, infrastructure is tearing this mess up and changing the stuff,” she said. “We don’t need any more assessments —, fix the problem so we can have immediate relief.”

“We have a right to clean water, we have a right to not have raw sewage spilling over into stormwater drain every time there’s a heavy rain or even a heavy rain,” she added. “We deserve better than that [and], we deserve to live like everybody else does, living in different communities –, especially the newer ones.”

On both sides of the river residents have been forced from their homes. Kyler Smith of Hazelwood, Missouri, was rescued by boat from her North St. Louis County apartment on the Missouri side of the border in the early hours of July’s flood. A few days later, Smith said she’d return to her home to find a notice with four words in big red letters: “Unfit for human occupancy.”

It is stories like Smith’s and Lyles’ that Roberts says emphasize the need to start looking at what is needed to lessen the impact of the next flash flood.

“We need accurate predictions of rainfall then we need to invest in good pipes in the ground, we need good investments in the ability to absorb more rainwater,” she said. “That could be stormwater parks, it could be permeable pavement, it could be retention ponds but we need to be able to understand current conditions and then plan for them and invest.”

All of that matters, Roberts told the NewsHour, especially when we are talking about saving lives.

“Whole neighborhoods sometimes never recover from that loss of life, so the stakes are really high, but it’s hard because it’s playing out in so many small decisions,” Roberts said.

Left: Cars are partially submerged on a flooded street during heavy rainfall in Hazelwood, Missouri, U.S., July 26, 2022 in this screen grab obtained from a social media video. Twitter @JensInTheClouds/via REUTERS