DERA ISMAIL KHAN, Pakistan — A female suicide bomber struck outside a hospital in Pakistan on Sunday as the wounded were being brought in from an earlier shooting against police, in a complex assault claimed by the Pakistani Taliban that killed a total of nine people and wounded another 30.

Salim Riaz Khan, a senior police officer in Dera Ismail Khan, said gunmen on motorcycles opened fire on police in a residential area, killing two. He says the bomber then struck at the entrance to the hospital, killing another four police and three civilians who were visiting their relatives. He said eight police were among the wounded, and that many of the wounded were in critical condition. 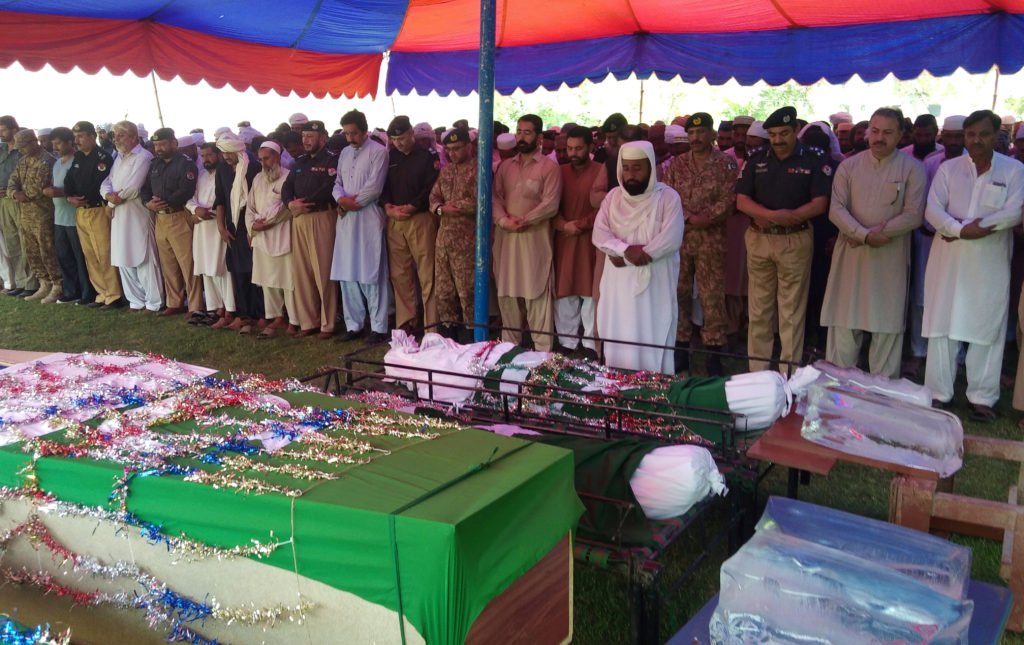 Police officers, soldiers and relatives attend the funeral prayer for the victims who were killed in a suicide blast at the premises of Civil Hospital in Dera Ismail Khan, Pakistan July 21, 2019. Photo by Kashif Naveed/Reuters

The blast damaged the emergency room and forced it to shut down, according to a hospital official, who said the wounded were taken to a military hospital. The official spoke on condition of anonymity for fear of reprisal.

The Pakistani Taliban claimed the attack but did not acknowledge that the bomber was a woman. The group has launched scores of attacks going back nearly two decades, but almost all of them were carried out by men.

Pakistan’s military has carried out several major operations in recent years against the Pakistani Taliban and other militants in areas along the porous border with Afghanistan. The violence has declined, but the militants still make their presence known through occasional attacks, mainly targeting security forces and religious minorities.

Later on Sunday, police said they had arrested 16 suspects in the attack, all of whom belong to banned organizations. Police officer Habib Ahmed said authorities also seized weapons during the manhunt.

Left: A police officer in plainclothes collects the evidence from the site of a suicide blast at the premises of the Civil Hospital in Dera Ismail Khan, Pakistan July 21, 2019. Photo by Stringer/Reuters