More than 100 people were killed and hundreds more injured in Kerala, India on Sunday morning from a blaze that swept through a Hindu temple during an unauthorized fireworks show for a local new year festival.

Around 3:30 a.m., while thousands of people were celebrating at Puttingal Devi temple in Paravoor, stray sparks landed on an overstuffed fireworks storehouse which exploded, according to the Associated Press.

Large plumes of smoke rose into the sky in the heavily wooded area, where lush green palm trees and other foliage surrounded the temple. Then a fire spread, trapping hundreds of people inside the temple as it crumbled.

“It was complete chaos,” Krishna Das, who attended the event, told the AP. “People were screaming in the dark. Ambulance sirens went off, and in the darkness no one knew how to find their way out of the complex.”

By 7 a.m., the fire was out but rescuers had to use backhoes to clear through the debris and find people. At least 102 people died in the fire and explosions and 380 were injured. 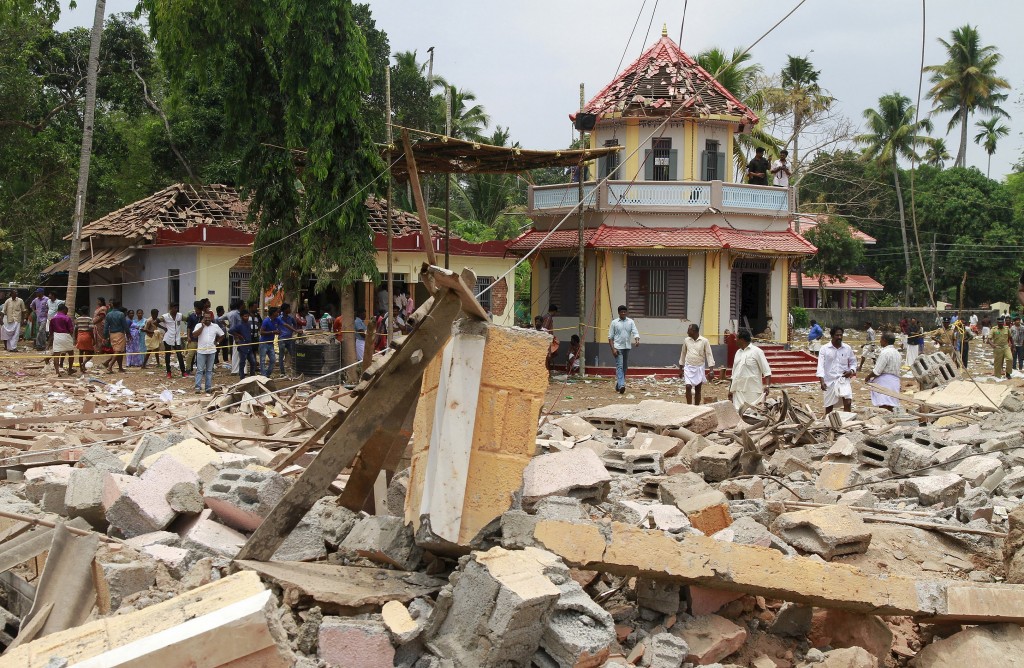 People stand next to debris after a broke out at a temple in Kollam in the southern state of Kerala, India, April 10, 2016. Photo by Sivaram/Reuters

The temple holds a massive fireworks display every year for the end of the seven-day festival, but this year it was denied a permit for the show for fear that the fireworks would get out of hand, according to the AP.

“We will be investigating how the orders were flouted and who was responsible for the decision to go ahead with the firework display,” said Chief Minister Oommen Chandy, the top elected official in Kerala state.

Prime Minister Narendra Modi flew to the site to visit people who were injured. Modi announced he would provide monetary compensation for next of kin. He tweeted that the, “Fire at temple in Kollam is heart-rending & shocking beyond words. My thoughts are with families of the deceased & prayers with the injured.”

Mass deaths are reoccurring in India, where thousands gather for many celebrations throughout the year, but there is minimal crowd control. In October of 2013, more than 100 people died in a stampede during another Hindu festival in the central state of Madhya Pradesh.

Left: A volunteer shows the face of a victim, who died in a fire at the temple, to a relative to identify, outside a mortuary of a hospital in Kollam in the southern state of Kerala, India, April 10, 2016. Photo by Sivaram/Reuters