On Friday, President Trump embarked on the first foreign trip of his presidency. The five-city, nine-day tour begins in Riyadh, Saudi Arabia, where Trump will spend a jam-packed two days.

Giant billboards bearing photos of Trump and King Salman have been erected throughout the desert city. The American flag intermixed with the Saudi flag flies in Riyadh’s streets. On the Kingdom’s official website for the visit, a countdown clock ticks on the homepage underneath the banner “Together We Prevail.” Organizers are even planning a music concert featuring a curious collaboration between Toby Keith and a famed Arabian lute player.

Saudi Arabia, the birthplace of Islam and purveyor of an intensely conservative form of the religion, is a surprising place for Donald Trump’s diplomatic debut and a high-stakes gamble for both nations. Saudi Arabia has prepared an extravagant and public welcoming for the embattled president.

Despite declaring that “Islam hates us” on the campaign trail and issuing an executive order that has been criticized as anti-Muslim, Saudi and more than 50 nation heads converging on Riyadh this weekend are focused on a shared enemy: Iran and ISIS.

“They are not fans of the anti-Islamic part,” says Gary Sick, a professor at Columbia University’s Middle East Institute who served on the National Security Council under Presidents Ford, Carter, and Reagan. “But they might see it as worth it for the Iran part.”

The staggering number of events planned in Riyadh reveals the scope of the Kingdom’s ambitions and what’s at stake for the region. Three far reaching summit meetings are planned: On Saturday, Mr. Trump will meet with King Salman, the Saudi monarch. On Sunday, Mr. Trump is to meet with leaders of the following Gulf coalition states, including Bahrain, Kuwait, Oman, Qatar and the United Arab Emirates. Also Sunday is the trip’s cornerstone event: the Arab-Islamic American Summit where the president will meet with more than 50 leaders and high representatives across the Arab and Muslim world. 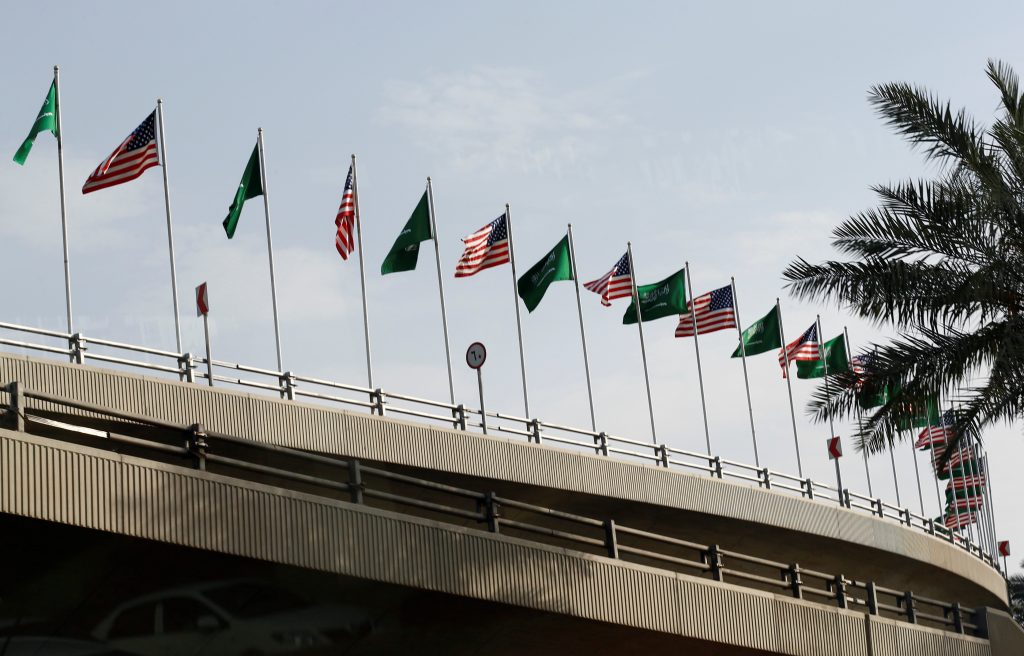 It is during the Arab-Islamic American Summit that Trump will deliver the showcase event: a hotly anticipated speech on Islam. Mr. Trump’s senior policy adviser Stephen Miller is reported to be writing the speech, according to CNN. “The speech is intended to unite the broader Muslim world against common enemies of all civilization and to demonstrate America’s commitment to our Muslim partners,” Trump’s national security adviser H.R McMaster said during a press briefing on Tuesday. With this speech, Trump will have to navigate a series of political tripwires. If the rhetoric is too soft, he risks alienating his supporters stateside; too critical and he could damage and publically embarrass a key regional ally.

“The speech is an incredibly risky move for the entire relationship,” says James Zogby, President of the Arab American Institute. “ It’s not just the leaders who will be hearing this but also the people.” Before Trump utters a word of his speech, however, he is already sending a clear message to Iran by delivering it in the adversarial territory of Saudi Arabia.

White House officials say Trump’s speech in Riyadh will serve as an answer to the landmark address to the Islamic world that Mr. Obama gave in Cairo in 2009, but Trump is giving his speech in a drastically different Middle East. Obama delivered his Cairo speech during the convulsing power dynamics of the Arab Spring–a mass uprising that toppled strongmen in the region like Egypt’s Hosni Mubarak and Libyan leader Mummar Ghadaffi. Trump delivers his address as many democratic demands of the Arab Spring have been reversed, as Syria’s civil war continues unabated, ISIS poses an ever-increasing threat and Iran is competing to fill the power vacuums all of this has caused.

A $110 billion arms deal between the United States and Saudi Arabia is expected to be finalized this weekend and could total more than $300 billion over 10 years. How the conversations and negotiations between the United States, Saudi and the other leaders evolve could be of huge import to Yemen, where Saudi is engaged in a proxy war with Iran. The two-year conflict has plunged the already impoverished country into near-humanitarian collapse.

At the Arab-Islamic American Summit, the Saudis may also be laying the groundwork for an Arab military coalition, similar to the NATO alliance, to counter Iran’s growing power in the region. Buy-in for the concept from the United States would help bolster its executability.

“The concept would be to bring together countries who have similar interests: anti-Islamic terrorism and anti-Iran and to build on these two factors and construct a workable agreement,” Sick said. This is a tall order, he added, since some countries attending the Summit–despite a shared enemy in Iran and ISIS–are deeply distrustful of each other.

“They are prepared to pay a high price to put together a wide ranging Sunni organization that will end as a barrier to Iran,” Sick said. “ As to who will cooperate, we will have to wait and see.”

This article has been corrected to reflect that Trump’s trip will last nine days.