TEHRAN, Iran — Iran’s president is making his first official visit to Iraq this week as he faces mounting pressure from hard-liners at home in the wake of the Trump administration’s unraveling of the nuclear deal.

Hassan Rouhani’s trip — billed as “historic and noble” by his foreign minister — is meant to solidify ties between Shiite power Iran and Iraq’s Shiite led-government, a strong Tehran ally. It is also Iran’s response to President Donald Trump’s snap December trip to Iraq and the American president’s comments that U.S. forces should stay in Iraq to keep an eye on neighboring Iran, with which Iraq shares a 1,400-kilometer-long (870 miles) border.

At the time, Trump slipped into Iraq at night, without stopping in Baghdad, to greet U.S. service members at a base far from the Iraqi capital where he extolled the American troops’ fight against the Islamic State group.

Rouhani later mocked Trump’s visit, asserting that flying into Iraq under the cover of darkness meant “defeat” for the U.S. in Iraq and asking the U.S. president why he didn’t make an “open and official visit.”

“You have to walk in the streets of Baghdad … to find out how people will welcome you,” Rouhani said at the time.

Rouhani’s visit to Iraq will provide an opportunity for reaching “serious understandings” between the two neighbors, Iran’s top diplomat, Mohammad Javad Zarif told the official IRNA news agency from Baghdad, where he was preparing for Rouhani’s three-day visit that starts on Monday.

After meeting with Zarif, Iraq’s Foreign Minister Mohammad Ali al-Hakim in a press conference that the Iraqi and Iranian delegations discussed a series of memorandums of understanding that will be signed tomorrow in the fields of oil and gas, land transport, railways, agriculture, industry, health and regarding the central bank.

We hope that these understandings will lead to the reconstruction of Iraq.”

Al-Hakim also said that they’d discussed the Syrian conflict and Syria’s access to the Arab League, without elaborating. 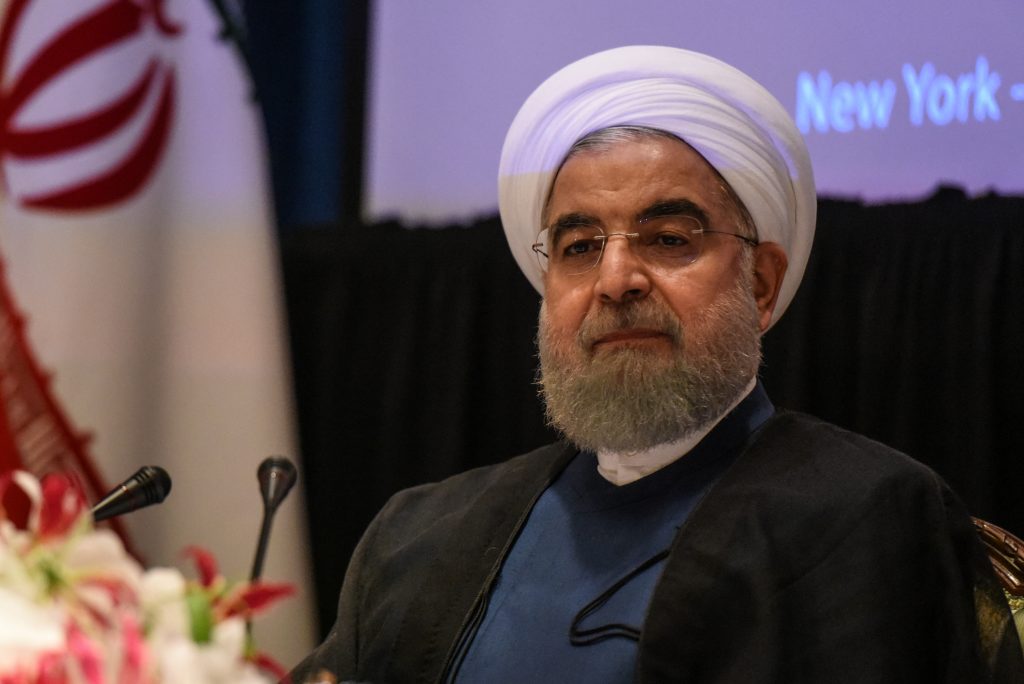 Rouhani, who had visited Iraq privately before becoming president, had planned an official visit in 2016 but it was cancelled over unspecified “executive” problems.

This time, Rouhani, who is on a second four-year-term, is particularly vulnerable because of the economic crisis assailing the Iranian rial, which has hurt ordinary Iranians and emboldened critics to openly call for the president’s ouster.

Tehran sees the U.S. military presence at its doorstep in Iraq as a threat — one that could also undermine Iran’s influence over Baghdad.

Zarif alluded to that on Sunday, saying that any country which tries to interfere with the good Iran-Iraq relations would “be deprived of opportunities for itself.”

Iran also sees Iraq as a possible route to bypass U.S. sanctions that Trump re-imposed last year after pulling the U.S. out of the 2015 nuclear deal between Tehran and world powers.

Last year, Iran’s exports to Iraq amounted to nearly $9 billion. Tehran hopes to increase the roughly $13 billion volume in trade between the two neighboring countries to $20 billion. Also, some 5 million religious tourists bring in nearly $5 billion a year as Iraqis and Iranians visit Shiite holy sites in the two countries.

Under former dictator Saddam Hussein, Iraq waged an eight-year war in the 1980s against Iran, a conflict that left nearly 1 million killed on both sides.