HONG KONG (AP) — Flights resumed at Hong Kong’s airport Wednesday after two days of disruptions marked by outbursts of violence that highlight the hardening positions of pro-democracy protesters and the authorities in the semi-autonomous Chinese city.

About three dozen protesters remained camped in the airport’s arrivals area a day after a mass demonstration and frenzied mob violence forced more than 100 flight cancelations. Additional identification checks were in place, but check-in counters were open and flights appeared to be operating normally.

Protesters spread pamphlets and posters across the floor in a section of the terminal but were not impeding travelers. Online, they also circulated letters and promotional materials apologizing to travelers and the general public for inconveniences during the past five days of airport occupations.

“It is not our intention to cause delays to your travels and we do not want to cause inconvenience to you,” said an emailed statement from a group of protesters. “We ask for your understanding and forgiveness as young people in Hong Kong continue to fight for freedom and democracy.” 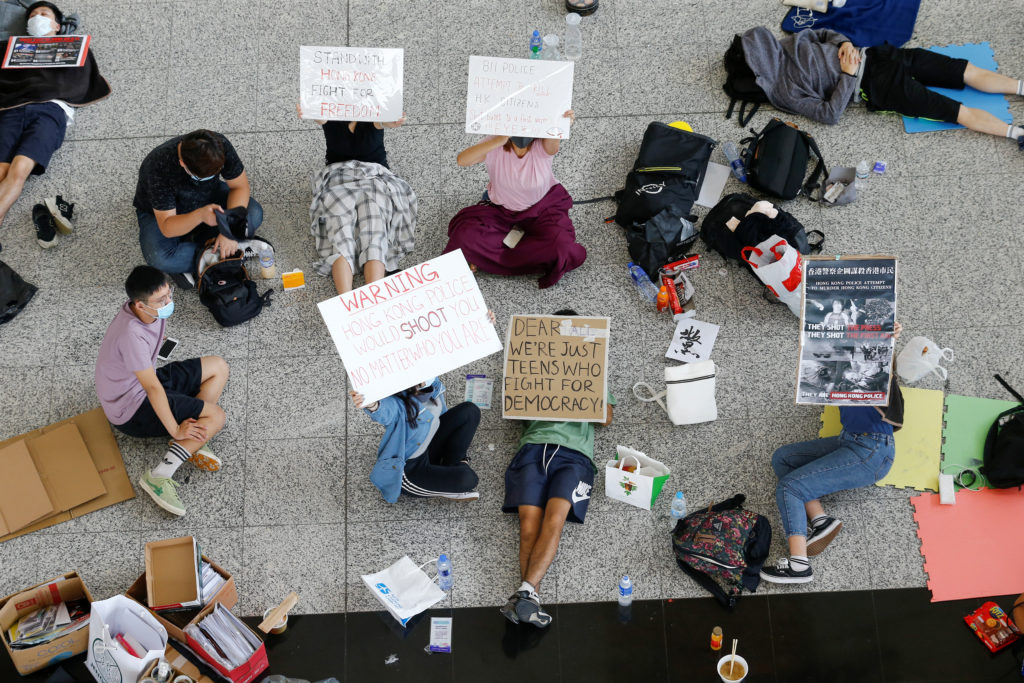 Anti-government demonstrators sit in a designated area of the arrival hall of the airport, after police and protesters clashed the previous night, in Hong Kong, China on August 14, 2019. Photo by Thomas Peter/Reuters

The airport’s management said it had obtained “an interim injunction to restrain persons from unlawfully and willfully obstructing or interfering” with airport operations. It said an area of the airport had been set aside for demonstrations, but no protests would be allowed outside the designated area.

The airport had closed check-in for remaining flights late Tuesday afternoon as protesters swarmed the terminal and blocked access to immigration for departing passengers. Those cancelations were in addition to 200 flights canceled on Monday.

Assistant Commissioner of Police Operations Mak Chin-ho said the men, aged between 17 and 28, were arrested for illegal assembly. Two were also charged with assaulting a police officer and possessing offensive weapons as riot police sought to clear the terminal.

More than 700 protesters have been arrested in total since early June, mostly men in their 20s and 30s, but also including women, teenagers and septuagenarians.

Mak gave no further details, but said additional suspects were expected to be arrested, including those who assaulted an officer after stripping him of his baton and pepper spray, prompting him to draw his gun to fend them off.

Hong Kong law permits life imprisonment for those who commit violent acts or acts that might interfere with flight safety at an airport.

More than 7 million travelers pass through Hong Kong’s airport each year, making it “not an appropriate place of protest,” Mak said.

“Hong Kong police have always facilitated peaceful and orderly protests over the years, but the extremely radical and violent acts have certainly crossed the line and are to be most severely condemned,” he said. “The police pledge to all citizens of Hong Kong that we will take steps to bring all culprits to justice.”

Hong Kong airline Cathay Pacific said in a statement it had canceled 272 flights over the past two days, affecting more than 55,000 passengers, while 622 departures and arrivals went ahead. 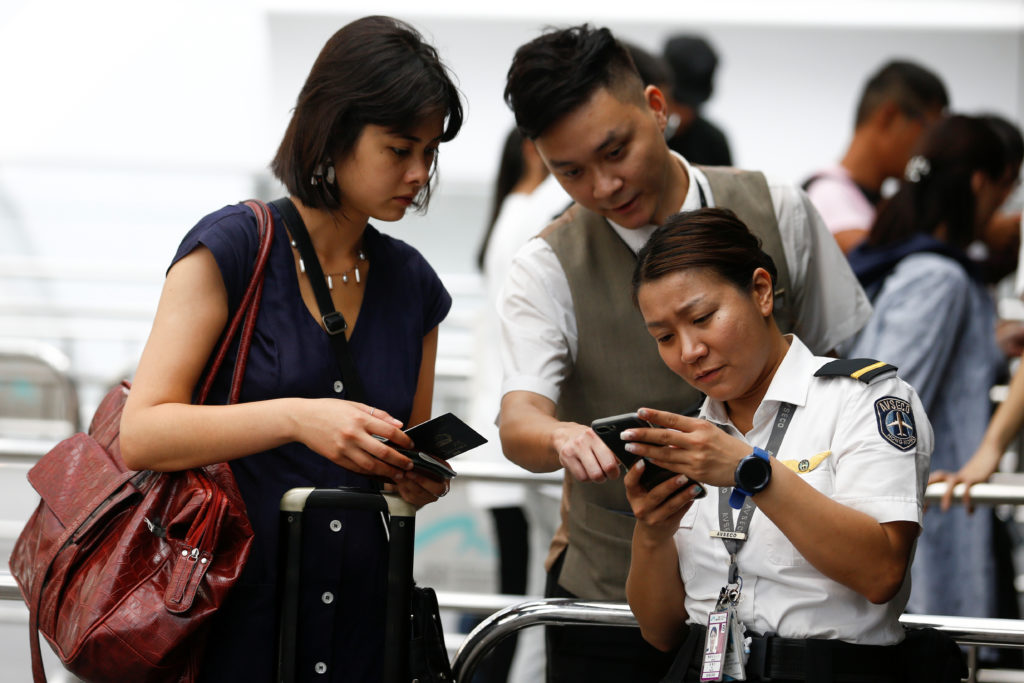 Security check people’s boarding pass and travel documents at an entrance to Terminal 1 of Hong Kong Airport, China on August 14, 2019. Additional identification checks were put in place after mass protests at the airport. Photo by Thomas Peter/Reuters

The airport disruptions have escalated a summer of demonstrations aimed at what many Hong Kong residents see as an increasing erosion of the freedoms they were promised in 1997 when Communist Party-ruled mainland China took over what had been a British colony.

While Hong Kong’s crucial travel industry suffers major losses, the city’s reputation as a well-regulated center for finance is also taking a hit. Some 21 countries and regions have issued travel safety alerts for their citizens traveling to Hong Kong, saying protests have become more violent and unpredictable.

The demonstrators are demanding Hong Kong leader Carrie Lam step down and scrap proposed legislation under which some suspects could be sent to mainland China, where critics say they could face torture and unfair or politically charged trials.

Lam has rejected calls for dialogue, saying Tuesday the protesters were threatening to push their home into an “abyss.”

In a statement Wednesday, the Chinese Cabinet’s liaison office in Hong Kong said the protesters had “entirely ruptured legal and moral bottom lines” and would face swift and severe repercussions under Hong Kong’s legal system.

“Their behavior shows extreme contempt for the law, seriously damages Hong Kong’s international image and deeply hurts the feelings of the broad masses of their mainland compatriots,” the statement said.

Most of the protesters left the airport Tuesday after officers armed with pepper spray and swinging batons tried to enter the terminal, fighting with demonstrators who barricaded entrances with luggage carts. Riot police clashed briefly with the demonstrators, leading to several injuries and prompting at least one officer to draw a handgun on his assailants.

The burst of violence included protesters beating up at least two men they suspected of being undercover Chinese agents. Airport security appeared unable to control the crowd, and paramedics later took both men away. Police have acknowledged using “decoy” officers, and some protesters over the weekend were seen being arrested by men dressed like demonstrators — in black and wearing face masks.

Hu Xijin, editor-in-chief of the Global Times, identified one of the men as a journalist at the nationalistic Chinese tabloid.

“Fu Guohao, reporter of GT website is being seized by demonstrators at HK airport,” Hu wrote on his Twitter account. “I affirm this man being tied in this video is the reporter himself. He has no other task except for reporting.”

Protesters on Wednesday apologized that some of them had become “easily agitated and over-reacted.” On posters, the demonstrators said they have been “riddled with paranoia and rage” after discovering undercover police officers in their ranks.

Earlier this week, the central government in Beijing issued an ominous characterization of the protest movement as something approaching “terrorism” — a label it routinely applies to nonviolent protests of government policies on the environment or in minority regions such as Xinjiang and Tibet.

President Donald Trump tweeted that U.S. intelligence believes that the Chinese government is moving troops to its border with Hong Kong and that, “Everyone should be calm and safe!”

While China has yet to threaten using the army — as it did against pro-democracy protesters in Beijing in 1989 — recent police exercises across Hong Kong’s border with mainland China were a sign of its ability to crush the demonstrations, even at a cost to Hong Kong’s reputation as a safe haven for business and international exchange.

Images on the internet showed armored personnel carriers belonging to the People’s Armed Police driving in a convoy Monday toward the site of the exercises.

Left: Police patrol the departure hall of the airport in Hong Kong after previous night's clashes with protesters, China on August 14, 2019. Photo by Thomas Peter/Reuters