Calm eventually returned, with most of the protesters leaving the airport hours after officers armed with pepper spray and swinging batons tried to enter the terminal, fighting with demonstrators who barricaded entrances with luggage carts. Riot police clashed briefly with the demonstrators, who said they planned to return to the airport early Wednesday.

More than 100 flights were cancelled on Tuesday, the fifth consecutive day that protesters occupied the airport. Airlines were still working through a backlog of more than 200 flights from Monday when the airport announced in the afternoon that check-in processes would once again be suspended. 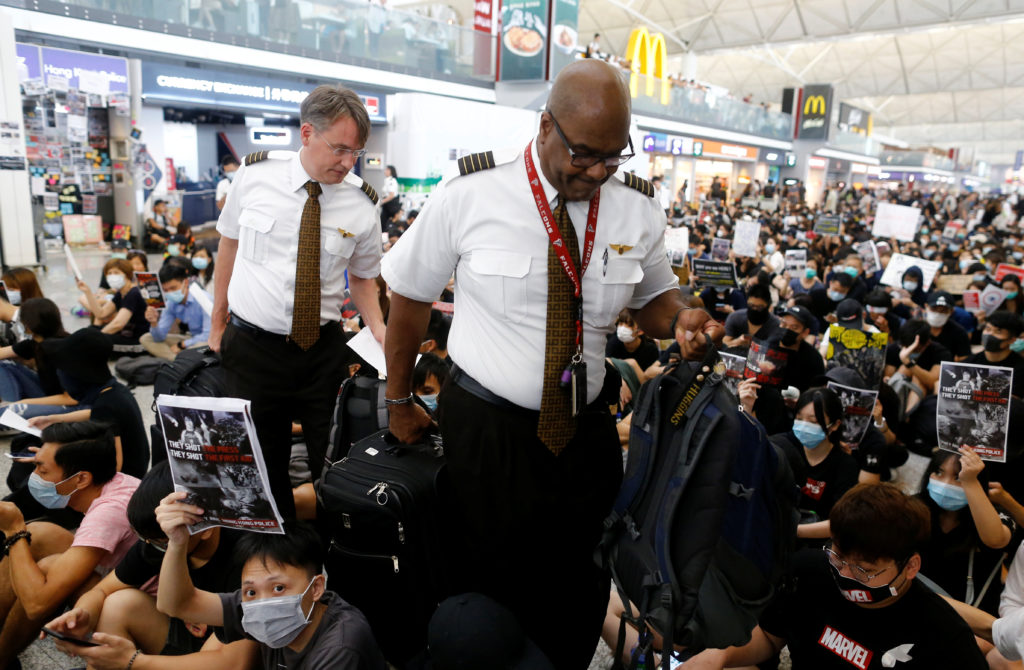 “Democracy is a good thing,” said signs that appeared to be aimed at mainland Chinese and foreign travelers. Many signs also contained apologies for the disruption to travelers: “We stand here to obstruct, only for one single reason. We love and care for Hong Kong. We hope you will understand. Sorry.”

The burst of violence included protesters beating up at least two men they suspected of being undercover agents and came the same day Hong Kong’s pro-Beijing leader warned that the demonstrators had pushed events onto a “path of no return,” highlighting the hardening positions on both sides.

In both instances, angry demonstrators pushed past people trying to hold them back and attacked the men, binding their wrists together and beating them to the ground. The two were eventually taken away by paramedics. 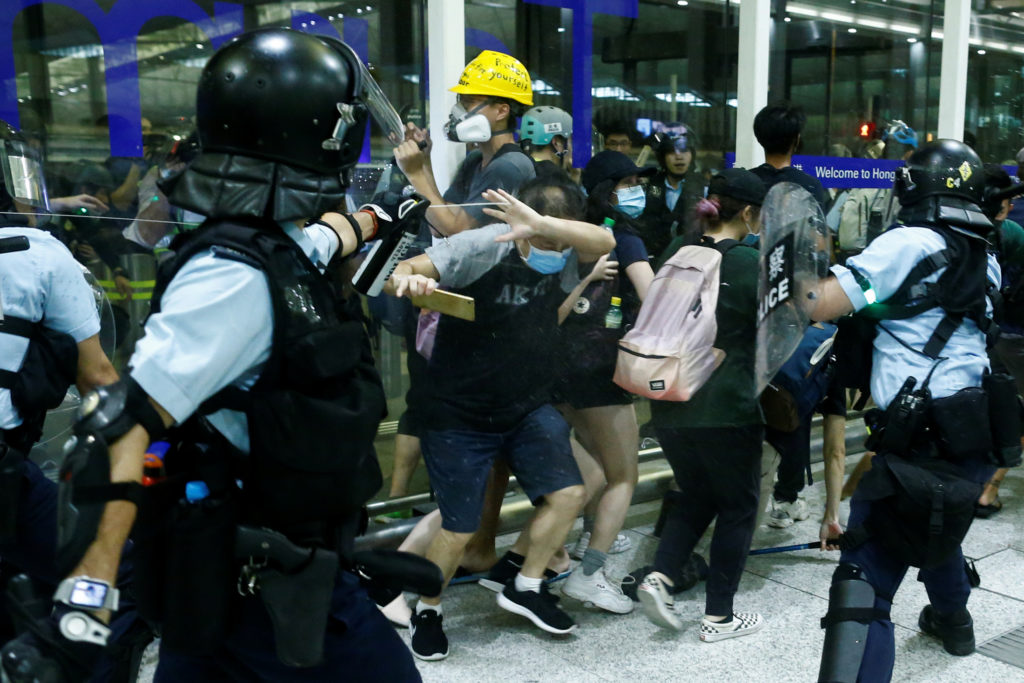 A police officer sprays pepper spray at anti-government protesters during clashes at the airport in Hong Kong, China on August 13, 2019. Photo by Thomas Peter/Reuters

In one case, protesters detained a man they claimed to be an undercover police officer from mainland China, pulled his identity documents from his wallet and encouraged journalists to photograph them. None of them showed that he was a police officer, though protesters claimed to have found his name on an online list of police officers in southern Guangdong province. The Associated Press could not independently verify the man’s identity.

Sally Tong, an 18-year-old protester, said they needed to hold him as evidence that mainland Chinese authorities are in Hong Kong to monitor the demonstrations. Tong said the man was dressed in black and wore a mask to look like one of them.

“We want to keep him here and investigate,” Tong said.

Hours later, the protesters apprehended another man from mainland China. But they could not agree on who they believed he was: Some said he was a gangster, others said he was a fake reporter, and still others said he was masquerading as a protester. As with the first man, some protesters tied his wrists together and poured water over his head, inciting laughter from some in the crowd. Airport security appeared unable to control the crowd.

Hu Xijin, editor-in-chief of the Global Times, a nationalistic Chinese tabloid, said the man was one of his reporters.

“Fu Guohao, reporter of GT website is being seized by demonstrators at HK airport,” Hu wrote on his widely-followed Twitter account. “I affirm this man being tied in this video is the reporter himself. He has no other task except for reporting.”

One protester used a U.S. flag to beat Fu as he lay on the floor in a fetal position. Other protesters and first aid workers attempted to stop some who tried to trample the man, while pro-democracy lawmaker Kwok Ka-ki crouched beside him and tried to calm the attackers. After a heated argument, protesters eventually allowed ambulance workers to take the man away on a stretcher.

Hong Kong police said they arrested five people for unlawful assembly, assaulting police officers and possessing weapons. Officials said in a statement that some protesters detained, harassed and assaulted a traveler and a journalist, and obstructed ambulance workers from taking the two men to the hospital. They said other protesters attacked a police officer and snatched a baton from him.

The airport disruptions escalated a summer of demonstrations aimed at what many Hong Kong residents see as an increasing erosion of the freedoms they were promised in 1997 when Communist Party-ruled mainland China took over what had been a British colony.

The early protests were in neighborhoods near government offices. However, the airport protest has had a direct impact on business travel and tourism. Analysts said it could make foreign investors think twice about Hong Kong, which has long prided itself as being Asia’s leading business city with convenient regional air links.

The central government in Beijing has ominously characterized the current protest movement as something approaching “terrorism” that poses an “existential threat” to citizens.

While Beijing tends to define terrorism broadly, extending it especially to movements opposing government policies in minority regions such as Tibet and Xinjiang, its use of the term in relation to Hong Kong raised the prospect of greater violence and the possible suspension of legal rights for those detained. 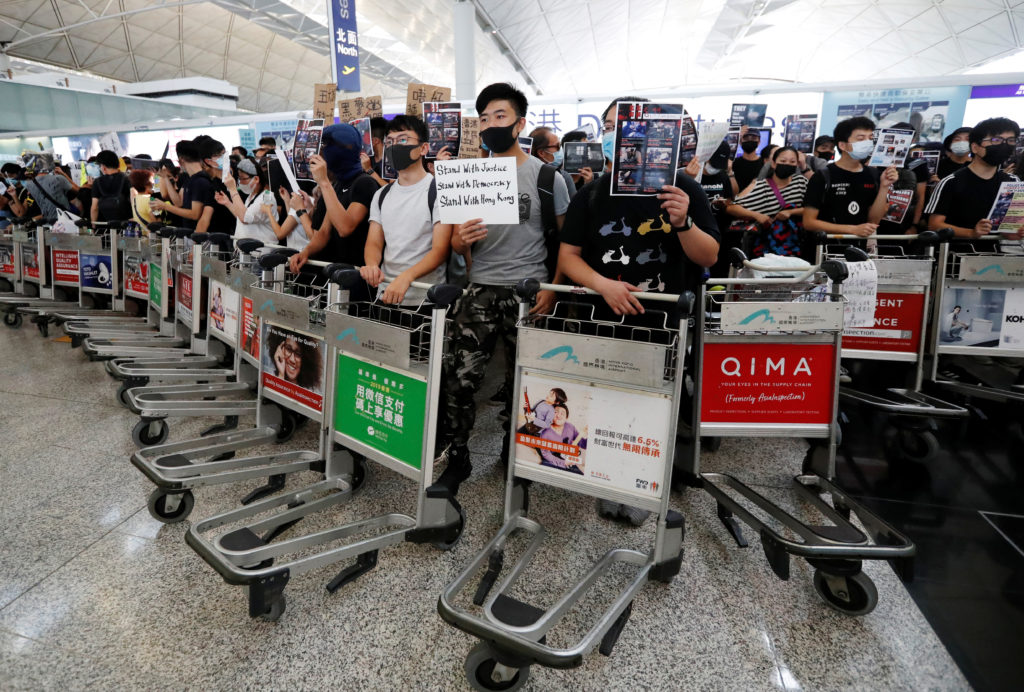 Anti-government protesters stand at a barricade made of trolleys during a demonstration at Hong Kong Airport, China on August 13, 2019. Photo by Issei Kato/Reuters

The black-clad demonstrators have shown no sign of letting up on their campaign to force Hong Kong leader Carrie Lam’s administration to respond to their demands, including that she step down and scrap proposed legislation under which some suspects could be sent to mainland China, where critics say they could face torture and unfair or politically charged trials.

Lam has rejected calls for dialogue, saying Tuesday the protesters were threatening to push their home into an “abyss.”

“After the violence has been stopped, and the chaotic situation that we are seeing could subside, I as the chief executive will be responsible to rebuild Hong Kong’s economy … to help Hong Kong to move on,” Lam said, without elaborating on what conciliatory steps she will take.

Meanwhile, paramilitary police were assembling across the border in the city of Shenzhen for exercises that some saw as a threat to increase force against the mostly young protesters who have turned out by the thousands in the past 10 weeks.

President Donald Trump tweeted that U.S. intelligence believes that the Chinese government is moving troops to its border with Hong Kong. He also tweeted that “Everyone should be calm and safe!” He provided no additional details.

While China has yet to threaten using the army — as it did against pro-democracy protesters in Beijing in 1989 — the Shenzhen exercises were a sign of its ability to crush the demonstrations, even at the cost to Hong Kong’s reputation as a safe haven for business and international exchange. Images on the internet showed armored personnel carriers belonging to the People’s Armed Police driving in a convoy Monday toward the site of the exercises.

The U.N.’s top human rights official condemned violence around the protests and urged both sides to settle their dispute through “open and inclusive dialogue.”

Rupert Colville, spokesman for U.N. High Commissioner for Human Rights Michelle Bachelet, said her office had reviewed evidence that police are using “less-lethal weapons in ways that are prohibited by international norms and standards.” That includes firing tear gas canisters into crowded, enclosed areas and directly at individuals, “creating a considerable risk of death or serious injury,” Colville said in a statement.

Passengers waiting for their flights to be rescheduled Tuesday sat behind empty check-in counters and on baggage drop belts while they watched the demonstration.

Ye Qi-ming, a 57-year-old Taiwanese man who was in Hong Kong for business, said he was impressed by the protesters’ level of organization.

The protesters gave him water throughout the day and made sure he felt safe, said Ye.

“I think it’s great,” he said. “In all my years, I’ve never witnessed such a democratic action.”

Left: Police clash with anti-government protesters at the airport in Hong Kong, China on August 13, 2019. Photo by Thomas Peter/Reuters