COLOMBO, Sri Lanka — Gotabaya Rajapaksa, a former defense official revered by Sri Lanka’s ethnic majority for his role in ending a bloody civil war but feared by minorities for his brutal approach, registered a comfortable victory Sunday in the nation’s presidential election.

Rajapaksa’s percentage of the vote was 52.25%, well above the 50% plus one vote needed for victory.

Premadasa conceded defeat to Rajapaksa, saying he would honor the decision of the people.

The results showcased deep ethnic and religious polarization in a country that has seen decades of conflicts and bloodshed since independence from the British in 1948. Minority Tamils and Muslims voted overwhelmingly for Premadasa, largely to stop a Rajapaksa victory. 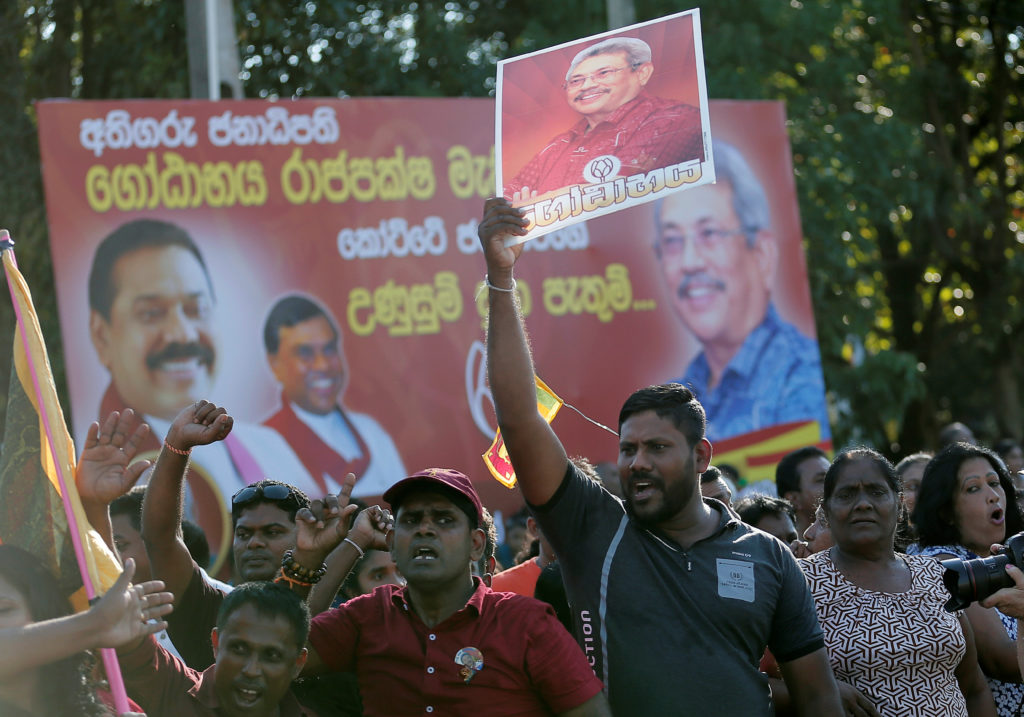 President-elect Rajapaksa appeared to try to allay minority skepticism in his speech after the official announcement of results.

“Therefore I am well aware that I am bound to serve every Sri Lankan irrespective of race or religion.”

Rajapaksa’s party headquarters in Colombo erupted with applause when the commissioner delivered the result on live TV.

His victory marks the return of a family ousted from power in 2015 elections amid constant reports of nepotism, skimming off development deals with China and alleged human rights violations during the end of the decades-long war with the Tamil Tiger rebels in 2009. The election also mirrors the global trend of populist strongmen appealing to disgruntled majorities amid rising ethno-nationalism.

Flanked by Buddhist monks at campaign events, Rajapaksa focused his message on Sri Lanka’s majority Sinhala Buddhist population, who comprise about 70% of the island’s citizens. The second-largest group are ethnic Tamil Hindus at 12.6%, while 10% are Muslims and 8% are Christian.

He accepted support from Buddhist nationalist clerics who demanded the resignation of Muslim Cabinet members and governors they said were interfering with the investigation of the Easter attacks.

The Muslim politicians temporarily stepped aside. 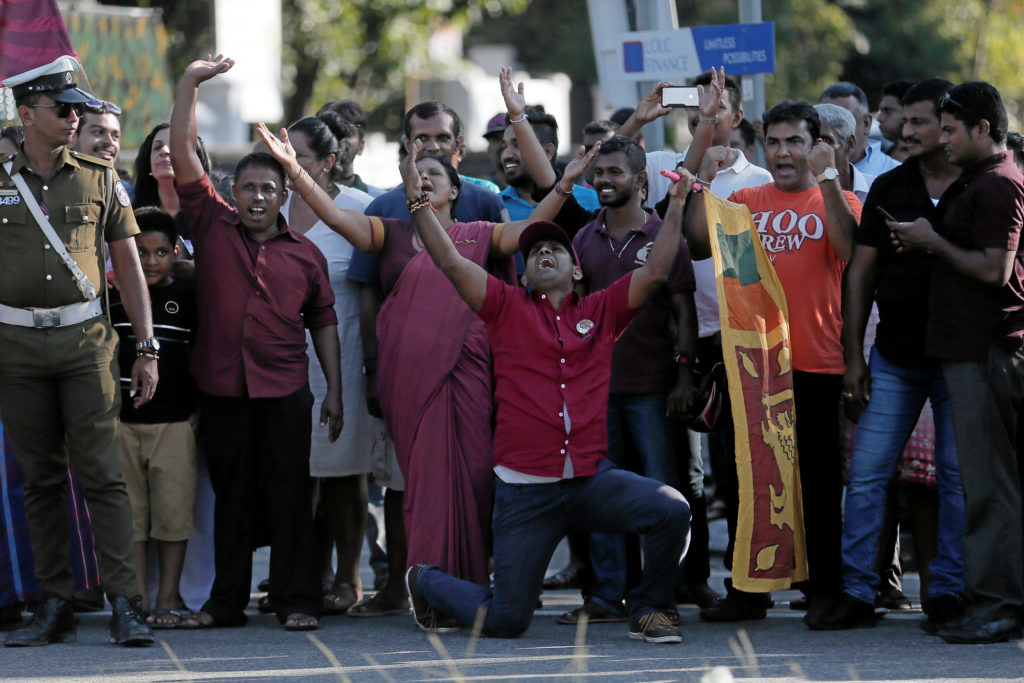 The campaign said Rajapaksa’s swearing-in ceremony would take place at Anuradhapura, a city about 200 kilometers (124 miles) from Colombo and the seat of the first Sinhalese kingdom known for a sacred tree that is said to be the southern branch of the Bodhi tree in India under which Lord Buddha attained enlightenment.

“A Sinhala Buddhist theocratic state has been given a people’s mandate now,” he said.

Premadasa swept the majority Tamil and Muslim districts in the country’s north and east, winning as much as 80% of the vote. In majority ethnic Sinhala areas, Gotabaya secured around 60%.

Sinhala Buddhists votes usually don’t vote as a bloc, unlike Sri Lankan minorities who have supported whatever party espoused policies comparatively favorable to them. 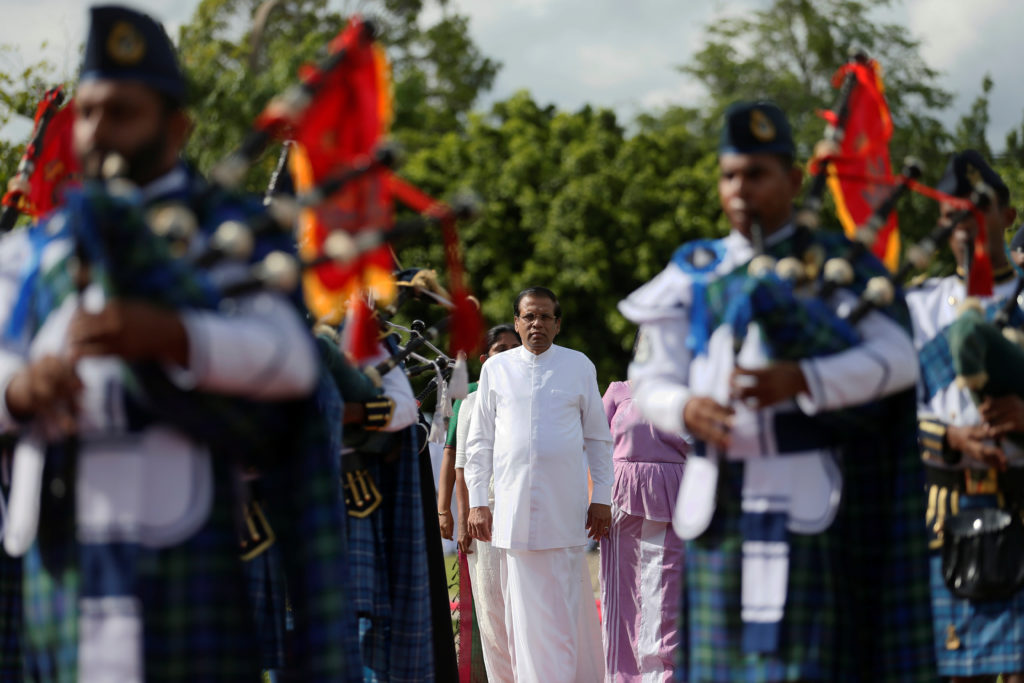 Sri Lanka’s President Maithripala Sirisena arrives at the commemoration ceremony to mark the 9th anniversary of the fallen soldiers during the final stage of war between Tamil Tigers and government army, in Colombo, Sri Lanka May 19, 2018. Photo by Dinuka Liyanawatte/ Reuters.

Rajapaksa’s victory will also be a blow to the post-civil war reconciliation process and truth-seeking on alleged wartime abuses by both government troops and the Tamil Tiger rebels. In the lead up to the election, Rajapaksa said that he would not honor a United Nations human rights resolution to investigate alleged abuses.

“He has won the war, but Sri Lanka is yet to win the peace and 10 years after, this is how the north and east reacts to the war victor,” said M.A Sumanthiran, lawmaker and spokesman for Tamil National Alliance, the country’s main Tamil party.

Rajapaksa has also promised to release military personnel detained for running an abduction ring for money in the pretext of counterterrorism, leading some to fear that the ethnic tensions that fueled the Tamil struggle for an independent state will only grow during his administration.

During the war that ended in 2009, Rajapaksa was accused of persecuting critics and overseeing squads that whisked away journalists, activists and Tamil civilians suspected of links to the Tamil Tigers. Some were tortured and released, while others simply disappeared. 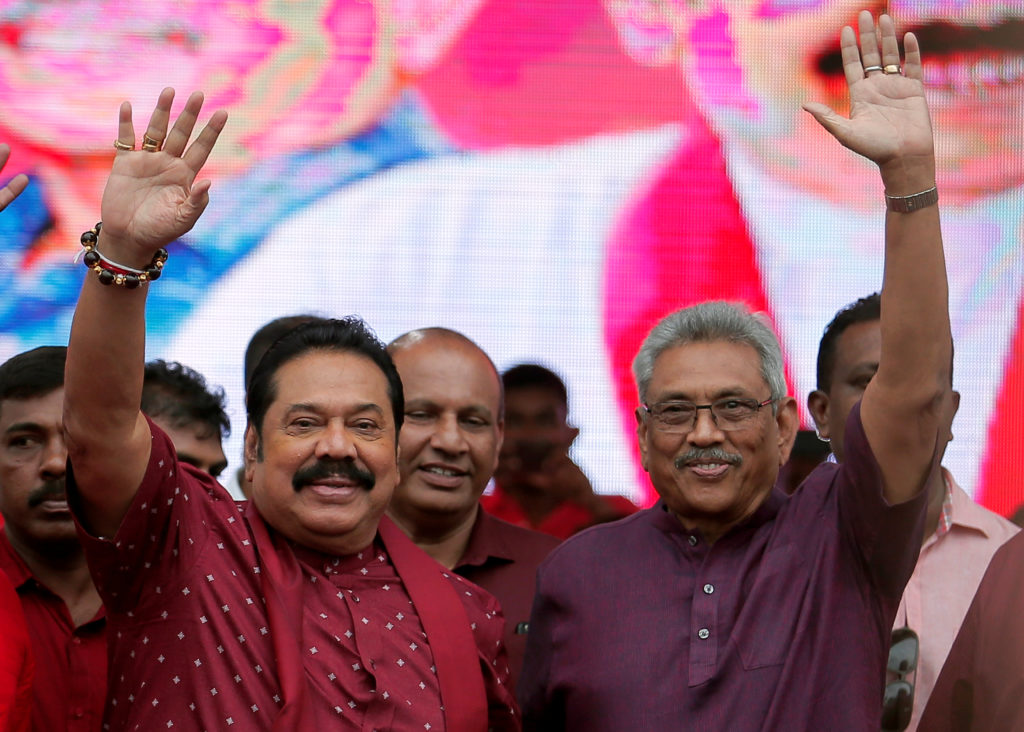 The Rajapaksa brothers are also accused of condoning rape and extrajudicial killings and deliberately targeting civilians and hospitals during the war. They deny the allegations.

The Rajapaksas did not lift emergency law even after the war ended, curtailing civil and media freedoms. Mahinda Rajapaksa’s government accepted Chinese loans for white elephant projects in the family’s home district of Hambantota, including to build a big commercial airport that is only being sparsely used.

Battling one of Asia’s highest debt-to-GDP ratios, Wickremesinghe’s government signed in 2017 a 99-year lease of the Chinese-built Hambantota port to a Chinese company, fueling public consternation over the loss of Sri Lanka’s sovereignty. The outgoing government also re-established ties with neighboring India and the United States, both of whom have large stakes in Sri Lanka as a buffer against China.

Even though the Cabinet will not immediately dissolve once a president changes, Sri Lanka’s Finance Minister Mangala Samaraweera on Sunday resigned to allow Gotabaya Rajapaksa to appoint a new minister.

Rajapaksa will inherit a tourism-dependent economy still recovering from the blasts, the first attack in Sri Lankan history targeting foreigners.

Left: President-elect Gotabaya Rajapaksa waves at his supporters as he leaves his house in Colombo, Sri Lanka November 17, 2019. Photo by Reuters.