Former U.S. allies in Iraq eyed for fight against ISIL 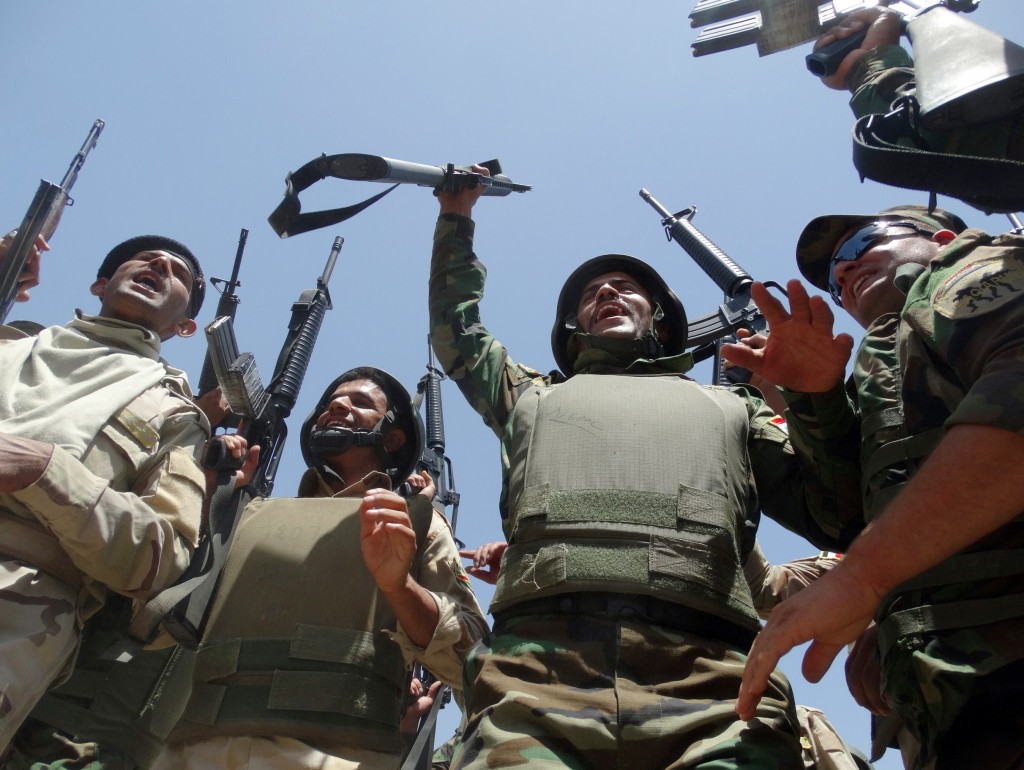 Iraqi troops raise up their weapons as they arrive to support the Sunni anti-Al-Qaeda militia Sahwa (Awakening) in its fight against anti-government militants, including from the jihadist Islamic State of Iraq and the Levant (ISIL). Photo: AFP/Getty Images

They were known as the Sahwa, or the Awakening Councils — Sunni militiamen who took extraordinary risks to side with U.S. troops in the fight against al-Qaida during the Iraq War. Once heralded as a pivotal step in the defeat of the bloody insurgency, the Sahwa later were pushed aside by Iraq’s Shiite-led government, starved of political support and money needed to remain a viable security force.

Now, the Obama administration is looking at the Sahwa, which still exist in smaller form, as a model for how to unite Sunni fighters against the rampant Islamic State of Iraq and the Levant (ISIL, also known as ISIS — Islamic State of Iraq and Syria) that has swept across most of the nation’s north. Also known as the Sons of Iraq — “sahwa” is Arabic for “awakening” — U.S. officials say they hope Sunnis will be similarly stirred to fight back against the new insurgency.

As many as 3,000 core ISIL fighters, many of them foreign, are believed to be in Iraq. But U.S. intelligence officials fear twice that many Iraqi Sunnis are vulnerable to being lured into the violence — pushing the country into an outright civil war. That has prompted the White House, State Department and CIA to look for incentives to keep as many disgruntled Sunnis as possible from joining the fight.

Being Sahwa can be dangerous. One Sunni militiaman, Abu Ahmed, said he began receiving text messages from Iraqi insurgent groups four months ago, threatening him if he remained a Sahwa member. He said he reported the threats to security forces, “but nobody cared.”

“The security officials told me that the safety of my family is my own responsibility, not theirs,” said Abu Ahmed, a father of five in Muqdadiyha, a Sunni enclave outside Baghdad. Like many Iraqis, he would only identify himself by his nickname out of fear for his family’s safety. “It seems that both the government and the insurgents hate Sahwa.”

The Obama administration knows it cannot recreate the original Sahwa security movement, which was supported and bolstered by American troops in Sunni-dominated areas of western and northern Iraq. Over a three-year period after the Sahwa campaign began in late 2006, the U.S. military paid them at least $370 million.

The Obama administration has no immediate plans to arm or fund the Sunni security militias, and there are too few American personnel in Iraq now to try to duplicate the original joint force.

It’s thought that Iraq’s Sunni neighbors — notably Jordan and Saudi Arabia — will likely use their cross-border tribal networks to bolster the security militias with financing or weapons, but it’s not clear whether Washington would even support that privately. The U.S. probably would want to vet the tribes before they received any money or arms, even from other nations, to ensure that the aid does not get passed along to ISIL or other extremist groups.

A similar process in Syria has delayed assistance to the frustrated moderate Sunni rebels in their three-year civil war to eject President Bashar Assad, whose Alawite sect is an offshoot of Shiism.

Secretary of State John Kerry was in the Mideast this week to push Iraq toward creating a more inclusive government that equally empowers Shiites, Sunnis and Kurds, and potentially replaces Shiite Prime Minister Nouri al-Maliki, as the best option to quell ISIL.

“The problem is, there are far too many tribes sitting on the sidelines,” said retired Army Col. Peter Mansoor, who helped build the original Sahwa program and is now a professor at Ohio State University. “But if the Iraqi government can re-form the alliance with the tribes, and present itself to the Arab Sunnis as a government they can support, then I think the portion of ISIL that’s composed of foreign jihadists could be defeated in short order.”

Kerry is also meeting with diplomats from Saudi Arabia and Jordan to discuss Iraq, and the issue of trying to keep Sunni fighters out of the insurgency will be high on their agenda, officials said. Requests by The Associated Press for comment from Saudi and Jordanian diplomats and intelligence officials were either refused or not immediately granted.

“We’re hearing from Sunni leaders across the board that they really want to do something about ISIL. They’re figuring out how to do it,” said one senior administration official who, like more than a half-dozen other U.S. officials interviewed, spoke on condition of anonymity because he was not authorized to discuss the issue by name.

He said many of the Sunni tribes first want to unseat al-Maliki.

Al-Maliki for years promised American officials he would hire the Sahwa to diversify the overwhelmingly Shiite government security forces and ensure the Sunni militiamen would continue to be paid once the U.S. troops left the country. But the vast majority of an estimated 90,000 Sahwa never got government jobs and, if they are paid by local authorities in the areas they protect, they receive less than a few hundred dollars each month.

Betrayed by al-Maliki’s broken promises, and threatened by insurgents, many Sahwa now feel that joining forces with extremists is a safer bet. Abu Ahmed is among them, and said he recently began fighting with a different Sunni extremist group that calls itself the Islamic Army.

“They are more moderate than ISIL, and they do not kill Shiites or other people randomly, and they are able to protect my family from ISIL,” Abu Ahmed said. He added, bitterly, “We have sacrificed a lot and risked our lives in fighting al-Qaida, and our reward from al-Maliki was less money.”

U.S. officials believe a significant number of Sunni tribal fighters are now fighting alongside ISIL, including the Sahwa and an estimated 1,000 former Baathists and others loyal to the late President Saddam Hussein. There are still large numbers of Sunni fighters who have not sided with ISIL, the officials said, but there is a fear they might join in if Iranian-backed Shiite militias begin playing a prominent role in the fighting. That would mirror the kind of sectarian bloodshed that brought Iraq to the brink of civil war at the time the Sahwa were created.

The U.S. hopes the majority of Sahwa and other disgruntled Sunnis will resist allying with ISIL simply because they reject extremism and an insurgency that, over the years, has killed thousands of civilians and bystanders in random attacks. And at least some Sunnis agree.

“I have no intention to join the insurgents because they do nothing but kill people,” said Abu Humam, who joined a Sahwa militia near Ramadi in 2007 and suffered severe leg wounds while fighting al-Qaida a year later. But he, too, voiced anger at al-Maliki, whom he accused of neglecting the Sahwa and making them easy targets for insurgents.

“Hundreds of Sahwa fighters have given up during the past months,” Abu Humam said. “Either they have stayed home or joined insurgent groups.”