From the Field: Violence Against Women in Guatemala

At the age of 15, Maria-Isabel Veliz was kidnapped, raped and murdered. She was working at a boutique in Guatemala City when she was abducted and forced into a van with duct tape over her mouth. She was never seen alive again.

It’s been nine years since Veliz’s body was found abused and abandoned in a field, along with another young woman, and her mother Rosa Franco de Veliz is still fighting for justice. The police have never arrested a suspect, despite witnesses and leads, and Franco de Veliz has received death threats for publicizing the case and demanding the investigation continue.

“The clothes my daughter was wearing [when she was found] had semen and blood and no tests were ever done,” Franco de Veliz told the NewsHour through an interpreter during a recent visit. “I promised her I was not going to stop until justice was done.”

Maria-Isabel’s case received international attention, and Franco de Veliz testified for the Inter-American Commission on Human Rights. But human rights activists say cases like Maria-Isabel’s are not rare. Estimates of the problem vary, but the Guatemala Human Rights Commission reports the country saw more than 700 violent deaths for women in 2008, and many more cases of abuse.

The PBS NewsHour global health team is in Guatemala this week reporting on the problem of femicide and the high levels of gender-based violence in this country. We spoke with Norma Cruz, director of the Survivors Foundation, who told us the pattern of kidnapping, rape and murder has become a common one.

Photos of some of the murdered women and girls whose cases Cruz has worked on line her office. 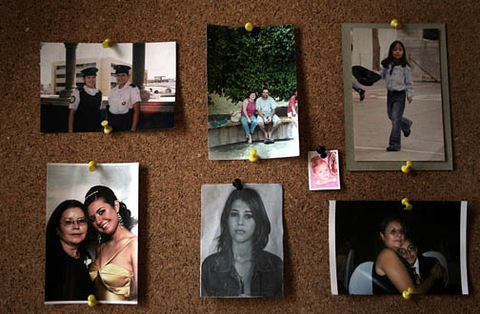 One recent case was weighing on Cruz heavily when we visited her– that of a young woman whose husband cut off her face when she tried to leave him. She lived and went through reconstructive surgery, but later went missing and her body was found late last year.

Cruz says women in Guatemala are scared to report abuse by spouses or others because perpetrators are rarely punished, and stories can be turned against the women themselves.

“First they are not believed, and second they are penalized–taken as responsible for these cases,” she said.

The NewsHour’s global health unit will have a full report on this issue, and what is being done to combat the problem, next month.

Left: Rosa Franco de Veliz holds a photo of her daughter, Maria-Isabel, in her home in Guatemala City.