Several gay men in Ivory Coast say they were attacked after the U.S. embassy published a photo of them offering condolences to the 49 victims in the Orlando shooting at a gay nightclub.

Six gay men signed a condolence book in honor of the Orlando victims on June 16, the same day Prime Minister Daniel Kablan Duncan had signed the book as well. The U.S. embassy published a photo of the six men with the caption, “LGBTI community signing the condolence book,” to its website.

Within days of the photo being posted, two of the men in the photo told the Associated Press on Wednesday that “an angry mob punched and kicked them while shouting anti-gay slurs.”

Four of the men, including the two men, said they were pressured from friends and family to flee their homes. Fearing for their safety, the men asked AP to remain anonymous.

One of the men in the photo, identified by Reuters as Louna, his first name, said a mob forced him to the ground and beat him.

Louna told Reuters that he may never be able to return home.

Spokesperson Elizabeth Ategou told AP that the embassy “deeply regrets that any individuals were attacked based on any kind of orientation they might have,” adding that embassy officials told the men to report the incident to police.

The men told AP they were not contacted before the photo was published. Instead, the embassy sought approval from three Ivory Coast organizations that advocate on behalf of lesbian, gay, bisexual and transgender individuals in the region, Ategou told AP. The people who granted approval of the photo were not in it.

The photo was removed from the embassy’s website late Wednesday.

Homosexuality is not criminalized in the West African country, but attitudes toward LGBT individuals are decidedly mixed elsewhere in Africa. 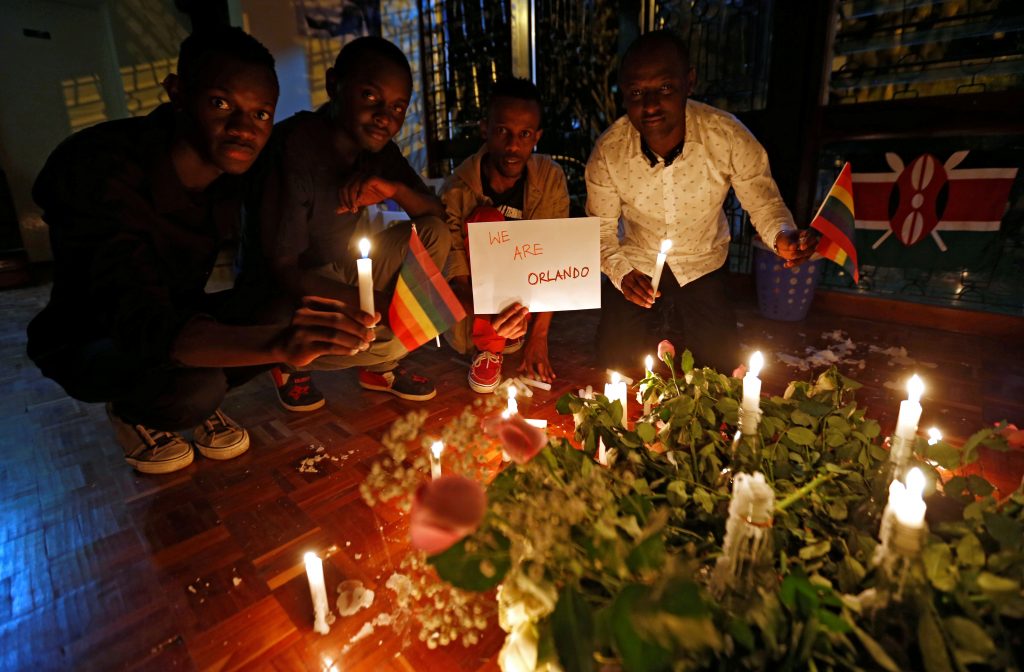 People light candles to pay tribute to the victims of the mass shooting at the Pulse gay nightclub in Orlando, U.S., in Kenya’s capital Nairobi. Photo by Thomas Mukoya/Reuters

In Kenya, gay sex is illegal and punishable up to 14 years in jail. In 2014, Nigeria outlawed gay marriage, involvement with gay rights organizations and public displays of same-sex relationships.

And while it’s not a crime to be gay in the Ivory Coast, there are no legal protections against attacks that target the LGBT community, the International Service for Human Rights has reported.

ISHR has also advised that “sexual minorities report periodic harassment from security forces and the general population” in the Ivory Coast.

Left: Jose Louis Morales cries on his knees as he is hugged by a woman at his brother Edward Sotomayor Jr.'s cross, that is part of a makeshift memorial for the victims of the Pulse night club shootings, in Orlando, Florida. Photo by Carlo Allegri/Reuters