Feminist icon Gloria Steinem along with a group of 30 women peace activists crossed the heavily fortified Demilitarized Zone that separates North and South Korea on Sunday, in what organizers called a “symbolic act of peace” meant to encourage dialogue and reunification between the two countries.

The rare crossing followed uncertainty over whether the activists would be allowed to cross the DMZ, one of the world’s most heavily secured borders, and criticism that the North Korean government was exploiting the event for propaganda purposes.

“We have accomplished what no one said can be done, which is to be a trip for peace, for reconciliation, for human rights and a trip to which both governments agreed,” Steinem, 81, told South Korean media after crossing. “We were able to be citizen diplomats.”

The international group of 30 women, which also includes Nobel laureates Leymah Gbowee and Mairead Maguire, traveled to North Korea to try to end the conflict between two Koreas, which are still technically at war with each other 70 years after partition. Sunday, May 24, is International Women’s Day for Peace and Disarmament.

“It’s hard to imagine any more physical symbol of the insanity of dividing human beings,” Steinem told the Guardian earlier in the week. “To me, to walk across it has huge, huge, huge importance.”

The group crossed at Kaeson, instead of at the symbolic village of Panmunjom, where the armistice that ended active hostilities in the Korean War was signed in 1953. 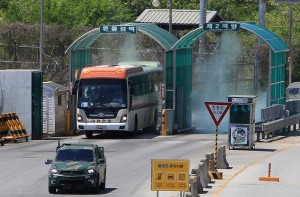 A bus carrying a group of international women activists arrives from North Korea on May 24, 2015 in Paju, South Korea. Photo by Chung Sung-Jun/Getty Images

They had initially planned to cross at Panmunjom, but changed plans because officials from South Korea and the United Nations Command responsible for security said they could not guarantee the activists’ safety.

Officials again refused to allow the women, carrying banners for peace, to walk across the border, so they crossed by bus instead.

North Korean state media reported Thursday on a symposium that the activists held in Pyongyang along with members of North Korean women’s groups, claiming that they called the United States “a kingdom of terrorism and a kingpin of human rights abuses,” according to a report by The Associated Press.

Christine Ahn, a peace activist who helped organize the event said, “Those words were never uttered” in response to the North Korean news reports. “We spoke about the impact of militarism around the world, including in Liberia, Colombia, Japan, northern Ireland as well as the United States.”

“We are operating in an environment where multiple sides will take our words out of context to advance their political agendas,” Ahn said, according to the AP.
The group plans to hold a peace walk and a symposium in South Korea.

Left: U.S. activist Gloria Steinem (C), and Nobel Peace Prize laureates Leymah Gbowee (R), from Liberia with other activists march to the Imjingak Pavilion along the military wire fences near the border village of Panmunjom on May 24, 2015 in Paju, South Korea. Photo by Chung Sung-Jun/Getty Images.