WIMBLEDON, England — Clutching her trophy 20 minutes after becoming Wimbledon’s champion, Simona Halep checked out the board inside Centre Court that lists tournament winners. Below all of the mentions of Serena Williams, her opponent in Saturday’s final, there already was inscribed: “Miss S. Halep.”

Halep was not concerned with preventing Williams from winning a 24th Grand Slam title. All Halep cared about was winning her first at the All England Club. And she played pretty much perfectly.

On top of her game right from start to finish, Halep overwhelmed Williams 6-2, 6-2 in stunning fashion for her second major championship. The whole thing took less than an hour as Williams lost her third Slam final in a row as she tries to equal Margaret Court’s record for most major trophies in tennis history.

“She literally played out of her mind. Congratulations, Simona. It was a little bit ‘a deer in the headlights’ for me,” Williams said. “So, I mean, whenever a player plays that amazing, you just kind of have to take your hat off and give them a nod of the head.”

How good was the No. 7-seeded Halep?

She made a mere three unforced errors, a remarkably low total and 23 fewer than Williams. 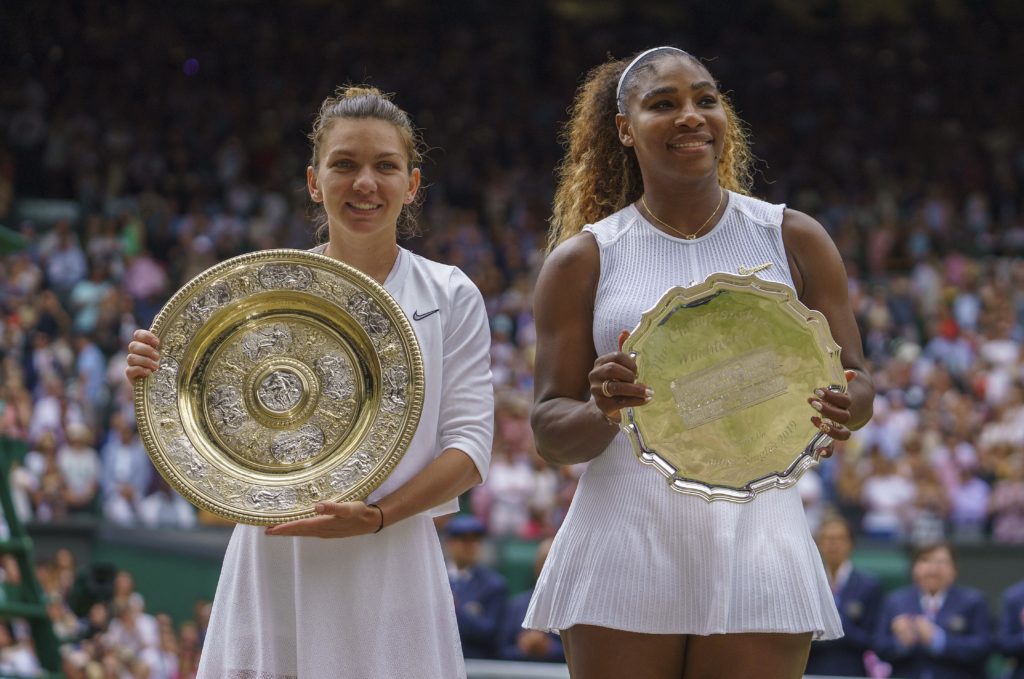 Jul 13, 2019; London, United Kingdom; Serena Williams (USA) and Simona Halep (ROU) pose with their trophies after the women’s final on day 12 at the All England Lawn and Croquet Club. Photo By Susan Mullane/USA TODAY Sports via Reuters

Not bad for someone who has been frank about how jittery she has gotten in past big matches and began the day having lost nine of 10 matchups against Williams. But after losing each of her first three major finals, Halep now has won two straight, including at last year’s French Open.

“Well, I had nerves. My stomach was not very well before the match,” said Halep, a 27-year-old Romanian, “but I knew there is no time for emotions. I just came on court and I gave my best.”

Couldn’t have been any better, really.

Williams also lost in straight sets against Angelique Kerber in the Wimbledon final a year ago, and against Naomi Osaka at the U.S. Open last September.

The 37-year-old American hasn’t won a tournament since the 2017 Australian Open, when she set the professional-era record of 23 Grand Slam championships (Court won 13 of her titles against amateur competition). Williams was pregnant when she won in Australia and then took more than a year off the tour; her daughter, Olympia, was born in September 2017.

Since returning to tennis, Williams has dealt with injuries but still managed to remain among the game’s elite. In part because of a bad left knee, she only had played 12 matches all season until Wimbledon.

Didn’t take long on Saturday for Halep to demonstrate this was not going to be easy for Williams.

Not by any means.

Showing off the talents and traits that once lifted her to No. 1 in the rankings, Halep never really gave Williams a chance to get into the match.

Halep tracked down everything, as is her wont. She didn’t merely play defense, though, managing to go from retrieving an apparent point-ending stroke by Williams to lashing a winner of her own in a blink.

Her returns were exceptional, repeatedly getting back serves that left Williams’ racket at 115 mph or more.

On this cloudy, cool afternoon, with the temperature in the low 70s (low 20s Celsius), Halep began with a pair of service breaks and even delivered the match’s first ace, at 106 mph, which put her out front 4-0 after 11 astonishing minutes. 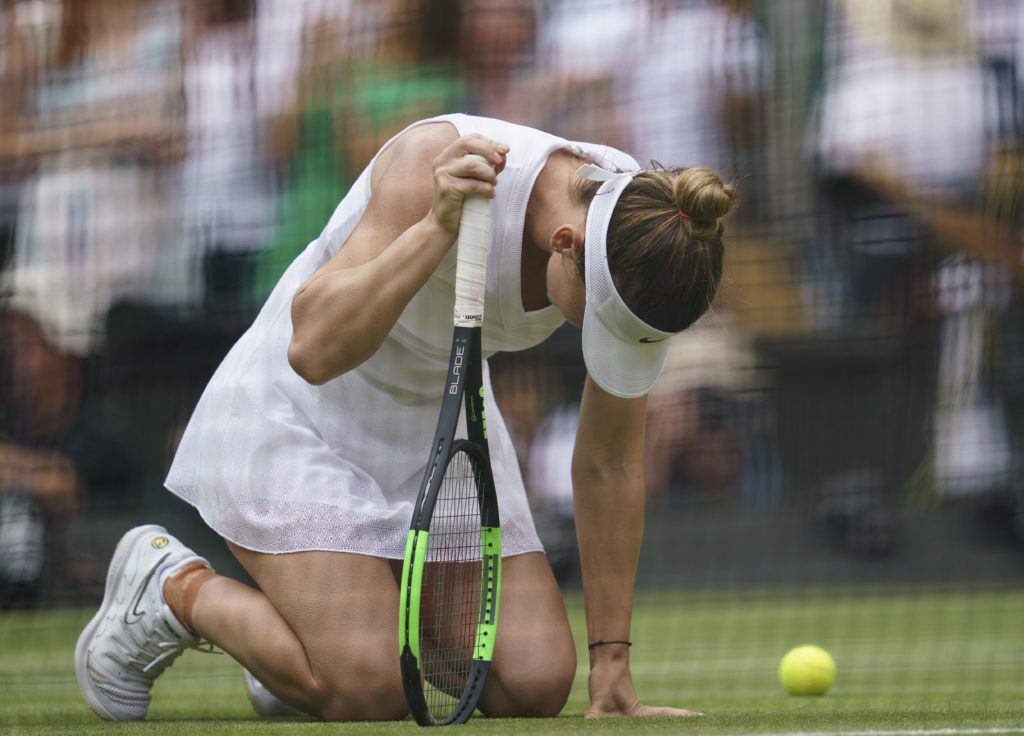 Jul 13, 2019; London, United Kingdom; Simona Halep (ROU) celebrates match point during her match against Serena Williams (USA) in the women’s singles final on day 12 at the All England Lawn and Croquet Club. Photo By Susan Mullane/USA TODAY Sports via Reuters

Halep won 14 of the first 18 points, with many in the crowd roaring for each of the rare ones that went Williams’ way. Halep produced eight winners before a single unforced error, avoiding a miscue until the seventh game.

Williams, in stark contrast, came out looking a bit tight, short-arming shots and accumulating nine unforced errors before conjuring up a single winner. She spoke after her semifinal victory about trying to remain calm on court, and that she did, even in the face of a player who was at her very best.

Williams would place a hand on her hip. Or put a palm up and look at her guest box, as if thinking, “What can I do?” Williams’ greatest show of emotion came after she stretched for a forehand volley winner on the second set’s second point. She leaned forward and yelled, “Come on!”

But the comeback never came. Halep broke to lead 3-2 in that set when Williams pushed a backhand long, and there wasn’t much left from there.

Halep only had been as far as the semifinals once at Wimbledon until now. But she was determined to change that and said she told the locker-room attendants at the beginning of the tournament she wanted to grab a title to earn lifetime membership in the All England Club.

“So here I am,” she said Saturday, the fortnight done, her trophy won. “It was one of my motivations before this tournament. So now I am happy.”

Left: Jul 13, 2019; London, United Kingdom; Simona Halep (ROU) poses with her trophy after defeating Serena Williams (USA) in the women's singles final on day 12 at the All England Lawn and Croquet Club. Photo By Susan Mullane/USA TODAY Sports via Reuters