HONG KONG (AP) — One of the world’s busiest airports canceled all flights after thousands of pro-democracy demonstrators crowded into Hong Kong’s main terminal Monday, while the central government in Beijing issued an ominous characterization of the protest movement as something approaching “terrorism.”

No new violence was reported by Monday evening, although the city remained on edge after more than two months of near-daily and increasingly bloody confrontations between protesters and police.

Beijing tends toward a broad definition of terrorism, including in it nonviolent protests of government policies on the environment or in minority regions such as Xinjiang and Tibet. Such a designation adds to the regime’s descriptions of protesters as clowns, criminals and traitors intent on overthrowing Chinese rule in Hong Kong.

Hong Kong International Airport said in a statement the demonstration “seriously disrupted” airport operations. Only flights that had already started boarding or those cleared for landing were allowed to use runways at the airport.

“All other flights have been canceled for the rest of today,” the airport statement said. It later said flights would resume at 6 a.m. Tuesday (2200 GMT, 6 p.m. EDT Monday). 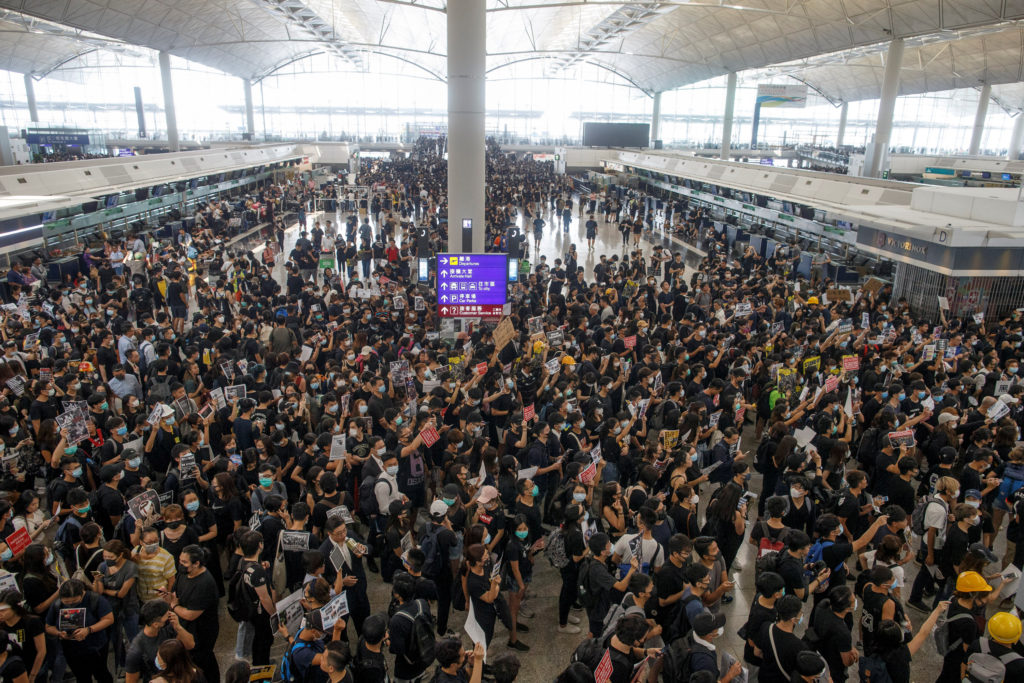 Joydeep Chakravarti, a software engineer whose connecting flight to San Francisco was canceled during a layover in Hong Kong, expressed frustration that he was told to leave the airport when he wanted to stay inside the terminal.

“I don’t know what’s out there, so I don’t want to leave. I didn’t make any plans for Hong Kong,” said Chakravarti, who had a carry-on bag with laptop, charger and an extra shirt while the rest of his luggage already was checked in on his Singapore Airlines flight.

A massive traffic jam soon formed on the highway leading back to Hong Kong’s city center. Some protesters were seen walking toward the airport amid the stifling heat.

The demonstrations that have drawn more than 1 million people at times call for democratic reforms and an independent inquiry into police conduct, with both protesters and police adopting ever-more extreme tactics.

In Beijing, the Cabinet’s Hong Kong and Macao Affairs Office issued a statement saying the situation in Hong Kong was “beginning to show the sprouts of terrorism” and constituted an “existential threat” to the population.

“One must take resolute action toward this violent criminality, showing no leniency or mercy,” said the statement, attributed to spokesman Yang Guang. “Hong Kong has reached an inflection point where all those who are concerned about Hong Kong’s future must say ‘no,’ to law breakers and ‘no’ to those engaged in violence.” 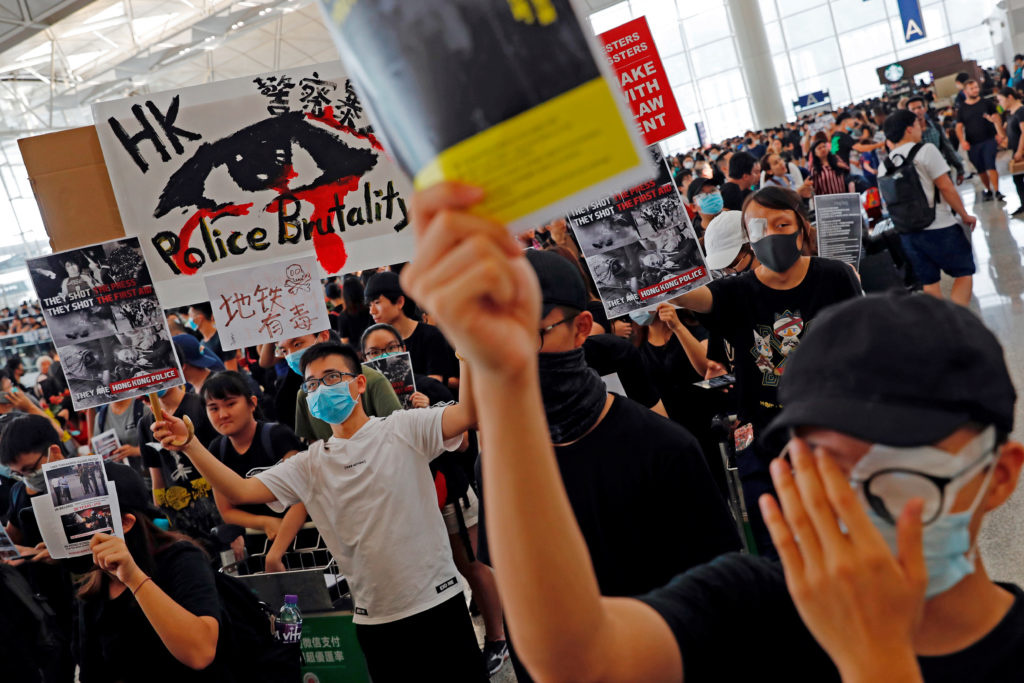 Anti-extradition bill protesters attend a mass demonstration after a woman was shot in the eye during a protest at Hong Kong International Airport, in Hong Kong, China on August 12, 2019. Photo by Tyrone Siu/Reuters

The chief executive of Hong Kong’s Cathay Pacific Airways said there would be “disciplinary consequences” for employees involved in “illegal protests,” as the airline joined businesses that have apologized to China in recent days over political flaps. Rupert Hogg warned in an internal memo that the company has a “zero tolerance approach to illegal activities,” apparently referring to unapproved protests.

Companies from luxury fashion brands to bubble tea shops are under pressure to distance themselves from protesters and declare their support for the ruling Communist Party’s position on Hong Kong. China had said it would bar any airline employees found to have taken part in demonstrations.

Earlier Monday, Hong Kong police showed off water cannons that could be deployed, a development that Amnesty International has warned could lead to serious injuries if misused in the densely populated city.

Legislators and journalists were invited to witness the display of crowd-control tactics, which came after a weekend of protests at the airport and in one of Hong Kong’s main shopping districts.

During the weekend protests, website Hong Kong Free Press showed footage of one arrest that appeared to include officers in plain clothes pinning a demonstrator to the ground. The young man, who said his name was Chow Ka-lok and asked for a lawyer, was shown with a bleeding head wound and said he had a broken tooth.

Police defended their tactics and tried to fend off criticism over widely shared videos from Sunday night’s clashes, including graphic images of Chow’s arrest and of a female protester who was shot in the eye. 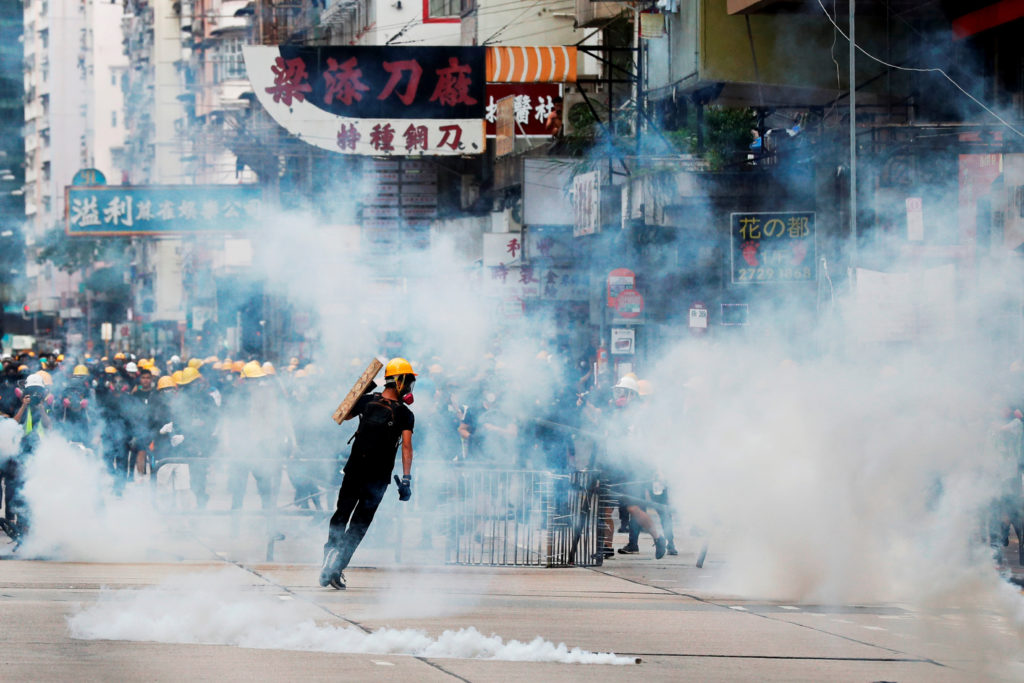 Anti-extradition bill protesters react from tear gas as riot police try to disperse them during a protest at Sham Shui Po in Hong Kong, China on August 11, 2019. Photo by Tyrone Siu/Reuters

Deputy Commissioner Tang Ping-keung acknowledged that police use decoy officers in some operations but would not go into details.

“Our decoy officers do not take part in any unlawful activities,” Tang insisted.

Police also have reported injuries, including eye irritation from laser pointers, burns from fire bombs and bruises and cuts from flying debris.

Protesters hurled bricks at officers and ignored warnings to leave before tear gas was used in the Sham Shui Po area, police said, calling a march there an “unauthorized assembly.”

Tear gas also was used in central Hong Kong’s Tsim Sha Tsui area on the Kowloon side of Victoria Harbour, and in Wan Chai on Hong Kong Island. At one point, protesters blocked a plaza to keep police out.

A train station in Kwai Fong filled with smoke after police fired tear gas inside. It was not clear how many protesters were in the station at the time, but it has been rare for officers to fire tear gas indoors.

Earlier, a large group of protesters marched down Hennessey Road, a main shopping drag in the Causeway Bay area, as a rally was held in nearby Victoria Park. Many wore face masks to shield their identities, and a few had helmets. Others just carried backpacks over the black T-shirts that have become their uniform.

The protest movement’s demands include the resignation of the Chinese territory’s leader, Carrie Lam, democratic elections for her successor, the release of those arrested in earlier protests and an investigation into police use of force.

A former British colony, Hong Kong was returned to China in 1997 under the principle of “one country, two systems,” which promises the city certain democratic rights not afforded to people on the mainland. But in recent years, some have accused Beijing of steadily eroding their freedoms.

Banners at the rally in Victoria Park read “Give Hong Kong back to us” and “Withdraw the evil law,” the latter a reference to an extradition bill that was the original spark for the protests. A large crowd sat under umbrellas, which are both a protest symbol in Hong Kong and protection from the summer heat.

At the airport, a flight attendant protesting on his day off, who gave only his surname, Lau, to avoid repercussions from his employer, said heavy-handed police tactics had alienated some people.

“The police have told a lot of lies to Hong Kong people. We cannot believe them anymore. We have to come here to protest,” Lau said. China has reportedly threatened to bar air crews taking part in protests.

Another protester, who identified herself only as Bea, said she took the day off from work to express her outrage because “I feel that I have to do something. … It’s just too sad to see what has happened. The police action has gone totally nonsensical.”

In an interview in Berlin, Chinese dissident artist Ai Weiwei said China’s leadership can now only resort to force, since it has failed in its quest to win hearts and minds in Hong Kong.

Ai, who has lived in Berlin since 2015, said U.S. President Donald Trump’s characterization of the protests as “riots” and as an issue between Hong Kong and China seems to have only encouraged the authorities.

The U.S. “should be supporting freedom, and democracy, and freedom of speech — for a major power to give that kind of signal to another, authoritarian society is very improper and it will cost more life and more blood,” he said.

“Hong Kong people will not be the loser, because they’re on the right side of history,” he said.

Left: Anti-extradition bill protesters look at an information screen showing cancelled flights at Hong Kong International Airport as they attend a mass demonstration after a woman was shot in the eye during a protest in Hong Kong, China August 12, 2019. Photo by Tyrone Siu/Reuters

LGBTQ asylum seekers persecuted at home and in U.S. custody