Protesters tossed firebombs and took their anger out on shops with mainland Chinese ties as they skirmished late into the evening with riot police, who unleashed numerous tear gas rounds on short notice, angering residents and passers-by.

Police had beefed up security measures ahead of the rally, for which they refused to give permission, the latest chapter in the unrest that has disrupted life in the financial hub since early June.

Some 24 people were hurt and treated at hospitals, including six with serious injuries, the Hospital Authority said.

Police did not give an arrest figure. One person was seen being handcuffed and taken away to a police van. 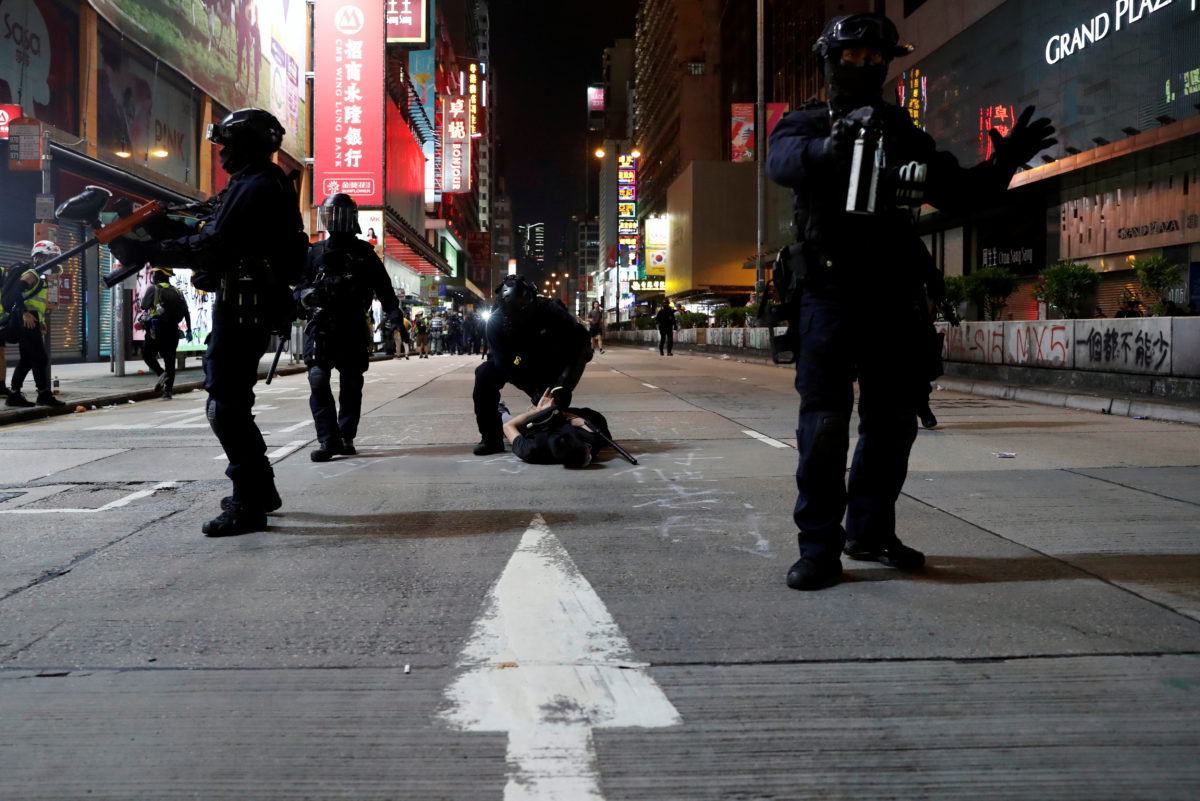 As the rally march set off, protest leaders carried a black banner that read, “Five main demands, not one less,” as they pressed their calls for police accountability and political rights in the semi-autonomous Chinese territory.

Supporters sang the protest movement’s anthem, waved colonial and U.S. flags, and held up placards depicting the Chinese flag as a Nazi swastika.

Many protesters wore masks in defiance of a recently introduced ban on face coverings at public gatherings, and volunteers handed more out to the crowd.

Matthew Lee, a university student, said he was determined to keep protesting even after more than four months. 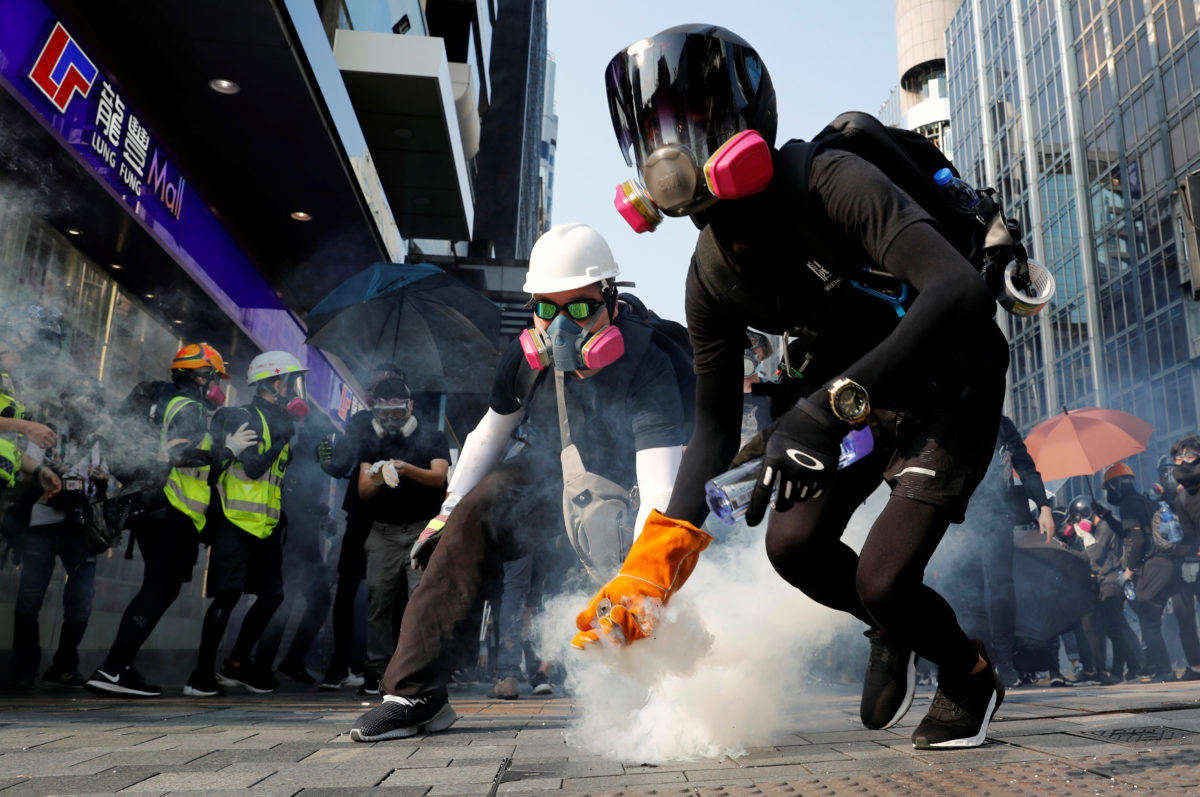 An anti-government protester holds a tear gas canister during a protest in Hong Kong, China October 20, 2019. Photo by Tyrone Siu/Reuters.

They tore up stones from the sidewalk and scattered them on the road, commandeered plastic safety barriers and unscrewed metal railings to form makeshift roadblocks.

A water cannon truck and armored car led a column of dozens of police vans up and down Nathan Road, a major artery lined with shops, to spray a stinging blue-dyed liquid as police moved to clear the road of protesters and barricades.

At one point, the water cannon sprayed a handful of people standing outside a mosque. Local broadcaster RTHK reported that the people hit were guarding the mosque and few protesters were nearby. The Hong Kong police force said it was an “unintended impact” of its operation to disperse protesters and later sent a representative to meet the mosque’s imam.

As night fell, protesters returned to the streets, setting trash on fire at intersections.

Residents jeered at riot police, cursing at them and telling them to leave. The officers, in turn, warned people that they were part of an illegal assembly and told them to leave, and unleashed tear gas to disperse the crowds.

Along the way, protesters trashed discount grocery shops and a restaurant chain because of what they say is the pro-Beijing ownership of the companies. They also set fire to ATMs and branches of mainland Chinese banks, setting off sprinklers in at least two, as well as a shop selling products from Chinese smartphone maker Xiaomi.

The police used a bomb disposal robot to blow up a cardboard box with protruding wires that they suspected was a bomb.

Organizers said ahead of the march that they wanted to use their right to protest as guaranteed by Hong Kong’s constitution despite the risk of arrest.

“We’re using peaceful, rational, nonviolent ways to voice our demands,” Figo Chan, vice convener of the Civil Human Rights Front, told reporters. “We’re not afraid of being arrested. What I’m most scared of is everyone giving up on our principles.”

The group has organized some of the movement’s biggest protest marches. One of its leaders, Jimmy Sham, was attacked on Wednesday by assailants wielding hammers.

On Saturday, Hong Kong police arrested a 22-year-old man on suspicion of stabbing a teenage activist who was distributing leaflets near a wall plastered with pro-democracy messages. A witness told RTHK that the assailant shouted afterward that Hong Kong is “a part of China” and other pro-Beijing messages.

The protest movement sprang out of opposition to a government proposal for an extradition bill that would have sent suspects to mainland China to stand trial, and then ballooned into broader demands for full democracy and an inquiry into alleged police brutality.