HONG KONG (AP) — Hong Kong leader Carrie Lam banned protesters from wearing masks Friday in a hardening of the government’s stance on the territory’s most disruptive crisis since it reverted to Chinese rule in 1997.

Lam announced the ban at an afternoon news conference where she decried a recent escalation of violence after four months of anti-government demonstrations.

Lam said she would go to the legislature later to get legal backing for the rule. She stressed that the use of emergency powers does not mean Hong Kong is in a state of emergency.

“People are asking can Hong Kong go back to normal? Is Hong Kong still a place where we can have our sweet home?” Lam said as she announced the ban.

“We must stop the violence,” she said. “Now, it’s all over Hong Kong.”

Yet even as Lam wrapped up her announcement, protesters in masks and concealing themselves under umbrellas gathered in central Hong Kong. 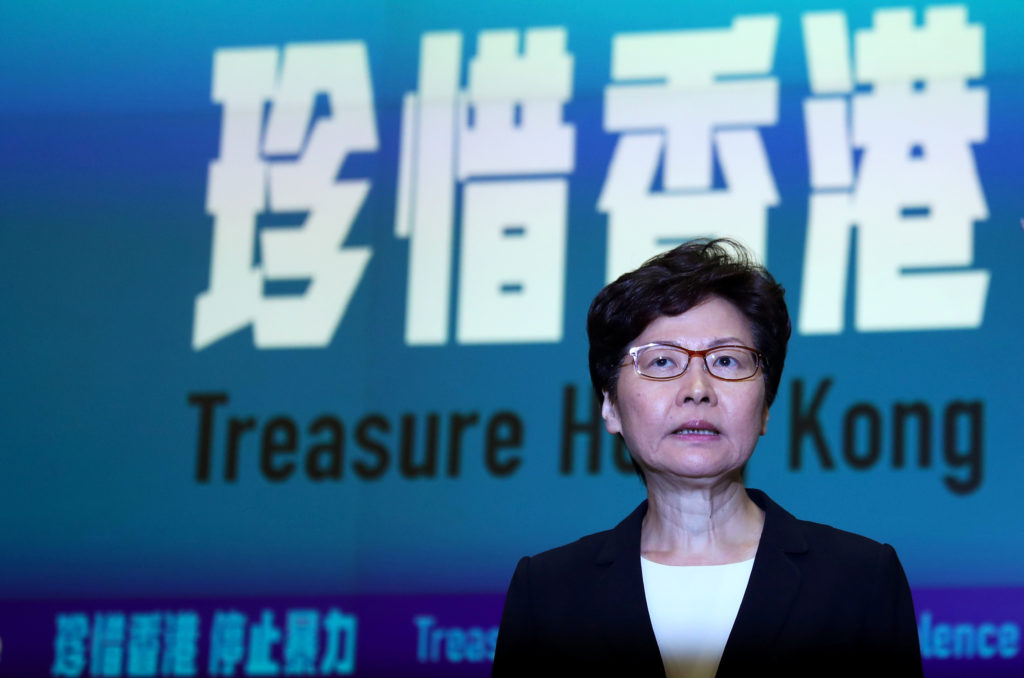 Lam said the ban targets violent protesters and rioters and “will be an effective deterrent to radical behavior.” Masks will be permitted for “legitimate need,” when their wearers can prove that they need them work, health or religious reasons.

The ban makes the wearing of full or partial face coverings, including face paint, at public gatherings punishable by one year in jail. A six-month jail term could be imposed on people who refuse a police officer’s order to remove a face covering for identification.

“We must save Hong Kong, the present Hong Kong and the future Hong Kong.”
– Carrie Lam

Lam wouldn’t rule out a further toughening of measures if violence continues. She said she would not resign because “stepping down is not something that will help the situation” when Hong Kong is facing “a very critical state of public danger.”

“We must save Hong Kong, the present Hong Kong and the future Hong Kong,” she said. “We can’t just leave the situation to get worse and worse.”

Thousands of masked protesters marched in the city’s business district before Lam spoke. They chanted “I want to wear face masks” and “Wearing mask is not a crime” as many cars, stuck in traffic due to the march, honked in support.

“Will they arrest 100,000 people on the street? The government is trying to intimidate us but at this moment, I don’t think the people will be scared,” one protester, who gave his surname as Lui, told an online live broadcast. 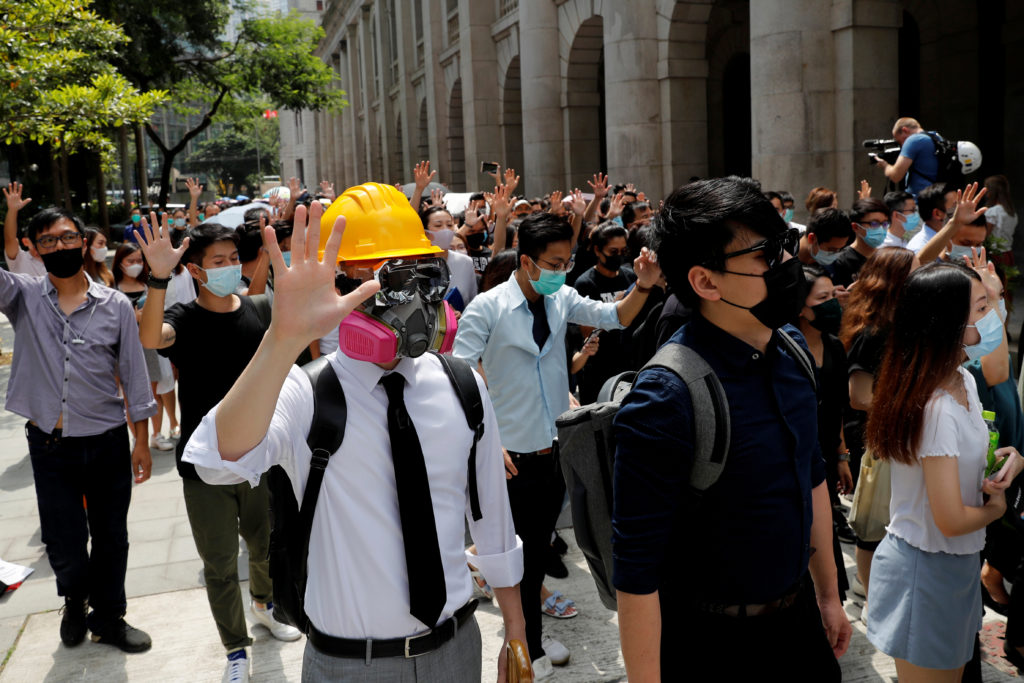 At the nearby Causeway Bay shopping area, a huge crowd occupied streets to protest the mask ban. Smaller rallies were held in several other areas.

Face masks have become a hallmark of protesters in Hong Kong, even at peaceful marches. As the use of police tear gas has become widespread, many young protesters have worn heavier duty gear including full gas masks and goggles.

Even peaceful masked marchers cite fears they could lose jobs and be denied access to schooling, public housing and other government-funded services if identified as having taken part in demonstrations.

Many also are concerned their identities could be shared with the massive state-security apparatus that helps keep the Communist Party in power across the border in mainland China, where high-tech surveillance including facial recognition technology is ubiquitous.

Analysts said the use of the Emergency Ordinance for the first time in over half a century set a dangerous precedent. The law, a relic of British rule enacted in 1922 to quell a seamen’s strike and last used to crush riots in 1967, gives broad powers to the city’s chief executive to implement regulations in an emergency.

“Even though the mask ban is just a small move under the Emergency Ordinance, it is a dangerous first step. If the anti-mask legislation proves to be ineffective, it could lead the way to more draconian measures such as a curfew and other infringement of civil liberties,” said Willy Lam, adjunct professor at the Chinese University. 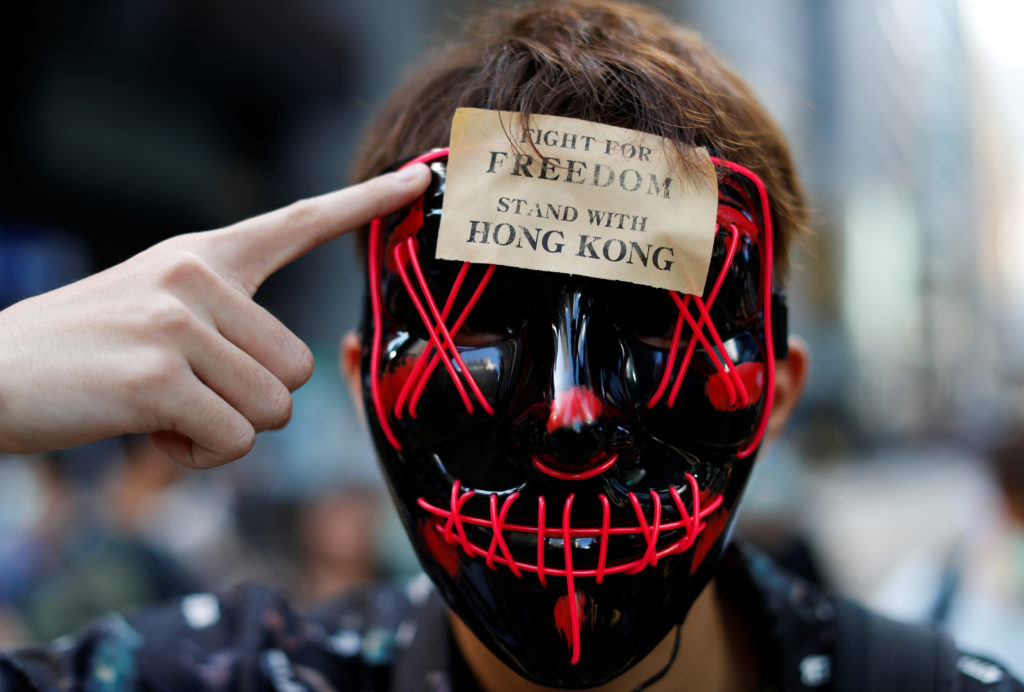 Lam bristled at a suggestion that the ban nudges Hong Kong closer to the authoritarian rule imposed by the Communist Party across the rest of China. She insisted she was not acting under orders from the central government in Beijing, which she visited this week when Communist Party leaders celebrated 70 years in power on Tuesday.

The ban followed widespread violence in the city Tuesday that marred China’s National Day and included a police officer shooting a protester, the first victim of gunfire since the protests started in June over a now-shelved extradition bill. The wounded teenager was charged with attacking police and rioting.

The movement has snowballed into an anti-China campaign amid anger over what many view as Beijing’s interference in Hong Kong’s autonomy. More than 1,750 people have been detained so far.

Activists and many legislators have said the mask ban could be counterproductive, impractical and difficult to enforce in a city bubbling with anger and where tens of thousands have often defied police bans on rallies.

The government last month withdrew the extradition bill, widely slammed as an example of the erosion of Hong Kong’s freedom, but protesters have widened their demands to include direct elections of the city’s leaders, an independent inquiry into alleged police brutality, the unconditional release of protesters and not characterizing the protests as riots.

“Five demands, not one less!” many protesters shouted during Friday’s rallies as they held up five fingers.