BEIJING (AP) — China’s Communist Party marked 70 years in power with a military parade Tuesday that showcased the country’s global ambitions while police in Hong Kong fought protesters in a reminder of strains at home.

Trucks carrying nuclear missiles designed to evade U.S. defenses, a supersonic attack drone and other products of a two-decade-old weapons development effort rolled through Beijing as soldiers marched past President Xi Jinping and other leaders on Tiananmen Square. Fighter jets flew over spectators who waved Chinese flags under a cloudy autumn sky. 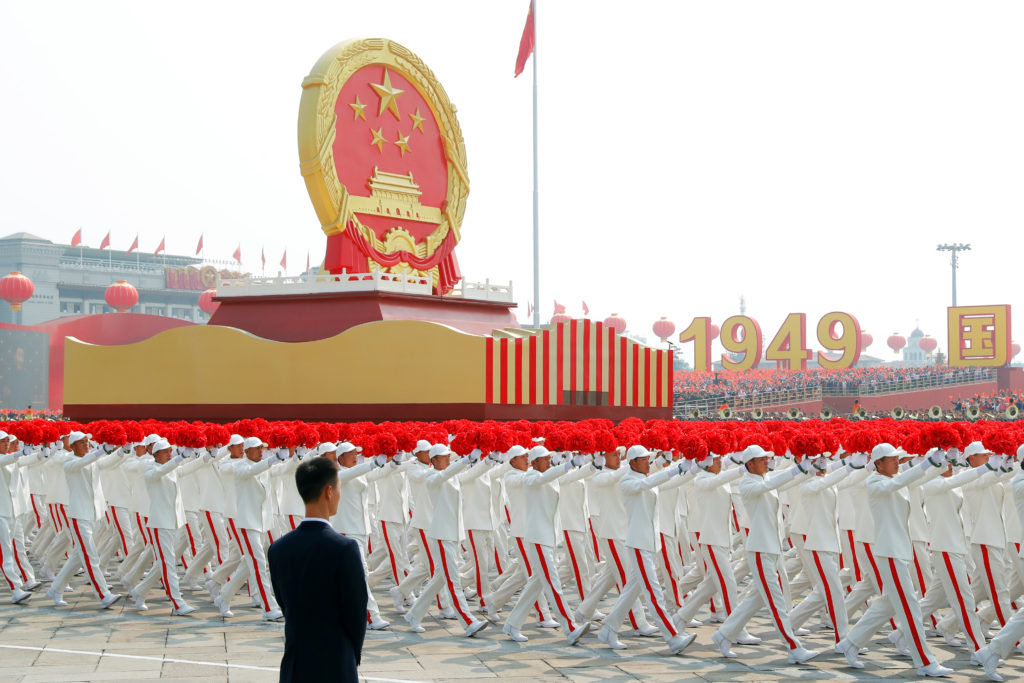 Performers travel past Tiananmen Square with a float featuring the Chinese national emblem during the parade marking the 70th founding anniversary of People’s Republic of China, on its National Day in Beijing, China October 1, 2019. Photo by Thomas Peter/Reuters

The display highlighted Beijing’s ambition for strategic influence to match its status as the second-largest global economy, even as Xi’s government suppresses dissent that illustrates the tensions between a closed, one-party dictatorship and a rapidly evolving society.

Those strategic goals include displacing the United States as the Pacific region’s dominant power and enforcing potentially volatile claims to Taiwan, the South China Sea and other disputed territories.

“No force can stop the progress of the Chinese people,” Xi said in a nationally televised speech. 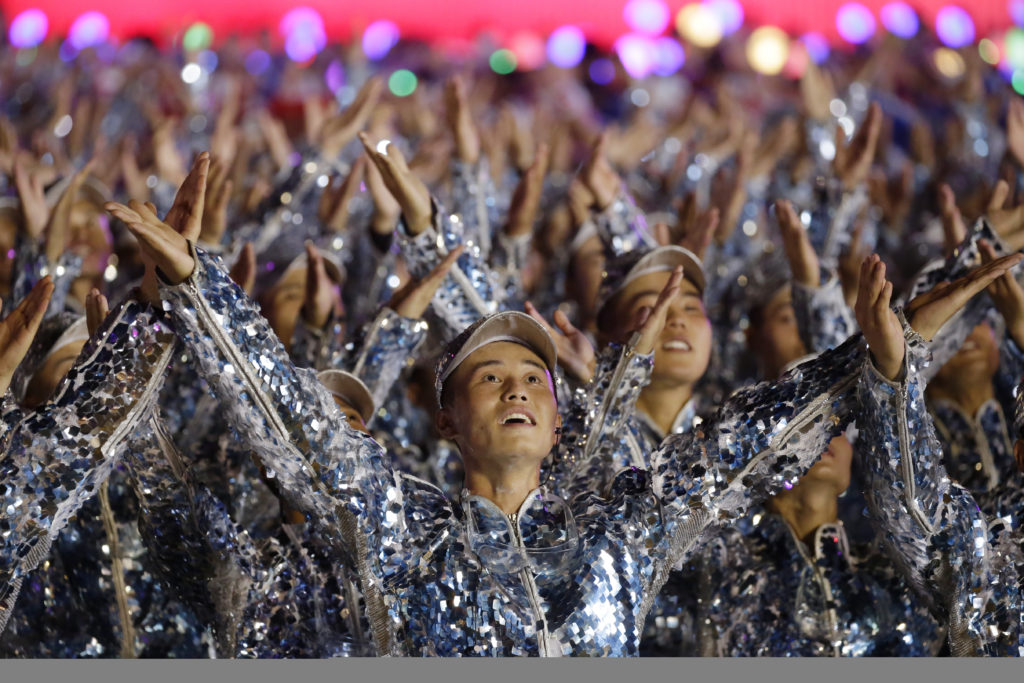 Performers take part in the evening gala marking the 70th founding anniversary of People’s Republic of China, on its National Day in Beijing, China October 1, 2019. Photo by Jason Lee/Reuters

In Hong Kong, pro-democracy protesters who wanted to embarrass the party during this year’s highest-profile political event fought with police as tens of thousands of people demonstrated.

One man was shot in the shoulder by a police officer, the first time a protester is known to have been shot. Video that spread quickly on social media appeared to show the officer opening fire as the protester came at him with a baton, striking the officer’s shooting arm. 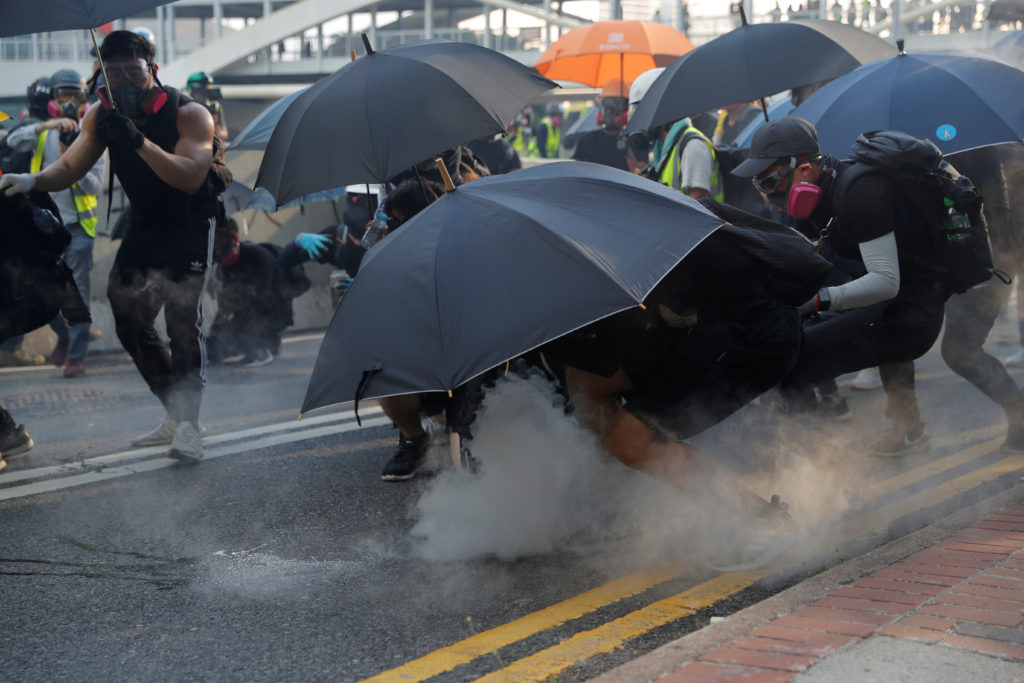 Anti-government protesters are seen amid tear gas during a protest on China’s National Day in Hong Kong, China on October 1, 2019. Photo by Susana Vera/Reuters

Protests in the former British colony have prompted concerns Beijing might intervene. But Xi promised in a speech Monday to stick to a commitment to allow the territory’s leaders to manage its affairs. 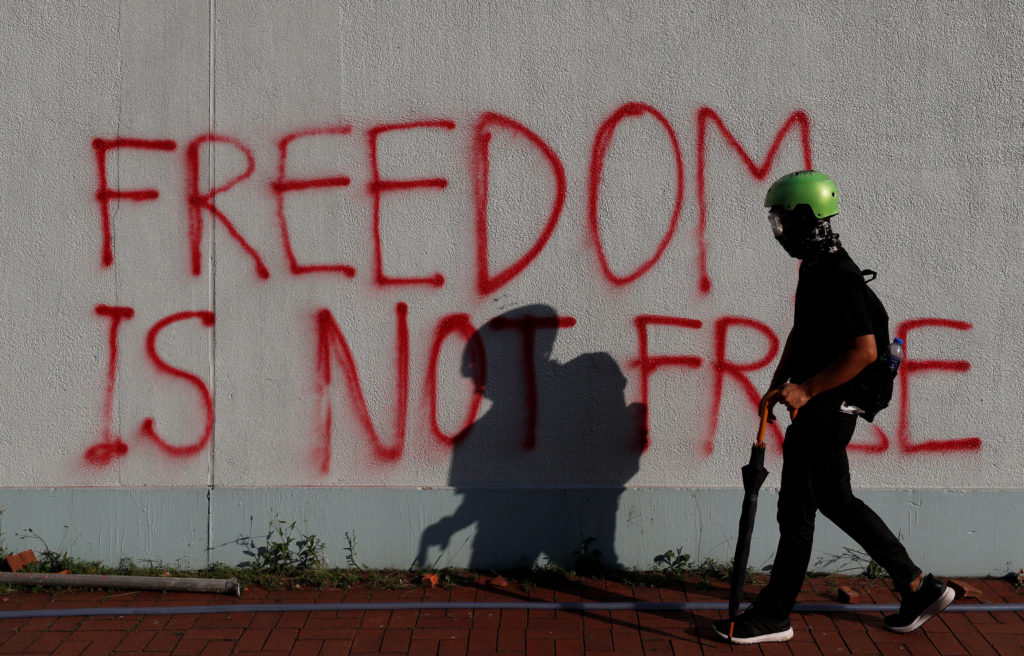 An anti-government protester walks in front of graffiti during a protest in Sha Tin district, on China’s National Day in Hong Kong, China October 1, 2019. Photo by Jorge Silva/Reuters

Xi was joined on the Tiananmen rostrum by Premier Li Keqiang, former Presidents Hu Jintao and Jiang Zemin and other party figures. Authorities said the event would include 15,000 troops, more than 160 aircraft and 580 pieces of military equipment.

The anniversary commemorates the Oct. 1, 1949, founding of the People’s Republic of China by then-leader Mao Zedong following a civil war with the Nationalist government, which retreated to Taiwan.

The display of “high-quality weapons” is meant to show Beijing is on track to “rejuvenate China in the global arena,” said Henry Boyd, a military analyst at the International Institute of Strategic Studies in London.

“The message is, this is a great power China to be a taken seriously,” Boyd said. “It is not to be treated as an inferior.”

Hong Kong Chief Executive Carrie Lam attended with a delegation of Hong Kong officials and dignitaries in a show of unity with the ruling party.

Xi, wearing a gray Mao jacket, rode in an open-topped limousine past dozens of rows of truck-mounted missiles, armored personnel carriers and other military gear. 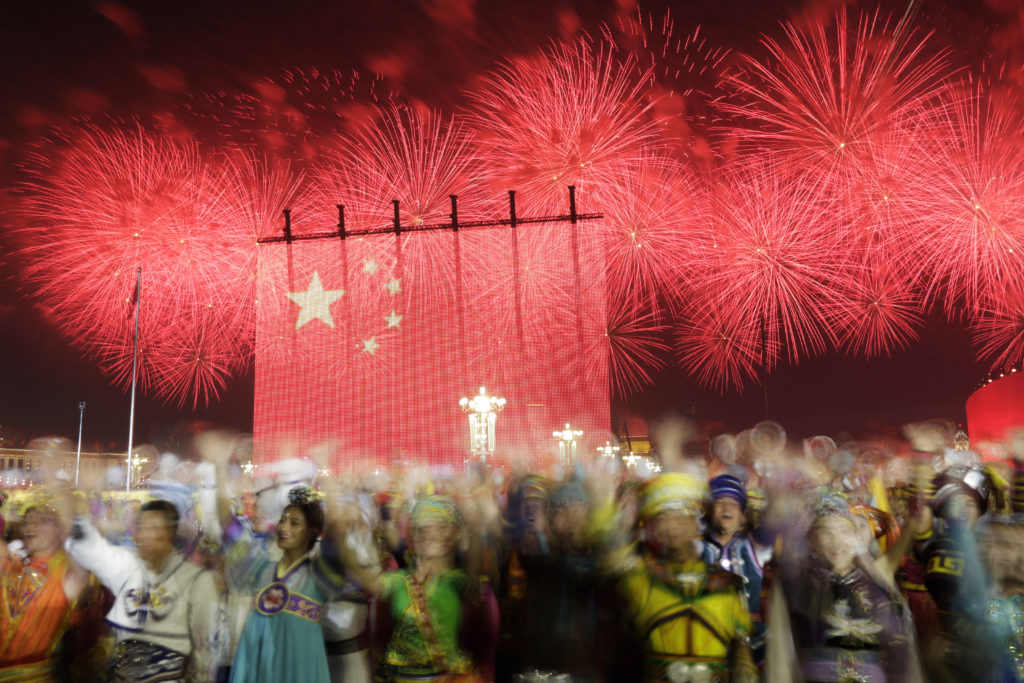 Supported by China’s economic boom, military spending has risen 400% over the past decade as Beijing tries to match the United States, Russia and Europe in weapons technology. Foreign analysts say China is, along with the United States, a leader in unmanned aircraft and is catching up in missiles and some other areas.

The parade “aims to show the outside world China’s confidence” and ability to protect its “overseas interests,” said Yue Gang, a retired army colonel and military commentator.

Despite “great improvements,” China “should not relax vigilance and needs to continue to make efforts,” Yue said.

The People’s Liberation Army, the world’s biggest military with 2 million men and women in uniform, also is working on fighter planes, the first Chinese-built aircraft carrier and a new generation of nuclear-powered submarines.

A closely watched weapon unveiled Tuesday was the Dongfeng-17, a nuclear-armed glider that foreign analysts say is designed to maneuver at high speed to evade anti-missile defenses. That could help counter American systems like those deployed in South Korea and Japan.

Another was an unmanned aircraft dubbed Sharp Sword that, if equipped with bombs or missiles, would be the first combat drone developed by a power other than Washington and its European allies.

Beijing’s emphasis on missiles and other long-range weapons reflects official ambitions, after decades as an army confined to land, to project power beyond Chinese shores.

Analysts say the long-range H-6N bomber, shown for the first time Tuesday, could be used to attack U.S. or other forces in the Pacific.

Another missile displayed, the Dongfeng-41, is believed to have the world’s longest range at up to 15,000 kilometers (9,400 miles). Analysts say it may be able to reach the United States in as little as 30 minutes and carry as many as 10 warheads to hit separate targets.

China’s military spending last year was the world’s second-highest at an estimated $250 billion, according to the Stockholm International Peace Research Institute. The United States, with a force of 1.3 million, led in spending at $650 billion, or more than 2½ times China’s level. 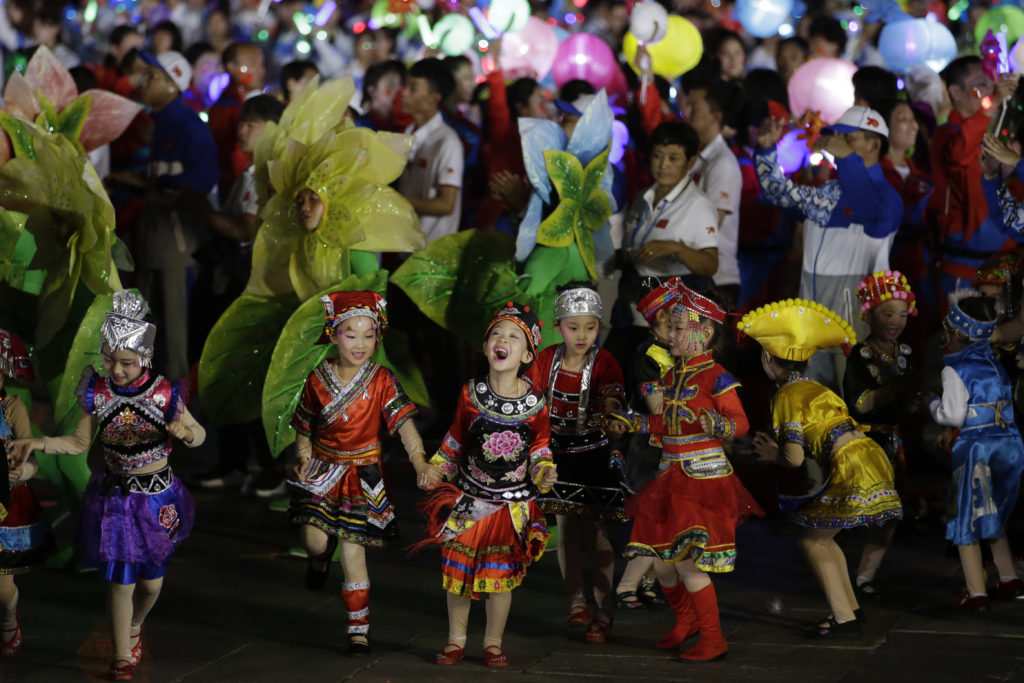 Performers take part in the evening gala marking the 70th founding anniversary of People’s Republic of China, on its National Day in Beijing, China on October 1, 2019. Photo by Jason Lee/Reuters

China’s nuclear arsenal has about 280 warheads, compared with 6,450 for the United States and 6,850 for Russia, according to SIPRI. Beijing says it wants a “minimum credible nuclear deterrent” but won’t be the first to use atomic weapons in a conflict.

The Communist Party’s hold on power appears to be secure three decades after it crushed pro-democracy protests centered on Tiananmen Square in 1989.

Beijing is trying to shore up cooling economic growth and prevent politically dangerous job losses amid a tariff war with Washington over trade and technology that has battered Chinese exporters.

China’s Communists are closing in on the 74-year record of the former Soviet Communist Party as the longest-ruling Marxist-Leninist party.

The party’s tumultuous history is marked by disasters including the 1958-61 Great Leap Forward, a failed attempt at rapid industrialization that led to famine that killed at least 30 million people, as well as market-style economic reform in the 1980s that allowed millions of Chinese to lift themselves out of poverty. 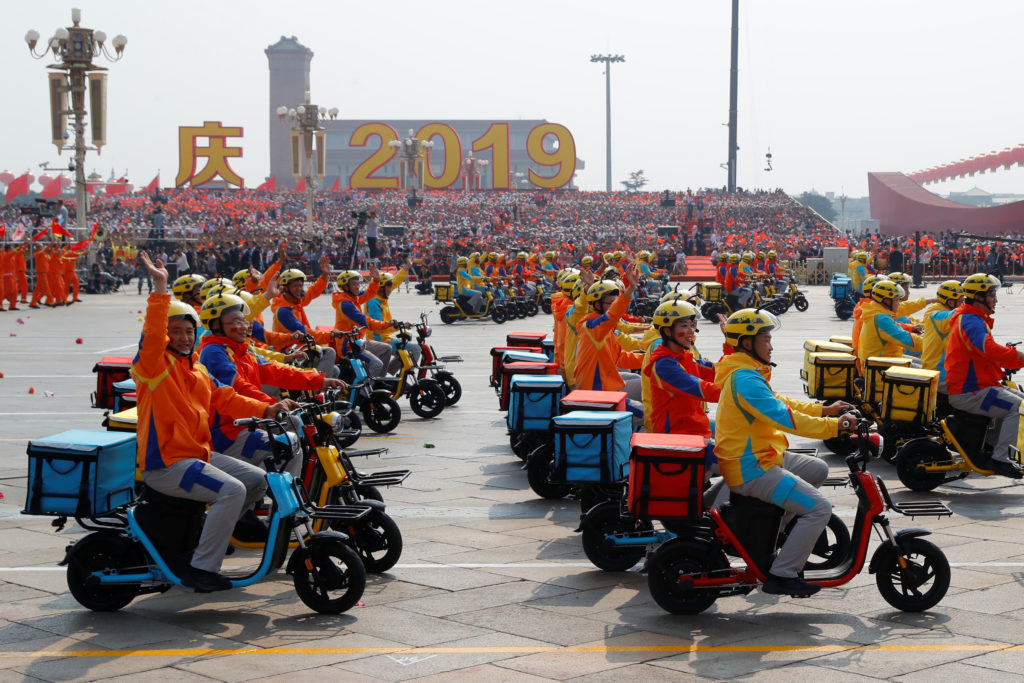 Xi’s government has tightened political control and cracked down on human rights and pro-democracy activism. Beijing faces criticism over its treatment of Muslims in China’s northwest, where the U.S. government, activists and researchers say as many as 1 million people have been detained.

Xi, the son of a commander in Mao’s guerrilla army, has emerged as China’s most powerful leader in decades. The party removed limits on his term as president last year, rolling back efforts to create a consensus-based system and limit the power of individual leaders.

In a speech Monday, Xi reminded Taiwan, which Beijing claims as its own territory, of the ruling party’s pledge to unite the self-ruled island with the mainland, by force if necessary.

Left: The number "70" formed by fireworks is seen in the sky over Tiananmen Square during the evening gala marking the 70th founding anniversary of People's Republic of China, on its National Day in Beijing, China October 1, 2019. Photo via Reuters