Hong Kong protesters crowd one of the world’s busiest airports

HONG KONG (AP) — Protesters crowded into one of the world’s busiest airports, greeting international visitors to Hong Kong with anti-government chants Friday in an effort to raise awareness of their pro-democracy movement.

More than 1,000 demonstrators dressed in black filled the arrival hall at Hong Kong International Airport, chanting, “There are no riots, there’s only tyranny!”

For several weeks, Hong Kong residents have been protesting for democratic reforms and the withdrawal of an extradition bill that has now been suspended. Their demands include direct elections, the dissolution of the current legislature, and an investigation into alleged police brutality.

Andy Ho, one of the protest’s organizers, said its main goal “is to let more people around the world know what is actually happening in Hong Kong in recent months.”

About two hours after the event started, protesters had filled up arrival hall A in Terminal 1 and were spreading out to arrival hall B.

Ahead of Friday’s action, protesters released a tongue-in-cheek video in the style of an airplane landing announcement.

“Ladies and gentlemen, welcome to Hong Kong,” the polished voiceover says. “It is a safety requirement that you remain alert and vigilant at all times because the police will no longer answer your calls when you have any needs.” 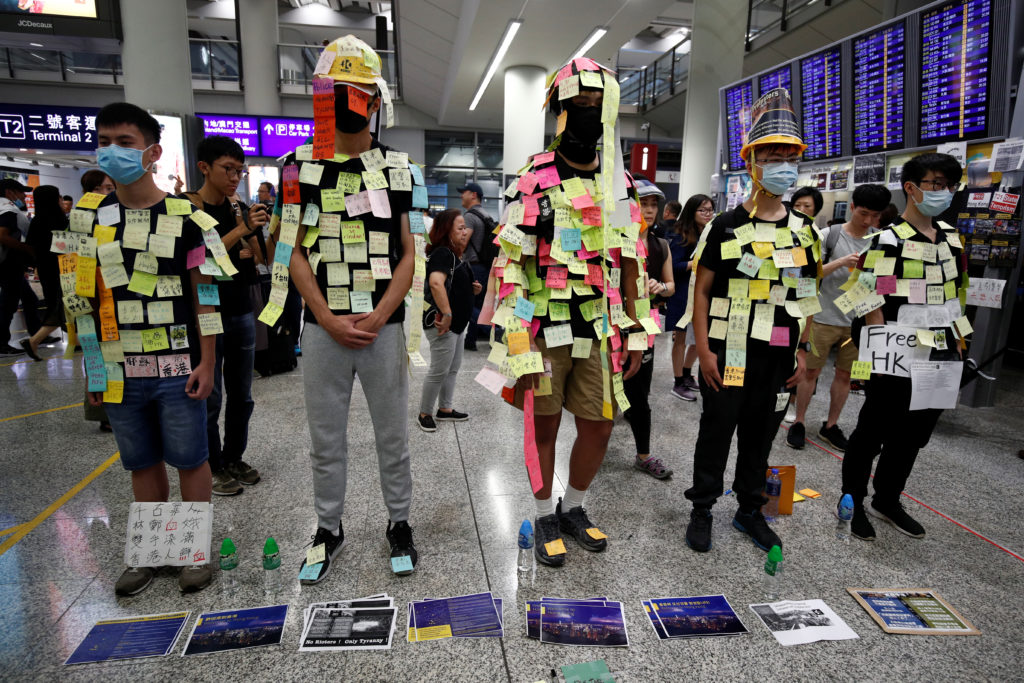 Demonstrators wear post-it notes as part of the “Lennon Wall” movement during a protest against the recent violence in Yuen Long, at Hong Kong airport, on July 26, 2019. Photo by Edgar Su/Reuters

After nearly two months of large-scale protests on streets and around government buildings, clashes with police and other parties have become increasingly violent.

Another march is planned for Saturday in Yuen Long, the neighborhood where a mob of white-clad men brutally attacked people at a rail station last Sunday following a large pro-democracy rally. Dozens were injured and six arrested, with police alleging some had gang ties.

Police have refused to permit the Saturday march, citing the risk of confrontations, but protesters say they will move forward anyway. They have created posters advertising the rally as a nondenominational gathering to mourn Li Peng, a former Chinese premier who died this week. Under Hong Kong’s Public Order Ordinance, religious gatherings and funerals do not require police permission.

Last Sunday, after a large but mostly calm march, some protesters vandalized the Liaison Office, which represents China’s Communist Party-ruled central government in Hong Kong. They spray-painted the office’s surveillance cameras and threw eggs and black paint at the Chinese national emblem on the building. That last move incensed mainland authorities who called it an affront to the “one country, two systems” framework through which the Chinese territory is promised certain freedoms not afforded in the mainland.

Some protesters called on foreign consulates to issue a travel warning for the city after the Yuen Long attacks.

“I advise those who invite a wolf into the room to learn from history,” she said at a regular briefing Friday. “Has anyone in history met a good end after colluding with external forces and blaming their own country and people?”

Hua also addressed concerns that China’s People’s Liberation Army will get involved. A Defense Ministry official this week cited an article in Hong Kong’s Garrison Law which allows army troops stationed in the city to help with public order maintenance at the Hong Kong government’s request.

The army troops based in Hong Kong have become essential to “Hong Kong’s long-term prosperity and stability,” she said.

Left: Demonstrators sit at the arrival hall during a protest against the recent violence in Yuen Long, at Hong Kong airport, China on July 26, 2019. Photo by Edgar Su/Reuters