HONG KONG — Protesters and authorities clashed in Hong Kong again on Saturday, as demonstrators removed a Chinese national flag from its pole and flung it into the city’s iconic Victoria Harbour and police fired tear gas after some protesters vandalized a police station.

The scene was all too familiar in the semi-autonomous Chinese territory, which has been wracked by pro-democracy protests for nearly two months. Since the rallies began, protesters have vandalized buildings and thrown bricks, while police have fired tear gas and rubber bullets.

On Saturday afternoon, tens of thousands of black-clad protesters filled a major road in a usually bustling market district where shop owners had shuttered their storefronts in anticipation of a prolonged demonstration. They also blocked a tunnel and surrounded police stations where non-emergency services were suspended.

Police had warned earlier in the day that those who continued past the pre-approved protest route would be breaking the law. They called on protesters to stick to designated routes and times after violent clashes marred previous rallies in the summer-long protest movement. Any demonstrations that are not pre-approved will be “cleared out” as unlawful assemblies, police said. 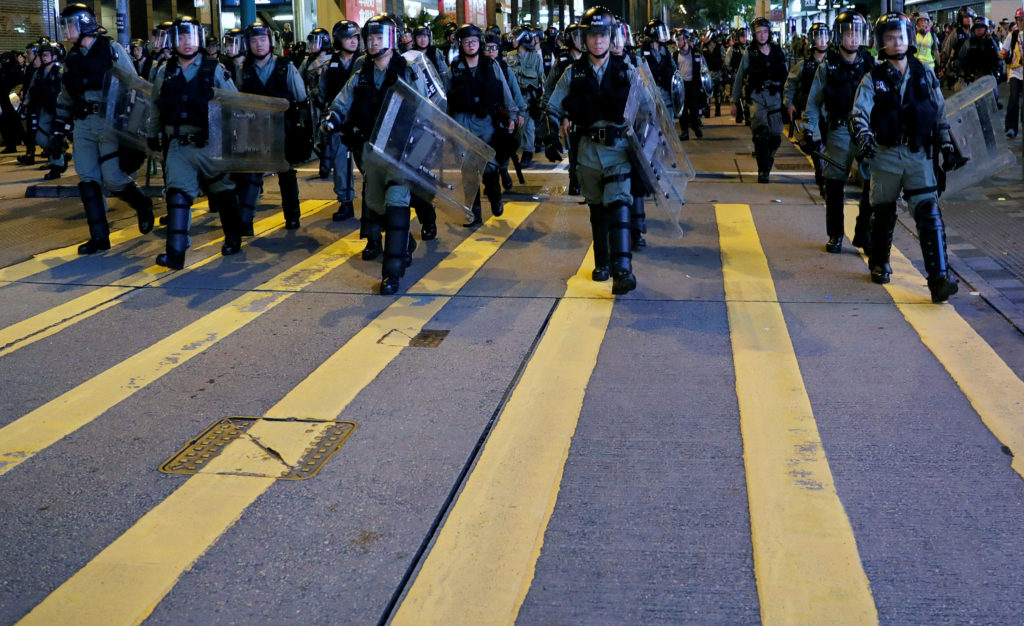 After the protesters defied those warnings, police fired several rounds of tear gas Saturday night to push back some demonstrators who had thrown bricks at a police station and spray-painted inflammatory language on its outer walls.

Protesters then created a barricade with umbrellas, metal road barriers and a public trash receptacle as police protected by shields stayed put and raised tear gas warning banners. The protesters also set cardboard on fire to form a barrier.

A small crowd of local residents gathered in front of the police line, complaining that they were unable to go home because the police were blocking the way to the subway station.

A 42-year-old Swedish man named Peter, who was in Hong Kong on business, said he could not reach his hotel just a few blocks away. “But it’s a small price to pay,” said Peter, who added that he supports the protesters.

In a separate demonstration on Saturday, thousands of people dressed in white gathered at a Hong Kong park to express their support for the police. They held up signs that read “Give Peace a Chance.”

Pro-democracy demonstrators began setting up first aid stations and handing out helmets a few hours into their rally. When one group reached the harbor near a luxury shopping center and high-end hotels, some protesters climbed up a cluster of flag poles and removed the Chinese national flag. 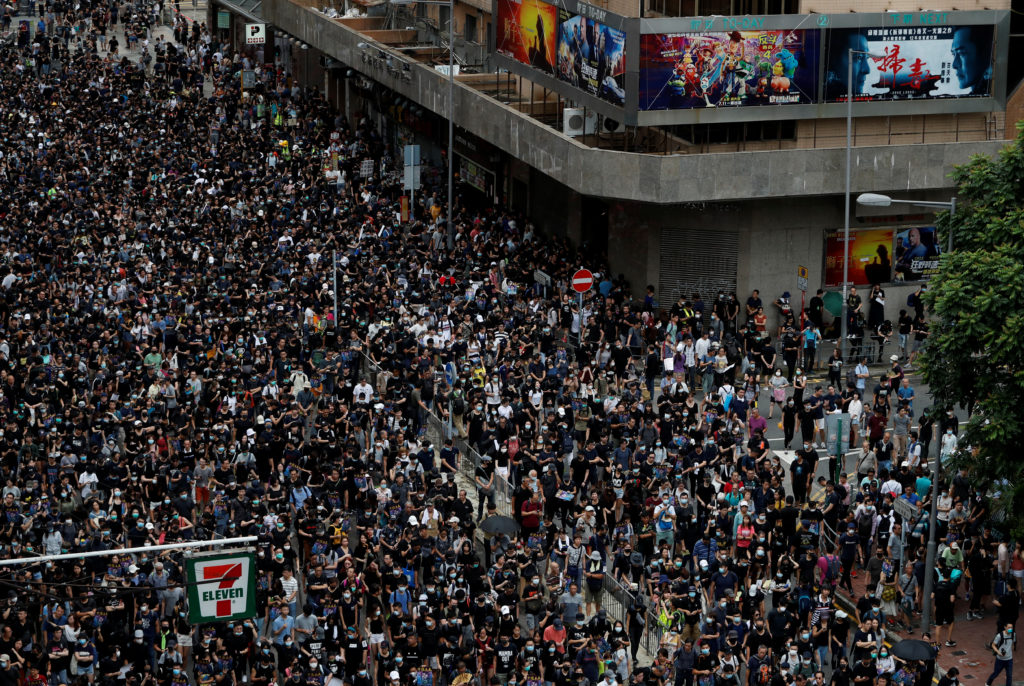 After some debate over whether to paint the flag black, they decided to throw it into the water before the police could intervene.

Shortly afterward, a 38-year-old protester named Paladin Cheng planted himself beside the poles with his own set of flags, which read “Hong Kong Independence.”

“We’re losing our freedom little by little,” said Cheng, who was clad in head-to-toe black with a black visor and face mask. “Those who don’t support Hong Kong independence will have no choice but to become Chinese.”

A former British colony, Hong Kong was returned to China in 1997 under the framework of “one country, two systems,” which promises the city certain freedoms not afforded to mainland residents. In recent years, however, some Hong Kong residents have accused Beijing of chipping away at their autonomy through the arrests of booksellers and activists.

Such sentiments have propelled the current mass demonstrations, which were triggered in early June by a proposed extradition law that would have allowed Hong Kong residents to be sent to mainland China to stand trial.

While the government has since suspended the legislation, protesters have pressed on with five major demands, including direct elections and an investigation into alleged police brutality. Hong Kong’s leader is chosen by a pro-Beijing committee.

Zarine Chau, a 56-year-old security guard, said she rarely used to get involved in politics, but was angered after she saw videos of police officers beating up protesters.

“I feel so hurt,” Chau said. “Why doesn’t the government answer to us?” She attended Saturday’s rally with her 5-month-old Chihuahua, who was there to help protesters relax, Chau said.

A 44-year-old nonprofit worker surnamed Wai said he was worried about protesters’ safety because violent incidents have often occurred after marches draw to a close.

“Some things have gone too far,” Wai said. “Hong Kong’s future belongs to all of us. We need to keep it safe.”

Hong Kong residents have accused police of negligence after 44 people were injured last month in a mob attack by white-clad assailants who appeared to target protesters. Authorities said their resources were stretched due to the prolonged demonstrations.

Mong Kok, the site of Saturday’s pro-democracy protest, was one area where protesters set up a pro-democracy demonstration zone in 2014. Near the end of the Occupy Central protests, police officers descended on the site and tore down the metal barricades, bamboo and wooden planks protesters had used to block off key streets.