How climate change is driving emigration from Central America

Clouds of dust rose behind the wheels of the pickup truck as we hurtled over the back road in Palo Verde, El Salvador. When we got to the stone-paved part of the road, the driver slowed as the truck heaved up and down with the uneven terrain. Riding in the back bed of the truck, Ruben (not his real name) and I talked while we held on tight, sitting on sacks of dried beans that he was taking to market.

“It doesn’t come out right,” he said, “it just doesn’t pay anymore to work the land. I take out a loan for seed, and then I can’t count on making it back to pay off my debt.”

Ruben told me then, for the first time, that he planned to save up his money to migrate out of El Salvador. His story is playing out across Central America among many migrants and would-be migrants.

When I spoke with Ruben, it was 2017, nearly 20 years after I had first spent time in his community, a coffee cooperative in El Salvador’s central highlands founded in the 1990s. Over those two decades, the cooperative’s hopes and dreams of a sustainable livelihood producing coffee for a global market have been dashed.

Rising global temperatures, the spread of crop disease and extreme weather events have made coffee harvests unreliable in places like El Salvador. On top of that, market prices are unpredictable.

These trends have led experts at the World Bank to claim that around 2 million people are likely to be displaced from Central America by the year 2050 due to factors related to climate change.

In the back of the pickup truck that day, we talked about gangs too. There was increasing criminal activity in the town nearby, and some young people in the town were being harassed and recruited. But this was a relatively new issue for the community, layered on top of the persistent problem of the ecological crisis.

As a cultural anthropologist who studies factors of displacement in El Salvador, I see how Ruben’s situation is reflective of a much broader global phenomenon of people leaving their homes, directly or indirectly due to climate change and the degradation of their local ecosystem. And as environmental conditions are projected to get worse under current trends, this raises unresolved legal questions on the status and security of people like Ruben and his family. 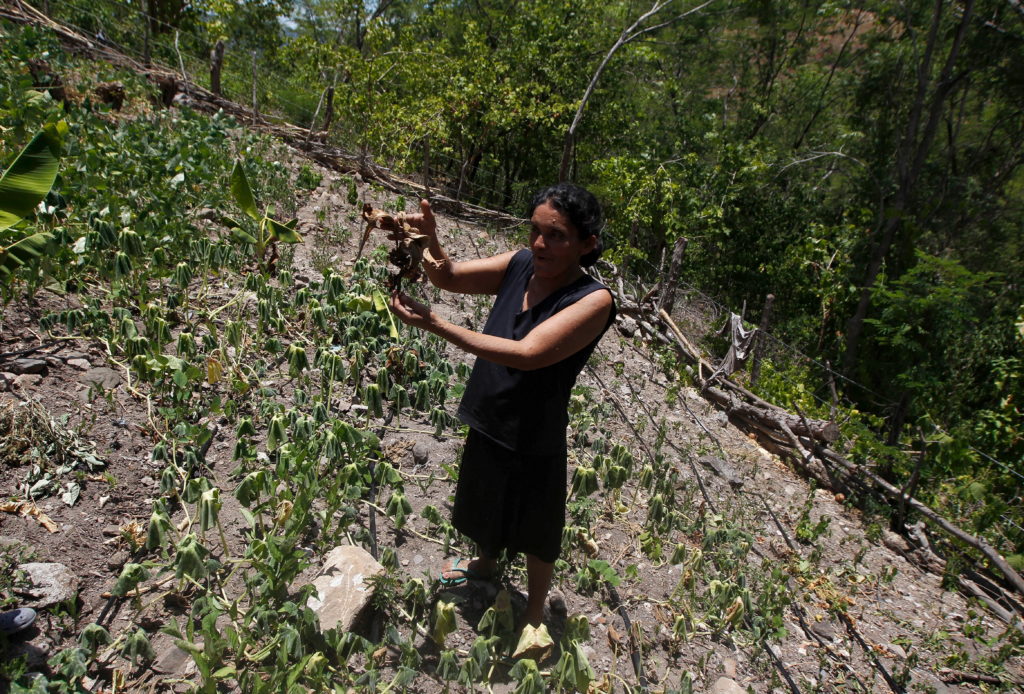 A woman shows a dry radish plant at her drought-affected plot, in the southern village of San Francisco de Coray, in the department of Valle, Honduras, August 13, 2015. Photo by Jorge Cabrera/Reuters

Migration from Central America has gotten a lot of attention these days, including the famous migrant caravans. But much of it focuses on the way migrants from this region – especially El Salvador, Guatemala, Nicaragua and Honduras – are driven out by gang violence, corruption and political upheaval.

These factors are important and require a response from the international community. But displacement driven by climate change is significant too.

The link between environmental instability and emigration from the region became apparent in the late 1990s and early 2000s. Earthquakes and hurricanes, especially Hurricane Mitch in 1998 and its aftermath, were ravaging parts of Honduras, Nicaragua and El Salvador.

Many people from El Salvador and Honduras lived in the U.S. at the time, and the Bush administration granted them Temporary Protected Status. In this way, the government of the United States recognized the inhumanity of sending people back to places struggling with ecological disaster.

In the years since those events, both rapid-onset and long-term environmental crises continue to displace people from their homes worldwide. Studies show that displacement often happens indirectly through the impact of climate change on agricultural livelihoods, with some areas pressured more than others. But some are more dramatic: Both Honduras and Nicaragua are among the top 10 countries most impacted by extreme weather events between 1998 and 2017.

Since 2014, a serious drought has decimated crops in Central America’s so-called dry corridor along the Pacific Coast. By impacting smallholder farmers in El Salvador, Guatemala and Honduras, this drought helps to drive higher levels of migration from the region.

Coffee production, a critical support for these countries’ economies, is especially vulnerable and sensitive to weather variations. A recent outbreak of coffee leaf rust in the region was likely exacerbated by climate change.

The fallout from that plague combines with the recent collapse in global coffee prices to spur desperate farmers to give up. 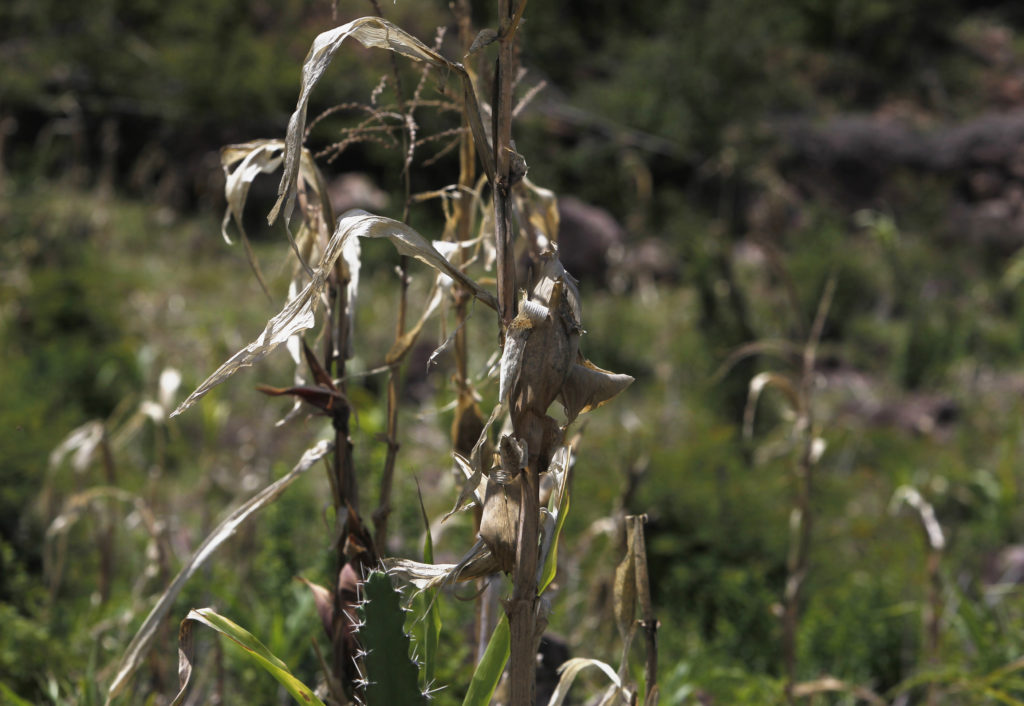 A drought-stricken corn stalk is seen in the village of Orocuina, August 28, 2014. A severe drought has ravaged crops in Central America and as many as 2.81 million people are struggling to feed themselves, the United Nations World Food Programme (WFP) said. The drought has been particularly hard on the so-called “dry corridor” of Central America, which includes southern Guatemala, northern Honduras and western El Salvador. Photo by Jorge Cabrera/Reuters

These trends have led experts at the World Bank to claim that around 2 million people are likely to be displaced from Central America by the year 2050 due to factors related to climate change. Of course, it’s hard to tease out the “push factor” of climate change from all of the other reasons that people need to leave. And unfortunately, these phenomena interact and tend to exacerbate each other.

Scholars are working hard to assess the scale of the problem and study ways people can adapt. But the problem is challenging. The number of displaced could be even higher – up to almost 4 million – if regional development does not shift to more climate-friendly and inclusive models of agriculture.

People who emigrate from Central America may not always fully realize the role climate change plays in their movement, or think of it as the final trigger given all the other reasons they have to flee. But they know that the crops fail too often, and it’s harder to get clean water than it used to be.

Ruben recently contacted me to ask for a reference to a good immigration lawyer. He and his daughter are now in the United States and have an upcoming hearing to determine their status.

Just as he predicted a few years ago, Ruben couldn’t make a living in El Salvador. But he may find it hard to live in the U.S. too, given the mismatch between refugee law and current factors causing displacement.

For several years now, scholars and legal advocates have been asking how to respond to people displaced by environmental conditions. Do existing models of humanitarian response and resettlement work for this new population? Could such persons be recognized as in need of protection under international law, similar to political refugees?

Among the most complicated political questions is who should step up to deal with the harms of climate change, considering that wealthier countries pollute more but are often shielded from the worst effects. How can responsibility be assigned, and more importantly, what is to be done?

In the absence of coordinated action on the part of the global community to mitigate ecological instability and recognize the plight of displaced people, there’s a risk of what some have called “climate apartheid.” In this scenario – climate change combined with closed borders and few migration pathways – millions of people would be forced to choose between increasingly insecure livelihoods and the perils of unauthorized migration.

Miranda Cady Hallett is an associate professor of cultural anthropology and a Human Rights Center research fellow at the University of Dayton. This article was originally published on The Conversation. Read the original article.