The Trump administration’s quiet decision this week to roll back part of an Obama-era transparency rule that mandated reporting of civilian casualties from airstrikes has renewed the stark debate over who dies, and how, in U.S. military action abroad.

Many current and former national security officials have defended the move, calling the 2016 executive order onerous and redundant.A spokesman from the National Security council said on Wednesday that the decision eliminates “superfluous reporting requirements that do not improve government transparency, but rather distract our intelligence professionals from their primary mission.”

But the move alarmed former intelligence officials and experts who argue that the key abilities to oversee an important piece of U.S. military and covert action abroad will now be left in the dark, now that non-military agencies, notably the CIA, will no longer be required to publicly report on casualties resulting from drone strikes and other covert operations. The decision could “remove the lens into the most opaque of all of U.S. airstrikes,” said Marc Garlasco, a former UN war crimes investigator.

President Barack Obama greatly expanded the United States’ targeted killing program, using new technologies to carry out what were often deadly covert operations. During his presidency, by one count from the Council on Foreign Relations, Obama authorized 540 drone strikes that killed hundreds of civilians across Pakistan, Somalia, and Yemen, among other countries. While he expanded drone use, Obama, who was heavily criticized for the policy, also signed the 2016 executive order on civilian casualties to make drone strikes more transparent.

The order was written to address a need “to understand how the U.S. deals with the risk of civilian casualties,” said Larry Lewis, who worked on the order under former President Barack Obama and is now the research director at the Center for Naval Analyses. The executive order was also designed to respond to a “call for greater transparency from the civilian toll” of U.S. counterterrorism operations, Lewis added.

The executive order was an unprecedented step towards boosting transparency around secret operations, and set a new standard for U.S. allies as well, Garlasco said. “What we’re losing in this is leadership,” he said of the Trump administration’s decision, noting that other countries will no longer look to the U.S. as a leader on the issue.

The move has alarmed former intelligence officials and experts who argue the U.S. will lose oversight over an important element of action abroad.

Garlasco cited as an example a report put out by the British Royal Air Force this week that cited only one civilian casualty killed in Iraq and Syria in the past five years, a number many experts dismissed as implausibly low .

Even critics of the change said they saw some logic in the Trump administration’s decision to repeal the reporting requirement. The 2017 National Defense Authorization Act requires the administration to submit an annual report on civilian casualties to Congress that is, in some ways, more comprehensive than the kind of reporting required by the executive order. The report required by the defense authorization act includes a record of “not only civilian deaths but also civilians wounded,” as well as a breakdown of operations by region, Lewis said.

But Lewis argued there will now be a reporting gap when it comes to non-military operations, including the CIA — and that is what most concerns some analysts and human rights professionals.

Steven Aftergood, a project director with the Federation of American Scientists, a group that analyzes security threats through a scientific lens, said the Trump administration’s decision “lowers the standard of accountability” for the government. This comes at a time when the CIA is looking to carry out more drone strikes in parts of Africa, according to reporting by the New York Times. 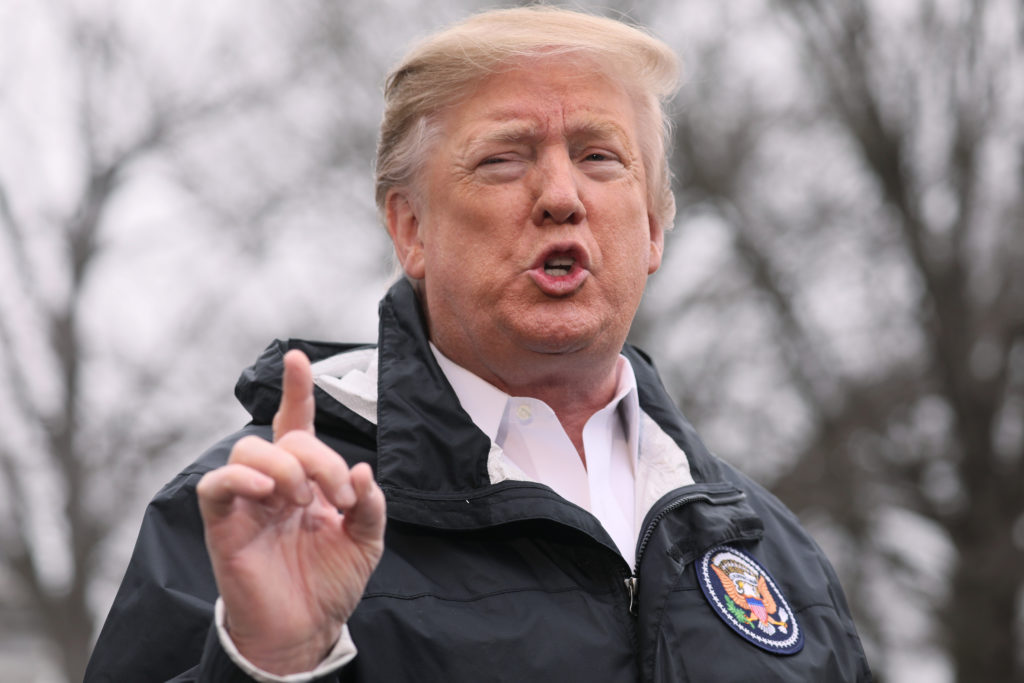 President Donald Trump talks to reporters as he departs to visit storm-hit areas of Alabama from the White House on March 8, 2019. Photo by Jonathan Ernst/Reuters

“No one wants civilian casualties, neither the military nor the CIA,” Aftergood said. “But by reducing access to information about casualties, it makes it harder to hold the government accountable that things go wrong.”

Others said the change is especially worrisome given news reports that the Trump administration lowered an Obama-era threshold in the fall of 2017 for conducting drone strikes in non-combat zones. If that’s true, said Rita Siemion, an international legal counsel for Human Rights First, it would make the reporting requirement on non-military action even more important.

“Now that the rules have been loosened, it’s important that we know the consequences. Without this reporting, it’s really hard to know,” Siemion said.

Covert strikes are “something we should want to know about, particularly when it has to do with killing people in foreign countries that we’re not at war with,” Garlasco added. “When you remove a public reporting requirement, you greatly decrease the likelihood that they’re going to do it.”

What this means for agencies

Even when the entire Obama-era executive order was in effect, the civilian casualty reports released to the public were imperfect. The first report after the order went into force estimated that between 64 and 116 civilians had been killed in airstrikes since 2009 — well below numbers released by organizations such as the New America Foundation and the Bureau of Investigative Journalism, which estimated that more than 250 civilians had been killed by these operations.

“There’s inherent uncertainty,” said Lewis, noting that when buildings are hit, it’s difficult for agencies to estimate how many individual deaths result from these airstrikes.

But while the reports can never give a complete picture of the human toll of U.S. operations abroad, Lewis and others stressed that they can help agencies better assess their strategies and make changes to reduce civilian deaths.

“Even more important than the number is having a serious process that tries to learn the mistakes that have been made,” Lewis said. A major objective of the Obama executive order was to have the government “go back and look at what trends were happening and what problems were being encountered, and try to learn from that,” he said.

A report released in late 2017, which examined English language news reports through November of that year, said there was a 42 percent increase in civilian deaths compared to the same timeframe in 2016. This indicates the government has not made a significant effort to reassess its strategy, Lewis said.

“Without the investigation, accounting, amends, and lessons learned, we will continue to see civilian deaths in these legally gray operations,” Garlasco said.

Left: The Trump administration is facing criticism for rolling back an Obama-era transparency rule for reporting civilian casualties from drone strikes and other covert operations. File photo by REUTERS/Patrick T. Fallon