Named by the U.K. Met Office weather agency, the storm brought massive gusts that hit 93 mph (150 mph) at the northern Welsh village of Aberdaron and 86 mph (138 kph) at the Welsh town of Capel Curig. A British Airways plane is thought to have made the fastest ever flight by a conventional airliner from New York to London.

The fierce winds propelled a Boeing 747-436 to make the 3,500-mile transatlantic journey from New York to London in just 4 hours and 56 minutes, landing 102 minutes early and reaching a top speed of 825 mph (1,327 kph), according to flight tracking website Flightradar24. Two Virgin Airlines flights also roared across the Atlantic, with all three smashing the previous subsonic New York-to-London record of 5 hours and 13 minutes, Flightradar24 reported.

Storm surges ate away at beaches and pounded rock cliffs and cement docks. The Met Office issued 190 emergency flood warnings and urged people not to try to drive through flooded roads. Residents in the town of Appleby-in-Westmorland in northwest England battled to protect their homes amid severe flooding as the River Eden burst its banks.

Three people were injured after a pub roof partially collapsed Saturday evening in the city of Perth in central Scotland.

At least 10 rail companies in Britain sent out “do not travel” warnings, while nearly 20 others told passengers to expect extensive delays. The strong winds damaged electrical wires and littered train tracks with broken tree limbs and other debris, including a family trampoline.

Lufthansa airlines said there would be numerous cancellations and delays beginning Sunday afternoon and running until at least Tuesday morning. The airline plans to keep operating long-haul flights at its main Frankfurt hub. Eurowings, a budget subsidiary of Lufthansa, canceled most flights for the duration of the storm. 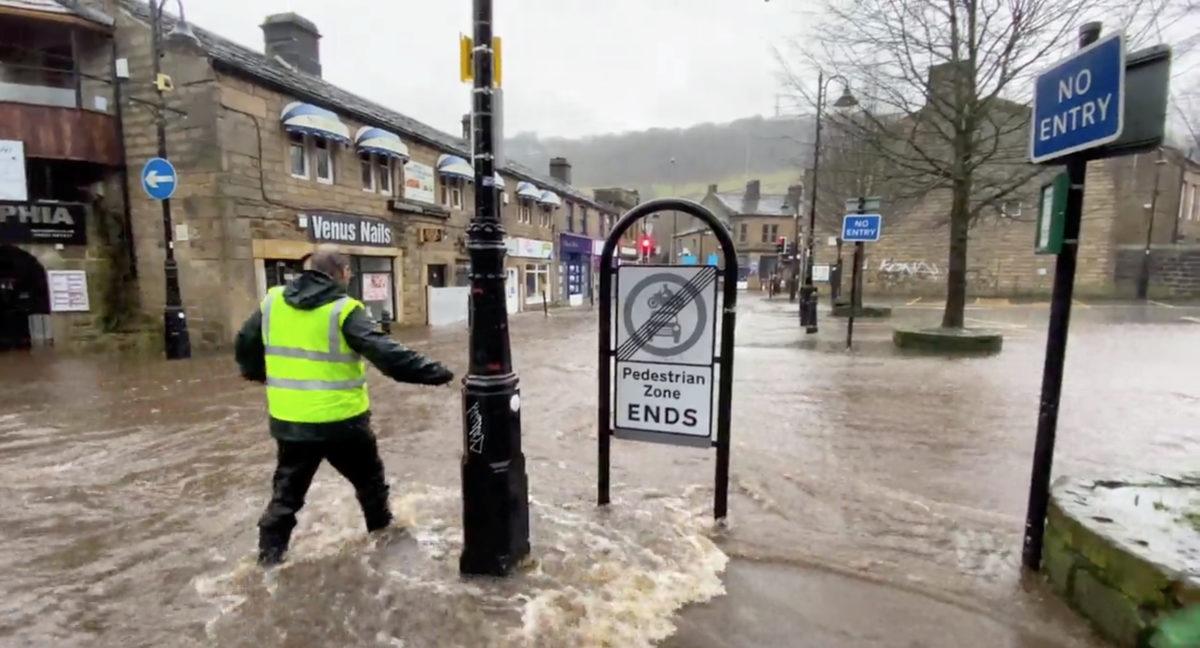 A man wades through a flooded street due to Storm Ciara in Hebden Bridge, West Yorkshire, Britain February 9, 2020 in this still image obtained from social media video. Photo courtesy of The Afghan Rug/via Reuters.

Two huge ports on either side of the English Channel, Dover in England and Calais in France, shut down operations amid high waves. Ferries were canceled across the region, including in the turbulent Irish Sea and North Sea.

The Humber Bridge in northern England also shut down, a move its website said was only the second time the massive bridge had been entirely closed.

Breaking with her usual Sunday routine, Queen Elizabeth II did not attend church in Sandringham due to high winds.

A cow was spotted on a main highway in southern England after high winds blew down fences.

Adding to the weather woes, heavy snow was predicted for Monday in some parts of the U.K.

In Ireland, power was knocked to an estimated 10,000 homes, farms and businesses. National weather agency Met Eireann warned that a combination of high tides, high seas and stormy conditions had created a significant risk of coastal flooding, particularly in the west and northwest.

Fierce winds knocked out electricity in northern France as well. Paris authorities sent out a warning to residents and tourists alike to stay indoors for their own safety. Parks and cemeteries in the city of Lille and nearby towns shut down as strong winds cracked heavy branches. Open-air markets closed early.

Luxembourg and the German city of Cologne announced that all school children could stay home Monday to avoid travelling under dangerous conditions.

In Germany, where the storm is known as “Sabine,” national railway operator Deutsche Bahn canceled long-distance trains to destinations most at risk, including Emden and Norddeich in Germany’s northwestern corner, the northern city of Kiel and the North Sea island of Sylt.

“We have learned from previous storms that it’s better not to have trains travel into critical regions in the first place,” Deutsche Bahn spokesman Achim Stauss said. “What we want to avoid is trains getting stuck between stations.”

Teams of railway employees fanned out with chainsaws to remove any fallen trees blocking the tracks.

In Denmark, meteorologists warned about possible hurricane-force winds coming late Sunday, and flights were canceled out of Copenhagen. Danish authorities warned motorists not to cross large bridges, including the Great Belt Bridge that links eastern and western parts of Denmark.

The storm was also expected to smash into southern Norway’s coast and hit southern and western parts of Sweden.

In the world of sports, dozens of soccer games, horse races, rugby matches and other events were called off, including the Premier League match between Manchester City and West Ham. A 10-K run in London that was expected to draw 25,000 participants was also canceled.

The Dutch football association called off all matches Sunday in the top-flight league due to safety concerns, as did Belgium’s top two soccer leagues, the Jupiler Pro League and Proximus League. A German soccer league match between title challenger Borussia Moenchengladbach and Cologne was also put off.

Yet in the Netherlands, an intrepid band of cyclists made the most of the wild conditions to take part in the Dutch Headwind Cycling Championships.

Using only basic bikes without gears, lightweight frames or drop handlebars, contestants rode a timed 8.5-kilometer (5.3-mile) course along the coast of southern Zeeland province. Blasted by winds, blinded by blowing sand from nearby beaches, the cyclists struggled to stay upright.

“I survived, but it’s very tough,” said Hans Deting, 56, his right hand dripping with blood after being blown off his bike.

“This is a bucket list thing,” rider Edwin van Gaalen explained, as he leaned on his handlebars, gasping for breath after finishing.

Ultimately, the gale-force winds became too strong even for this macho event. Organizers brought the race to an early end after 250 of the 300 riders had finished.

Angela Charlton in Paris, Geir Moulson in Berlin and Mike Corder in Neeltjejans, the Netherlands, contributed.