Rawan Taha is having a horrible few weeks.

This month, before her preschool students filed into the room at the daycare and education center in Beirut where she works, Taha spotted a white piece of paper on her desk. It was a letter from the school principal informing her and the entire teaching staff that their December pay might be slashed by half.

“Let’s hope January will be better in order to prevent me from taking other measures,” the letter read.

Taha was devastated, but not surprised.

In recent weeks, Taha’s friends have received similarly bad news–a sudden pay cut or no pay at all.

In early November, Taha was told she would no longer be paid in U.S. dollars. Her paycheck is now paid out in Lebanese pound— a currency with a value that dropped by 40 percent in a one week span. 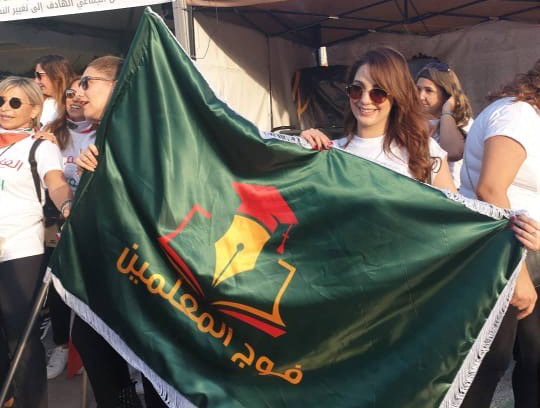 Thirty-one-year-old Rawan Taha, who works as a preschool teacher, said people in Lebanon are protesting because they have “nothing to lose.” Photo courtesy of Rawan Taha

It’s been over a month since massive protests broke out across Lebanon set off by a tax on WhatsApp calls and fueled by public discontent towards the Lebanese government which they blame for the country’s economic instability.

The unrest has shuttered schools, banks and businesses. With limited employment options available, Taha and her colleagues feel forced to endure these measures. “We don’t have any alternative,” she said, “No one is hiring so we all have to just give in.”

The protests are a result of long simmering economic anxieties from a citizenry that feels financially squeezed at every turn.

A huge swath of Lebanese households are grappling with a crippling combination of high living costs, low wages and a government so financially indebted it can’t provide reliable public services. In a country where the minimum wage is $400 per month, baseline living costs have creeped up to levels that rival New York City, which has a monthly minimum wage that is six times higher.

In Beirut electricity is the great equalizer.

From the Prada store on the Corniche, Beirut’s seaside promenade, to the cinderblock homes of the Shatila refugee camp–the country’s electrical grid fails them all.

Lebanon has not had the capacity to supply 24-hour electricity since the 1975 civil war. The bloody sectarian power struggle lasted 15 years and leveled much of the country’s infrastructure to rubble. Today, Beirut residents get only 21 hours of electricity a day.

According to a 2019 World Bank report, most households and more than 84 percent of businesses say they pay for a private generator to supply almost half of their electrical needs.

The result is a doubling of the average household’s electricity bill.

“I pay the state electricity, I pay for my private generator, and I pay a bill for the community generator,” he said.

In total Ayash pays about $300 a month for electricity. 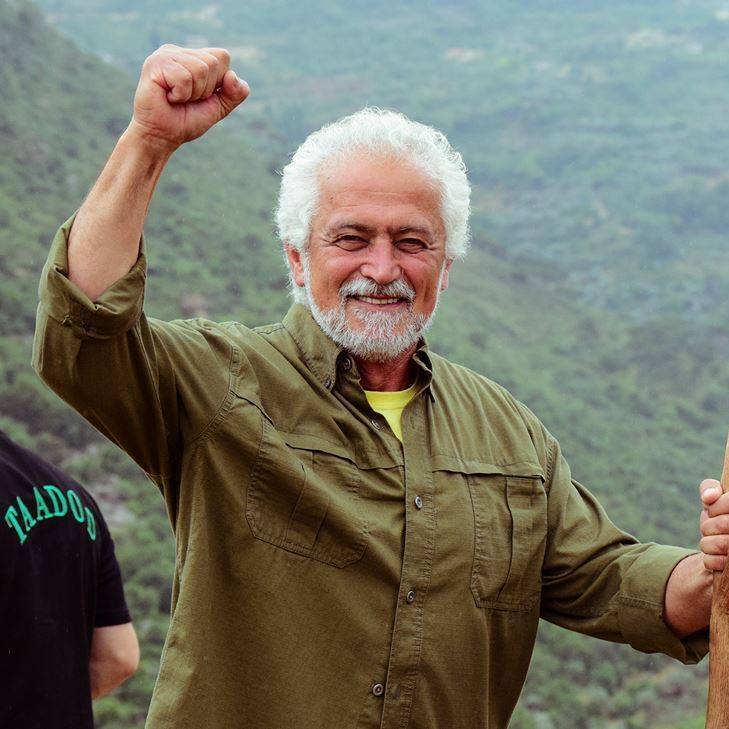 Ajwad Ayash led a community revolt against the Naameh landfill in 2015. Of the 2019 protests, he said: “This is a revolution against all kinds of garbage— political garbage and actual waste.” Photo courtesy of Ajwad Ayash

Ayash, who is in his 70s, moved back to Lebanon with his family in 2008 after living in the U.S. for 25 years. Though he is an engineer by training, he is known in Naameh as an activist who led a community revolt against a massive landfill in town.

In 2015, after years of complaints that the landfill was making them sick, Ayash and other villagers physically blocked garbage trucks from entering the Naameh landfill– the main dumping site for Beirut’s garbage.

Mounds of trash bags began to fill the streets of Beirut. The whole ordeal grew into a national spectacle. Ultimately, it served as a glaring example of the government’s inability to fulfill its basic function.

Ayash said the protests playing out across Lebanon today are an extension of the 2015 “garbage protests,” as they’ve come to be called.

“What is happening right now is a reflection of the ‘Revolution on Garbage’ as I called it back then. This is a revolution against all kinds of garbage— political garbage and actual waste,” he said.

“How can we go that far knowing that corruption is everywhere?” he said.

Ayash makes a good living running his own engineering company where he maintains a core of longtime clients, but even he is feeling the squeeze.

“We get the minimum amount of electricity. We have three cars at home but only use one,” he said. “We have a water reservoir to collect rainwater so we don’t have to buy it, and we try to stay home and not travel.”

The relative costs of electricity also increases the farther from Beirut a person lives.

For those living in south Lebanon for example, electricity costs alone eat up 12 percent of residents’ income, even though they only get 15 hours of electricity a day.

The cost of connectivity

It is perhaps fitting that the protests initially began around a tax on WhatsApp.

The country’s telecom industry is infamous for its expensive–and what many residents consider nonsensical–pricing practices. Lebanon’s two main phone companies Alfa and Touch are both state run, so there is little competition.

Ali Harb is a business professor at the American University of Culture and Education in Bint Jebail, Lebanon. He said his cell phone bill alone comes out to $135 a month. This gets him 2,000 minutes and 100 text messages per month.

Since Alfa and Touch do not offer family plans, Harb’s wife, teenage daughter and mother-in-law all have their own individual cell phone bills.

But these prepaid cards have a 30 day expiration date, meaning whatever is not used within 30 days from purchase, disappears.

According to the Lebanon based digital rights group SMEX, in 2015 both Alfa and Touch added a ringtone charge to customers’ bills without their consent.

When customers inquired about the new charge, the company required them to pay an opt-out fee to get it taken off their bill. The companies later eliminated the fee after SMEX waged a campaign against the practice.

In addition to the rising cost of mobile communication, there is the cost and quality of Lebanon’s internet.

Ookla, a U.S. based internet analytics company –ranks Lebanon 164th in the world when it comes to their broadband download speed. This ranks below Syria, Ethiopia and Somalia.

Soon his daughter will graduate from high school. One college on her wish list is the American University of Beirut, which averages around $20,000 a year, including living costs.

With no robust government-subsidized student aid or loan program, that cost will fall on Harb’s shoulders.

“I try not to think about it.” he said with a chuckle.

“I cannot support myself”

Taha, 31, knows she is lucky to have a job but says she simply does not make enough money to live on her own.

Taha has worked as a preschool teacher at a private school for two years. Her salary is $900 a month.

From that, Taha says she spends $265 on her car payment and $130 on her cell phone bill. She uses the rest to pay for food and gas, but does not leave enough for her to move out of her parent’s home.

“I cannot support myself to eat, to go out, to do anything if I don’t live with my parents. We all help each other and that’s the case for most Lebanese people,” she said.

The unemployment rate for people Taha’s age– under 35– is nearly 40 percent.

Though an expensive college degree helps, there are simply not enough good jobs to go around.

Every year, an average of around 20,000 individuals enter the Lebanese workforce, not taking into account the huge influx of Syrian refugees.To absorb them, the economy would need to create more than six times the number of jobs it currently has to offer.

This is where the private sector could play a critical role, but in Lebanon, market analysts with the World Bank found that private sector job creation remains weak because investors are scared off by poor governance and the country’s weak infrastructure.

It is estimated that up to 44 percent of Lebanon’s college educated population has migrated abroad.

Many young people see leaving the country as the only way to forge their financial future.

But it’s now harder to emigrate than it once was.

The fall of oil prices has slowed hiring in the Gulf, and more restrictive immigration policies in the U.S and Europe has meant that some young people no longer have the possibility of leaving.

“Now young people realize there is no more emigration,” Ayash said, “So they are saying, ‘Why can’t we do something about our own country to make living possible here?’

For many Lebanese families, the math does not add up–household bills far outweigh income.

And this is not just in terms of individual households either. The entire country is dangerously in debt. Lebanon’s public debt is now more than 153 percent of GDP–among the highest in the world.

This is where remittances–money sent back from family members who have emigrated abroad–play an integral role.

Lebanon, a small country about the size of Wales, has a larger inflow of remittances than any other country of similar size with one in four Lebanese emigrants in the global diaspora, remitting regularly.

The data suggests that the households receiving these remittances rely on it for more than just extra pocket money.

About 39 percent of these households rely on remittances to finance primary school education; 24 percent rely on them to pay for medication. 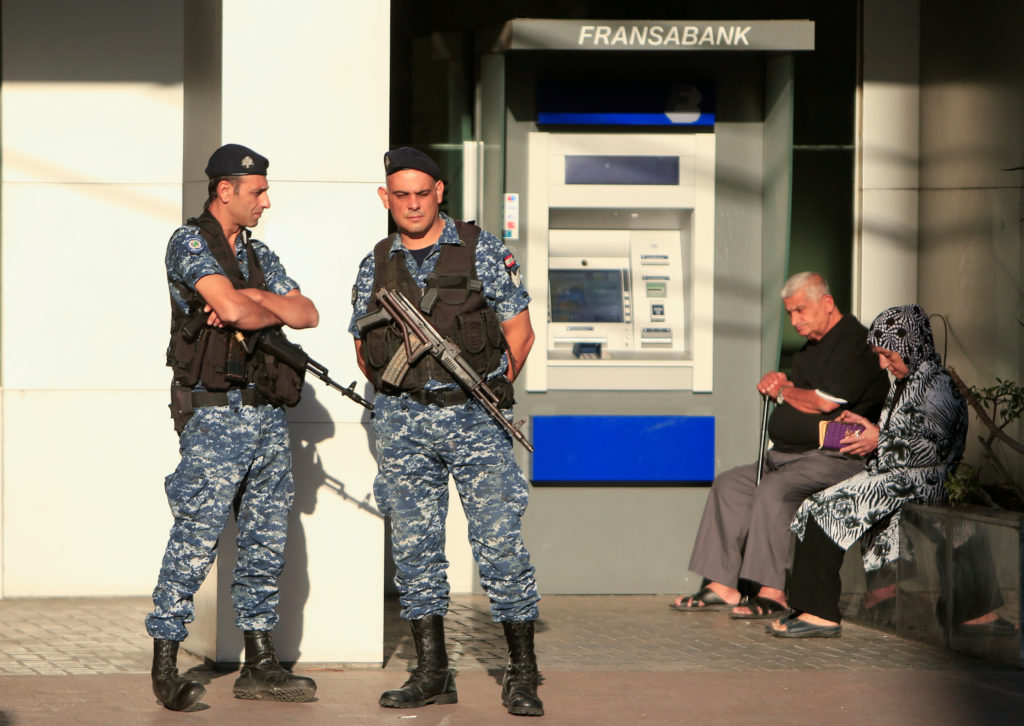 Lebanese police stand outside a Fransabank branch in Sidon, Lebanon on November 19, 2019. With widespread protests, some investors fear a bank run could collapse the country’s banking system. Photo by Ali Hashisho/Reuters

The government itself is also increasingly reliant on the large bank deposits from wealthy investors abroad to bring in a new dollars into the country.

But the demonstrations have rattled some investors who fear a bank run could collapse the country’s entire banking system.

No easy way out

After a month of paralyzing protests, the political crisis is still at an impasse, and the economic crisis is only escalating.

ATMs all over Lebanon are inaccessible.

Bank employees, who are now often tasked with telling people they cannot withdraw their money, have demanded that they be provided with security to protect them from a wall of furious customers.

Protestors have demanded a wholecloth changed in the country’s political leadership but the problem is it is unclear who can–or even wants to–take the reigns from there.

Lebanon’s Prime Minister Saad Hariri resigned nearly a month ago in response to the large-scale anti-government protests but stayed on in a caretaker capacity until the selection of a new prime minister–a post reserved for a Sunni Muslim under Lebanon’s sectarian power-sharing system.

Earlier this month, the business tycoon and former finance minister Mohammed Safadi, who emerged as a Hariri’s possible replacement, was rejected by protestors who viewed him as a member of the ruling elite. He withdrew his candidacy, saying it would be too difficult to form a government.

Taha believes the protests will continue until they get the changes they are demanding.

Left: Protesters gesture towards a driver at a roadblock during ongoing anti-government demonstrations in Beirut, Lebanon November 25, 2019. REUTERS/Andres Martinez Casares