BEIRUT (AP) — Nationwide protests paralyzed Lebanon on Friday as thousands of demonstrators blocked major roads in a second day of rallies against the government’s handling of a severe economic crisis and the country’s political class they perceive as being corrupt.

The protests are the largest Lebanon has seen since 2015 and could further destabilize a country whose economy is already on the verge of collapse and has one of the highest debt loads in the world. The protests, which drew people from all religious and political backgrounds, were largely peaceful, although violence erupted in several areas.

The protests could plunge Lebanon into a political crisis with unpredictable repercussions for the economy, which has been in steady decline for the past few years. Some of the protesters said they would stay in the streets until the government resigns.

Time and again, the protesters shouted “Revolution!” and “The people want to bring down the regime,” echoing a refrain chanted by demonstrators during Arab Spring uprisings that swept the region in 2011. 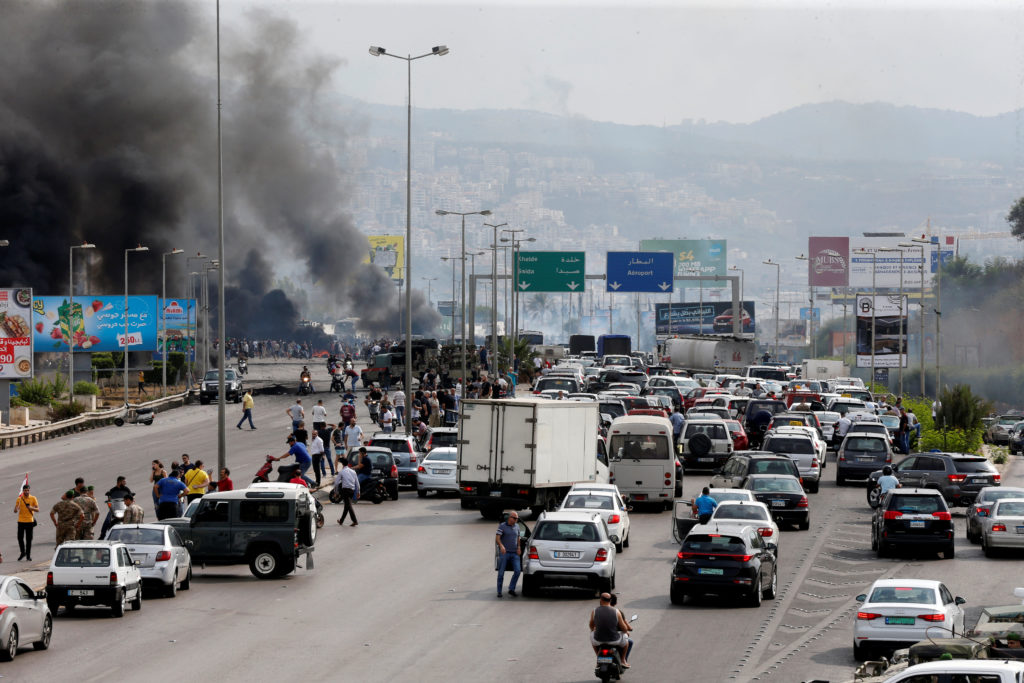 They took aim at every single political leader in the country, including President Michel Aoun and his son in law, Foreign Minister Gebran Bassil, as well as the prime minister and parliament speaker, blaming them for systemic corruption they say has pillaged the country’s resources for decades.

“We are here today to ask for our rights. The country is corrupt, the garbage is all over the streets and we are fed up with all this,” said Loris Obeid, a protester in downtown Beirut.

“There’s no future for us, no jobs at all and this is not acceptable any more.”

Schools, banks and businesses shut down as the protests escalated and widened in scope to reach almost every city and province. Hundreds of people burned tires on highways and intersections in suburbs of the capital, Beirut, and in northern and southern cities, sending up clouds of black smoke in scattered protests.

The road to Beirut’s international airport was blocked by protesters, stranding passengers who in some cases were seen dragging suitcases on foot to reach the airport. Major arteries including the Salim Salam tunnel that connects central Beirut with the airport were blocked with sand dunes.

“We are here for the future of our kids. There’s no future for us, no jobs at all and this is not acceptable any more. We have shut up for a long time and now it is time to talk,” Obeid added.

In the northern city of Tripoli, the bodyguards of a former member of parliament opened fire at protesters who closed the road for his convoy wounding three of them, witnesses said.

The tension has been building for months, as the government searched for new ways to levy taxes to manage the country’s economic crisis and soaring debt.

The trigger, in the end, was the news Thursday that the government was planning, among other measures, to impose a tax on Whatsapp calls — a decision it later withdrew as people began taking to the streets. 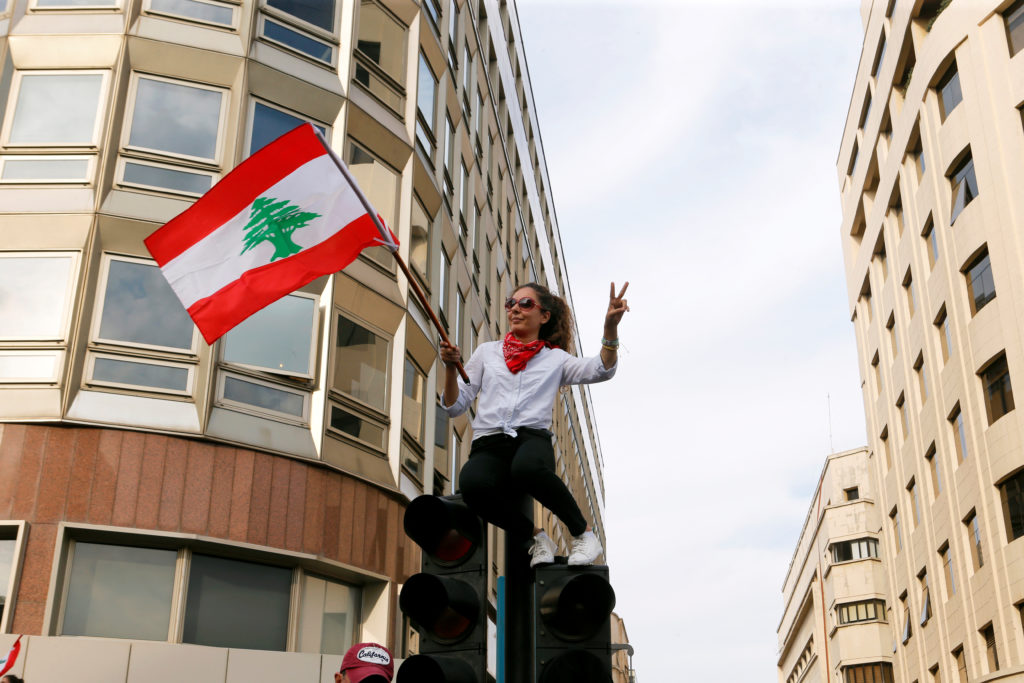 A demonstrator gestures as she holds a Lebanese flag during a protest over deteriorating economic situation, in Beirut, Lebanon October 18, 2019. Photo by Mohamed Azakir/Reuters

In some cases the demonstrations evolved into riots, as protesters set fire to buildings and smashed window fronts, taking their anger out on politicians they accuse of corruption and decades of mismanagement.

Two Syrian workers died Thursday when they were trapped in a shop that was set on fire by rioters. Dozens of people were injured.

Some protesters threw stones, shoes and water bottles at security forces and scuffled with police. Security forces said at least 60 of its members were injured in the clashes. Protesters were also injured.

Prime Minister Saad Hariri canceled a Cabinet meeting scheduled for Friday to resume discussions. He was expected to address the nation later in the day.

Interior Minister Raya al-Hassan insisted Hariri would not resign, saying that could spark a national crisis more dangerous than the current economic crisis.

Years of regional turmoil — worsened by an influx of 1.5 million Syrian refugees since 2011 — are catching up with Lebanon. The small Arab country on the Mediterranean has the third-highest debt level in the world, currently standing at about $86 billion, or 150% of its gross domestic product.

International donors have been demanding that Lebanon implement economic changes in order to get loans and grants pledged at the CEDRE economic conference in Paris in April 2018. International donors pledged $11 billion for Lebanon but they sought to ensure the money is well spent in the corruption-plagued country.

Despite tens of billions of dollars spent since the 15-year civil war ended in 1990, Lebanon still has crumbling infrastructure including daily electricity cuts, trash piles in the streets and often sporadic, limited water supplies from the state-owned water company.

Left: Demonstrators hold Lebanese flags as they gather during a protest over deteriorating economic situation, in Beirut, Lebanon October 18, 2019. Photo by Mohamed Azakir/Reuters

Turkish ambassador to U.S. disputes that Erdogan agreed to a ‘cease-fire’