In Pakistan, abused women find comfort and justice at this all-female-run center

Azra Perveen entered the brightly lit lobby of the Violence Against Women Center in Pakistan’s Punjab province on a late September day, the words “Protect. Serve. Empower.” written on the wall.

Perveen began recounting her story at the front desk, before heading to the center’s counseling department. Then she walked a few feet to the police department, located in same the building, where officers reviewed her case and sent an order to her family members to come to the center at 9 the next morning. 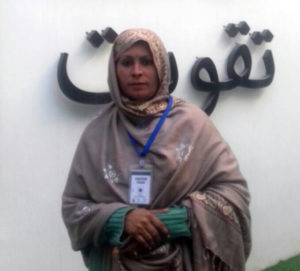 Everywhere Perveen turned, a woman greeted her in this all-in-one center for victims of physical, psychological and economic abuse. They handled her case “with respect, with no distinction in class or income level,” she said in a recent phone interview.

The center, which includes a police station, doctor’s office, court house and counseling, operates 24 hours a day with a staff of 60 women, including an all-female police force. It opened in Punjab, Pakistan’s largest province, in March 2017.

Its founders are members of Punjab’s Strategic Reforms Unit, which was established in 2014 to address the needs of female victims of violence and other aspects of women’s rights. The comprehensive design of the center is the first of its kind in the region, they said. 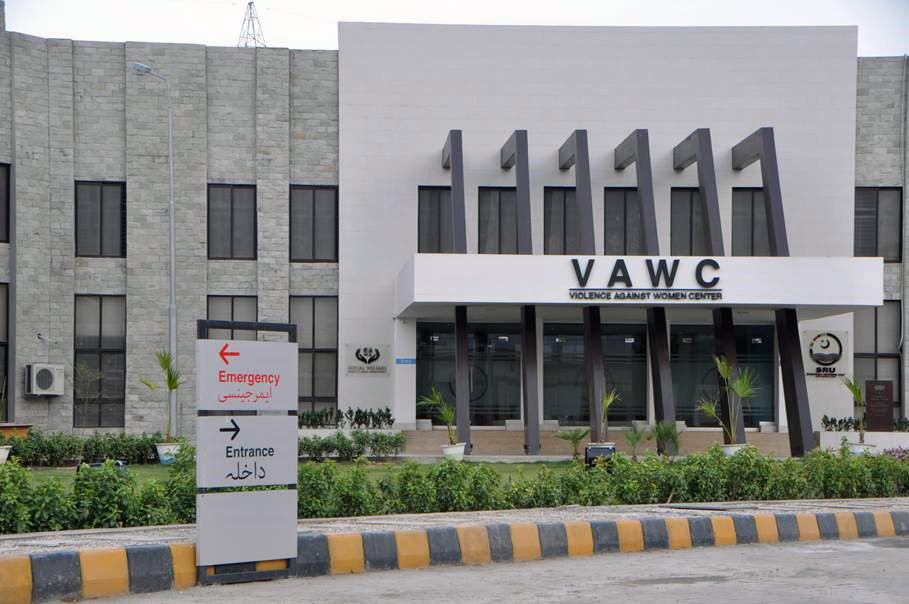 The abuse started, Perveen said, after she married her first husband in 2000. They had two children, who are now 15 and 17. But they got a divorce after 10 years because he and his family were physically and emotionally abusive, she said.

Perveen moved back in with her parents, who expected her to financially support them. When she told them she couldn’t, Parveen said her family members became abusive and denied her ownership of her land. “I felt alone and helpless, like I couldn’t manage myself,” she said.

Accurate figures in general are hard to glean in Pakistan. The Human Rights Commission of Pakistan recorded more than 2,500 cases of violence against women in all of Pakistan in the last year, far lower than those cited in Punjab. The commission gathers its numbers by monitoring 15 newspapers and news websites across Pakistan, so they do not reflect incidents not reported in the press.

Fauzia Viqar, chairwoman of the Punjab Commission on the Status of Women, said she thinks as a result of the center, “women will be emboldened to access their rights and to move away from violent situations,” and therefore, she expects the number of crimes they report to go up.

The Punjab women’s center has processed more than 1,100 cases and resolved 952 since it opened its doors in May. Of those cases, 670 have been handled by the police, 179 through prosecution, 149 through mediation and 193 by the psychology department, which offers post-trauma rehabilitation — something many poorer Pakistanis normally do not have access to in their daily lives, the organizers said. They said a courthouse with a female judge is expected to open later this year. 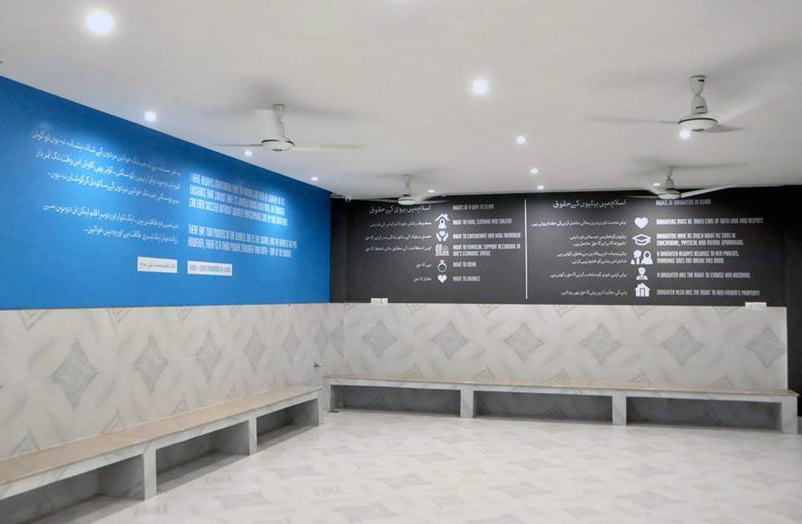 The center’s organizers also expect more convictions for crimes against women in Pakistan with improved evidence collection strategies and more awareness of gender-based issues among the general public.

“Before they used to go to tribal meetings with elders, but there was no record of that meeting and no commitment by the party to hold them accountable,” said Salman Sufi, director general at the Chief Minister’s Strategic Reforms Unit. Women’s complaints at the center are audio-visually recorded and monitored to prevent evidence tampering.

The center is funded entirely by the Punjab government using taxpayer money, an aspect its founders cite to critics who decry the influence of Western countries when they fund local women’s initiatives.

“Why do we relegate women’s rights to the West?” when Pakistan’s constitution delegates equality between men and women, Viqar said.

“It was really the local initiative that made it happen, and that’s why it hasn’t happened anywhere else yet,” said Anita Weiss, a researcher and scholar on women’s rights in Pakistan at the University of Oregon. “When you look at the changes happening in Pakistan you realize these are the demands of Pakistanis themselves.”

As a result of the center, “women will be emboldened to access their rights and to move away from violent situations.”

Sufi said the Strategic Reforms Unit hopes to build 36 more centers across the country, with the next one planned for Lahore.

Jamshed Kazi, head of U.N. Women Pakistan, said he wants to share the center’s model even further — to other countries where U.N. Women operates. “It may sound counter-intuitive (due to the country’s challenges in regards to women’s rights), but let’s look at the Pakistan model in Punjab and share it with others,” he said.

While some advocates point to the progress the country has made over the last 20 years, others point to gender disparities in education, governance and health as indicators that Pakistan still has a long way to go.

In 2016, the Punjab Assembly passed the Protection of Women Against Violence Act, which established three civil remedies, in addition to legal punishments, for victims of violence. They include GPS monitoring of the perpetrator, protection from eviction and compensation for medical treatment or legal fees.

The women’s protection law encountered some pushback from Pakistan’s conservative Council of Islamic Ideology, which called the law “un-Islamic” and said it “was promulgated to accomplish the West’s agenda to destroy the family system in Pakistan.”

Sufi said the Strategic Reforms Unit met with the Council of Islamic Ideology several times and convinced them to support the law using scriptures from the Quran.

Still, Pakistan operates on multiple, sometimes conflicting legal structures and judicial systems. Although the constitution lays down the formal structure and jurisdiction of judicial bodies in the country, a much less formal system comprising tribal ‘jirgas’ continues to play a powerful role through customs and usage.

Jirgas, mostly in tribal areas, operate on their own systems left intact after Pakistan gained independence from the British, said Noreen Naseer, a scholar on women from tribal areas in Pakistan at the University of Peshawar.

“We have laws passed, but the issue is implementation and the patriarchal mindset,” said Mumtaz Mughal, director of the Aurat Foundation, a woman’s rights organization in Pakistan. 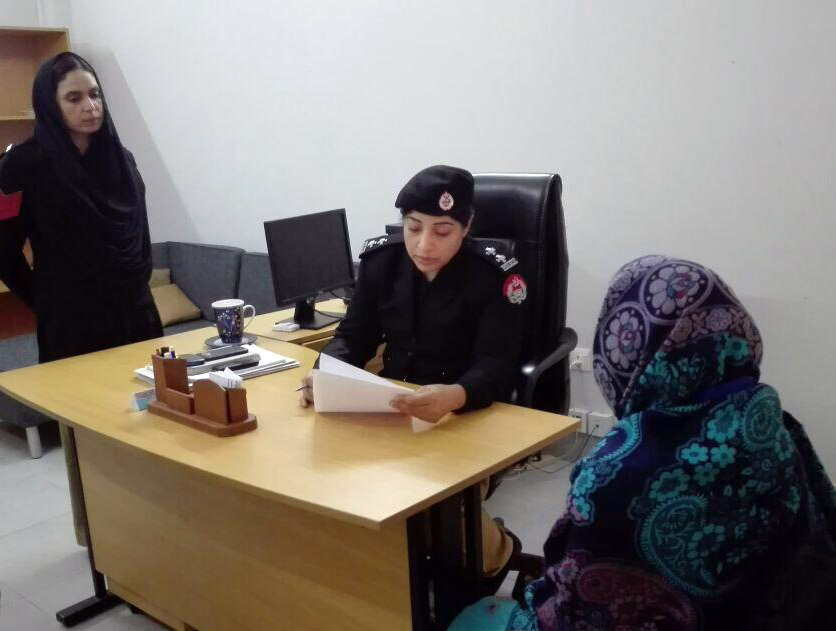 Naseer said the mindset of women in rural areas is changing. “They are demanding to educate their daughters in many of the rural areas, which is a wonderful thing,” she said.

Viqar acknowledged that despite Punjab’s strides, “we still have a lot of work to do.”

Almost 75 percent of the female labor force in Punjab earns below minimum wage, according to the Punjab Commission on the Status of Women. Of the almost 50 million landowners in Punjab, only about 15 million of them are women, according to the Commission’s 2017 Gender Parity report. Viqar says economic independence is an important factor in empowering women in the country.

The women’s protection law also required establishing a helpline, and one of the biggest complaints heard in Punjab is related to inheritance or property rights, in addition to domestic violence. “We get calls from the most rural areas … women saying, ‘I have this piece of land that my brother confiscated and I want ownership and control of my land,'” Viqar said.

“My message to any woman facing problems like this: empower yourself, through willpower you can be independent.”

In Perveen’s case, the now 39-year-old Punjab Basic Health Department worker remarried in 2015 and with the support of her second husband got help from the women’s center. The land dispute is ongoing, but Parveen said after multiple counseling sessions, her family members have stopped their abuse. She is continuing independent sessions with VAWC psychologists focused toward rehabilitation and confidence-building.

“I am not a victim. These are my rights and I can do all of this through myself,” she said, calling her children her “motivation” to keep pursuing justice. “My message to any woman facing problems like this: empower yourself, through willpower you can be independent.”