Life Along the Border Amidst the Drug War 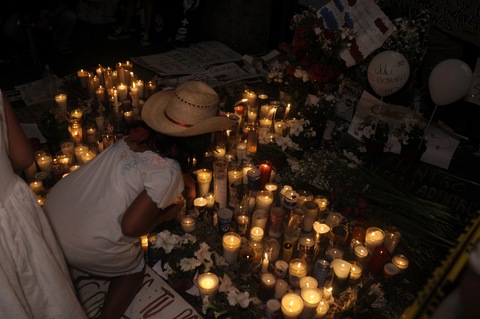 The drug-related violence in Mexico continues to escalate. Recently, soldiers discovered 11 more bodies in mass graves in the northern state of Durango. Mexican officials have now found 168 bodies in mass graves this month alone, and they believe many are those of drug cartel victims. In the past four years, drug violence has been cited in the deaths of more than 34,600 people.

We’ve compiled some recent public media coverage of the U.S.-Mexico border ahead of tonight’s NewsHour report on the escalating violence.

– Many Mexicans were furious when it was recently revealed that the U.S. Bureau of Alcohol, Tobacco, Firearms and Explosives (ATF) purposefully allows firearms across the border into Mexico in order to track their use. Laura Carlsen, Director of the Americas Program at the Center for International Policy explains the scandal surrounding the program dubbed “Operation Fast and Furious.”
[WBEZ]