In Sudan, no one is clear on what happens after al-Bashir

CAIRO — As violent anti-government protests enter their fourth week, Sudan appears headed toward political paralysis, with drawn-out unrest across much of the country and a fractured opposition without a clear idea of what to do if the country’s leader of 29 years loses power.

Even for a country that looks unwieldy when it’s not tearing itself apart, President Omar al-Bashir’s years at the helm have turned Sudan into a cautionary tale — from genocide and bloody rebellions to ethnic cleansing, starvation and rampant corruption.

But Sudan has been hard to rule way before al-Bashir seized power in a 1989 military coup. Protest leaders say a whole new start is needed if the country is to stand any chance of progressing.

“There may be very few people out there who still support this regime, the way it governed or its use of an Islamic narrative,” said Othman Mirghani, a prominent Sudanese analyst. “The conclusion reached by the people is that this regime must be brought down and the search start for a modern Sudanese state based on contemporary values.”

Here is a look at where things stand after more than three weeks of protests, which claimed at least 40 lives.

The military and democratically elected governments have taken turns ruling Sudan since independence in 1956, with coups bringing the generals to power, only to be brought down eventually by popular uprisings. The only exception was in 1986 when the army honored its promise to hand over the reins to an elected government a year after it seized power.

The military has been the dominant force in Sudan since independence, analysts and activists say. Al-Bashir hails from the military, but he has sidelined the army as the country’s main fighting force, replacing it with loyal paramilitary forces he created.

That has frustrated middle and lower ranking officers, in large part because the state’s largesse has gone to the paramilitary forces and security agencies, not them. 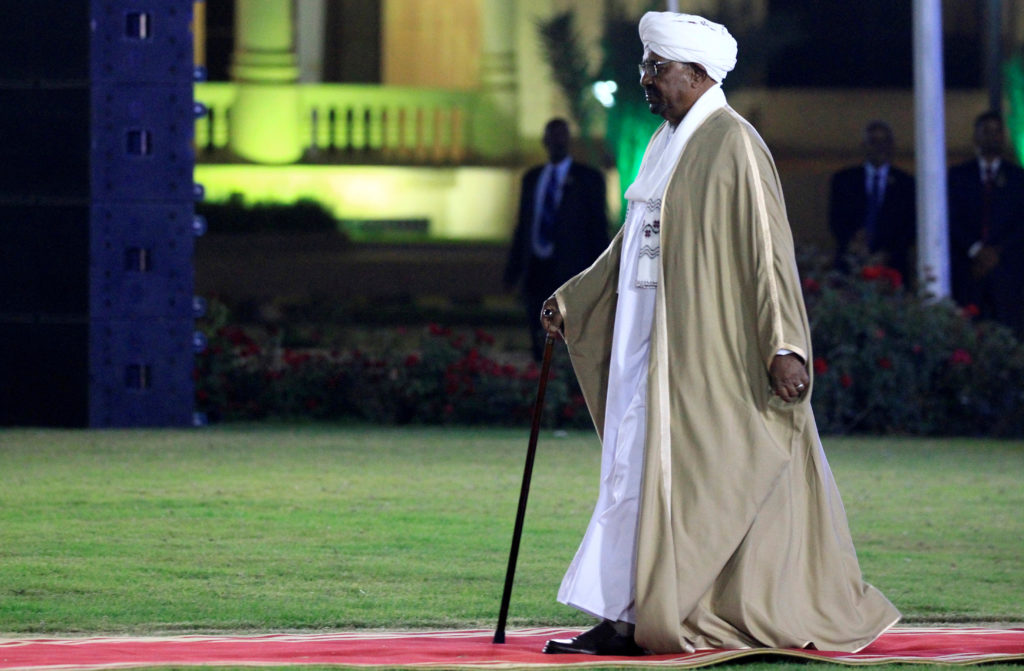 Sudan’s President Omar al-Bashir arrives ahead of delivering his addresses to the nation on the eve of the 63rd Independence Day anniversary at the Presidential Palace in Khartoum, Sudan December 31, 2018. Photo By Mohamed Nureldin Abdallah/Reuters

Since the current protests began Dec. 19, the military twice stated its support for the country’s “leadership” and pledged to protect the people’s “achievements.” Neither time did it mention al-Bashir by name.

Army troops have deployed to protect vital state installations but have not tried to stop protests and, in some cases, appeared to offer a measure of protection for the demonstrators.

All that raises the possibility the military could take over again and remove al-Bashir. But many fear the Sudan Rapid Forces, a 70,000-strong, well-armed paramilitary force of tribesmen allied with al-Bashir, could respond by stepping in, whether to protect the president or install someone of their own.

Curiously, the 74-year-old al-Bashir said Tuesday he would not mind if he is replaced by someone from the military.

Egyptian Sudan expert Hany Raslan said that “in any normal country, al-Bashir’s comments would have been interpreted as part of a transfer of power, but that is Sudan and he is most likely just trying to curry favor with the military.”

If Sudan’s stretches of military rule brought suppression of freedoms and human rights violations, its brief democratic spells — 1956-1958, 1964-1969 and 1986-1989 — were defined by their ineffectiveness. Traditional parties like the Umma and Democratic Union governed, but their failure to build a modern state and put the economy on solid footing paved the way for the next military takeover.

Al-Bashir seized power with the backing of the military and Islamists, who then formed the bedrock of his rule. For the past three decades, his National Congress Party — dominated by hardline Islamists — has had a lock on government and dominated the economy.

The leadership has styled itself as bringing Islamic rule by Shariah to Sudan and styled its past wars as “jihad,” whether against southerners or against insurgents in the western Darfur region. Al-Bashir often denounces “secularists” as Sudan’s worst enemies and touts his long rule as proof of God’s support.

Critics, however, say the Islamist ideology has largely become a veneer for a political machine that allows al-Bashir’s relatives, loyalists, politicians and businessmen to amass wealth by their links to the government.

“It is not an Islamic experiment, it is an experiment that uses religious slogans as a cover for practices that have nothing to do with Islam,” said Mirghani, the Sudanese analyst.

But even if al-Bashir goes, his cadres and other loyalists will still have considerable power and are likely to resist major change, backed by a religious rhetoric that can still rally some in the population to their side. 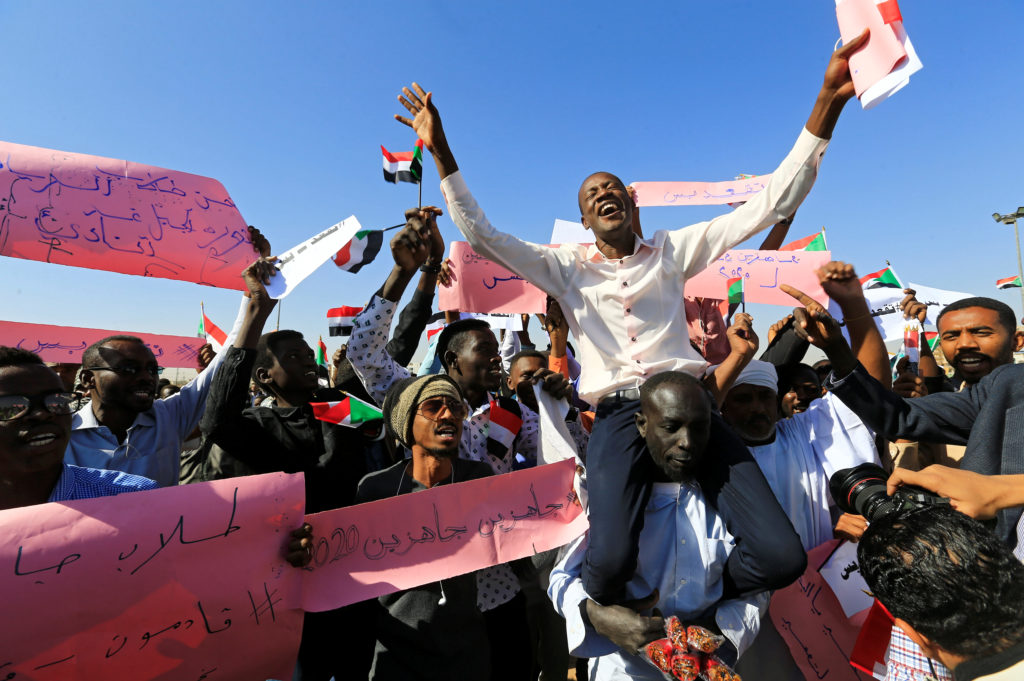 Supporters of Sudan’s President Omar al-Bashir chant slogans to his favour during a rally at Green Square in Khartoum, Sudan January 9, 2019. Photo By Mohamed Nureldin Abdallah/Reuters

When past popular uprisings succeeded, the elected governments that followed were chiefly built around the Umma and Democratic Union parties.

These two traditional parties are now weak and fractured. Moreover, their political discourse is also immersed in religion, something which does not resonate with many in the new generation of mainly young street activists loyal to liberal parties and professional unions or those acting independently.

“It will be a misguided step if we publicly describe ourselves as liberals or secularists, but what we are looking for is policies that are essentially liberal while not blatantly contrary to Islamic teachings,” said a 26-year-old protester. “We need a government of technocrats. We are done with the traditional parties,” she said, speaking on condition she not be named for fear of reprisals.

The activists and analysts say the weakness of opposition groups is a direct product of al-Bashir’s divide-and-rule tactics, constantly luring senior politicians away from their parties with lofty promises of national unity and a shot at positions that they can abuse for personal gain.

The protesters often chant “freedom, peace and justice” and “the people want to bring down the regime” — the latter the chief slogan of the Arab Spring revolts of 2011. But there isn’t a clear path for reaching their ambitions.

“There is no doubt that there will be big changes as a result of these protests, but they will never be of the magnitude that Sudan needs,” said another activist, who also did not want to be named.

“Al-Bashir could resign or be removed by the army, but the Islamists have the power to reorganize and regain power,” she said.