In Syria, more than 100 killed in attacks as more people flee

BEIRUT — BEIRUT (AP) — Airstrikes in Syria killed more than 100 people Friday as civilians fled besieged areas for the second straight day. Syrian government forces stepped up their offensive in the rebel-held eastern suburbs of the capital, Damascus, capturing a major town and closing in on another under the cover of Russia’s air power.

The majority of the deaths occurred in eastern suburbs of Damascus, known as eastern Ghouta, where government forces have been on a crushing offensive for three weeks capturing 70 percent of the once besieged rebel-held area. The weekslong violence left more than 1,300 civilians dead, 5,000 wounded and forced thousands to flee to government-controlled areas.

Friday’s staggering death toll came a day after Syria passed the seven-year mark in its relentless civil war that has killed some 450,000 people and displaced half the country’s population.

“If the world does not move, Ghouta will be exterminated.”

The Britain-based Syrian Observatory for Human Rights said government and Russian forces have been bombing rebel-towns areas outside Damascus throughout Friday, killing 64 people in Kafr Batna and another 12 in Saqba. The Syrian Civil Defense search-and-rescue group reported 61 fatalities in Kafr Batna.

Later Friday, government forces captured the town of Jisreen, closing in on Saqba from the east, north and south, forcing opposition fighters to retreat west. The Syrian government is determined to seize Kafr Batna, Saqba and the rest of the besieged eastern Ghouta region from rebels.

The Observatory said Turkish shelling and airstrikes have killed another 27 people in the Kurdish-held town of Afrin in north Syria where Turkish troops and Turkey-backed Syrian opposition fighters have been on the offensive since Jan. 20. Turkey is getting closer to capturing the main town in the region, also called Afrin.

“If the world does not move, Ghouta will be exterminated,” said Siraj Mahmoud, a Civil Defense member in eastern Ghouta.

The attack on Kafr Batna was with cluster bombs, napalm-like incendiary weapons, and conventional explosives, the Observatory said.

Photos and videos released from the area showed charred bodies covered with sheets lined near what appeared to be shops.

The assault was part of an indiscriminate campaign by President Bashar Assad’s forces to retake the town and the rest of the enclave from the rebels.

A medical charity supporting hospitals in the Ghouta region, the Syrian American Medical Society, said doctors in Kafr Batna were treating patients for severe burn wounds. The charity said earlier in the day that it recorded 40 casualties on Friday.

Oways al-Shami, a spokesman for Syrian Civil Defense, said the airstrike targeted a market and a nearby residential area where scores of people have gathered. He said people were in the market to buy bread and vegetables at the time of the strike.

Dr. Zouhair Kahaleh, in the nearby town of Arbeen, said “the medical situation is catastrophic. We can’t stay in this situation for long.” He said the streets are closed, and “we can’t treat some of the cases here. It’s a major challenge to reach the wounded because of the intensity of the airstrikes.” 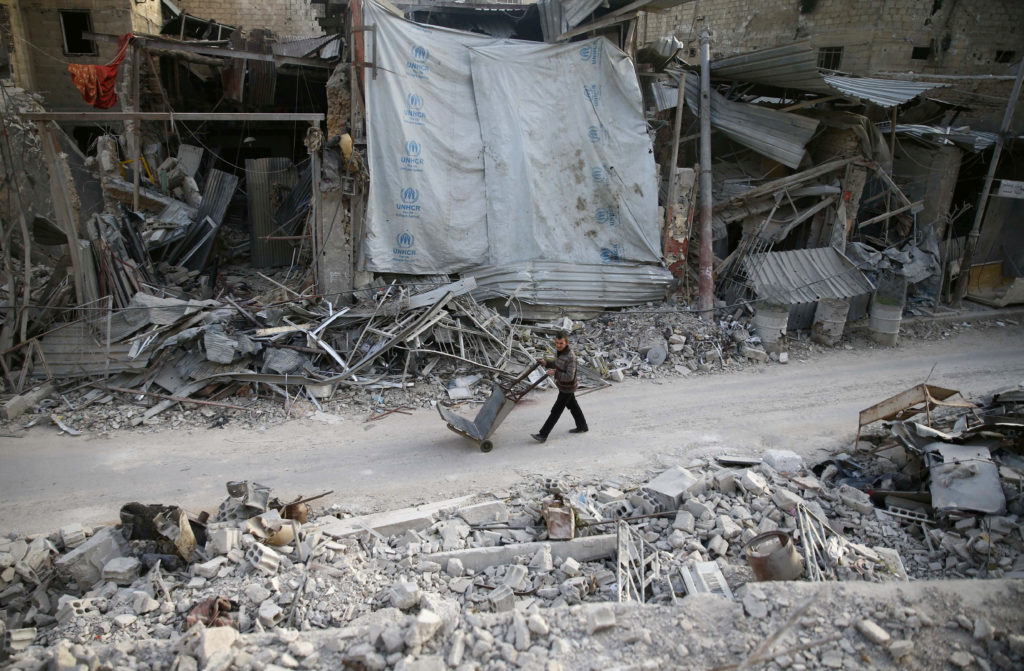 A man pushes a cart past damaged buildings at the besieged town of Douma, Syria. Photo by Bassam Khabieh/Reuters

Kahaleh said some operations have had to be postponed indefinitely because there are no specialized doctors in other area, which cannot currently be accessed.

Exhausted and shell-shocked civilians streamed out of eastern Ghouta for the second consecutive day heading to buses arranged by the government to transport them to a center for identification and relief.

A man interviewed on state-affiliated al-Ikhbariya TV said he had gone two days without food. Others said rebels hoarded food and humiliated civilians, even shooting people trying to leave.

The U.N. has warned of a malnutrition crisis in eastern Ghouta, which human rights groups have blamed on the government’s strangling blockade.

Russia’s Foreign Minister Sergey Lavrov said the Russian military and the Syrian government would extend the “cease-fire” in Damascus’ rebel-held suburbs for as long as it takes to allow all civilians to leave the area. Lavrov spoke in Kazakhstan where he met with the foreign ministers of Iran and Turkey over the situation in Syria and the three agreed that there can be no military solution to the conflict, according to Syria’s state news agency SANA.

In northern Syria, where Kurdish officials said Turkish shelling and airstrikes killed at least 22 civilians on Friday in the town of Afrin, the Turkish military urged civilians to leave and Syrian Kurdish militiamen to surrender to besieging Turkish forces.

The media office for the Syrian Democratic Forces, a Kurdish-led and U.S.-backed force that operates in the Kurdish autonomous region in the north, also said that at least 30 were wounded in Friday’s attacks.

The U.N. has warned of a malnutrition crisis in eastern Ghouta, which human rights groups have blamed on the government’s strangling blockade.

Victims lay dead on the streets in pools of blood, according to a video posted the Observatory, which monitors Syria’s seven-year civil war and which put the death toll at 18. Different casualty tolls are common in the immediate aftermath of big attacks.

Since their January offensive began, Turkish forces have nearly encircled Afrin in an effort to drive the Syrian Kurdish fighters from the town and surrounding region. Residents say they are facing bread, water, and electricity shortages.

The Observatory and activists reported seeing hundreds of civilians filing out of Afrin to neighboring villages on Thursday and Friday, looking for relief. Tens of thousands of civilians are believed to still be inside.

Earlier Friday, Turkish aircraft dropped flyers in Arabic and Kurdish on Afrin, asking residents to stay away from “terrorist positions” — a reference to the Syrian Kurdish fighters — and to not let themselves be used as “human shields.”

The leaflets claimed that civilians seeking to flee Afrin would be guaranteed safety by the Turkish military and urged Syrian Kurdish fighters to “trust the hand we extend to you.”

“Come surrender! A calm and peaceful future awaits you in Afrin,” the leaflets read.

Thursday saw the largest single-day exodus of civilians in Syria’s civil war. The government offensive has pushed further into eastern Ghouta, chipping away at one of the largest and most significant opposition bastions since the early days of the rebellion — communities where some 400,000 people are estimated to be holed up.

Since mid-February, Syrian troops have targeted Damascus’ sprawling suburbs with shells, airstrikes and, at times, even toxic gas, according to opposition medics.

Last weekend, Syrian troops divided the enclave into three sectors, isolating the major urban centers and enabling a swift advance. On Thursday, men, women and children emerged from Hamouria and nearby opposition towns, carrying mats and other possessions that sometimes poked out of suitcases.