For weeks during brief cease-fires in the volatile rebel-held Eastern Ghouta region outside Damascus, few Syrians left. That all changed this week as thousands escaping Syrian government bombings left by foot with the only belongings they could carry.

“There is no water, no medicine that could (be) provided to our children, not even food,” said one evacuee.

More than 12,000 people have fled for safety since the Syrian government stepped up efforts to retake the rebel-controlled area in mid-February. About 400,000 people are still living in Eastern Ghouta without access to basic medical supplies, according to the World Health Organization.

In the latest round of airstrikes, at least 46 people reportedly were killed in Eastern Ghouta. 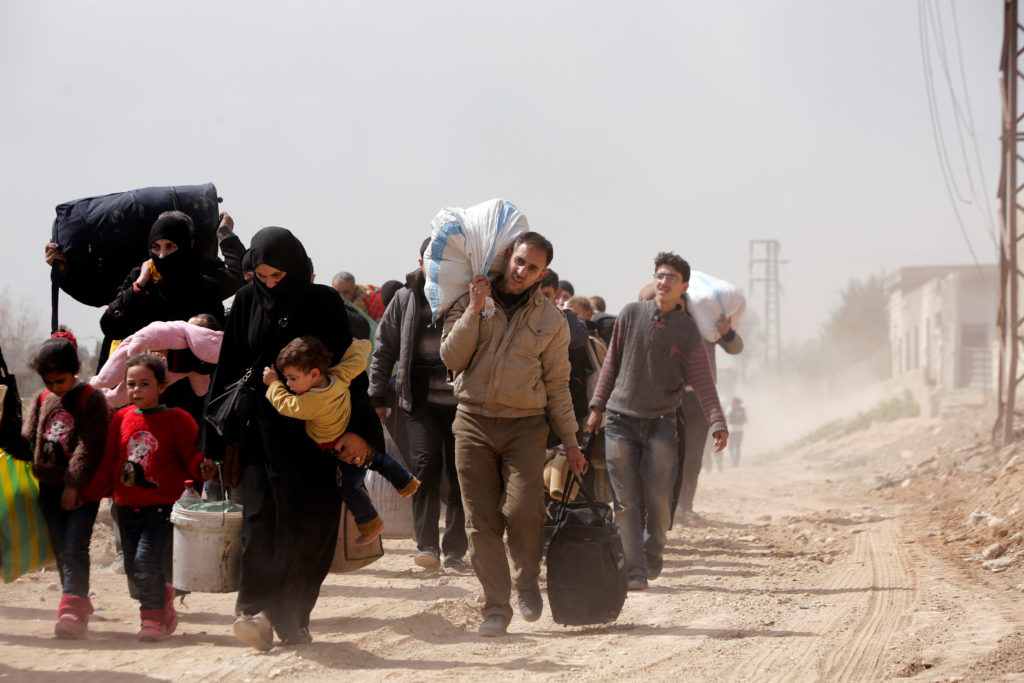 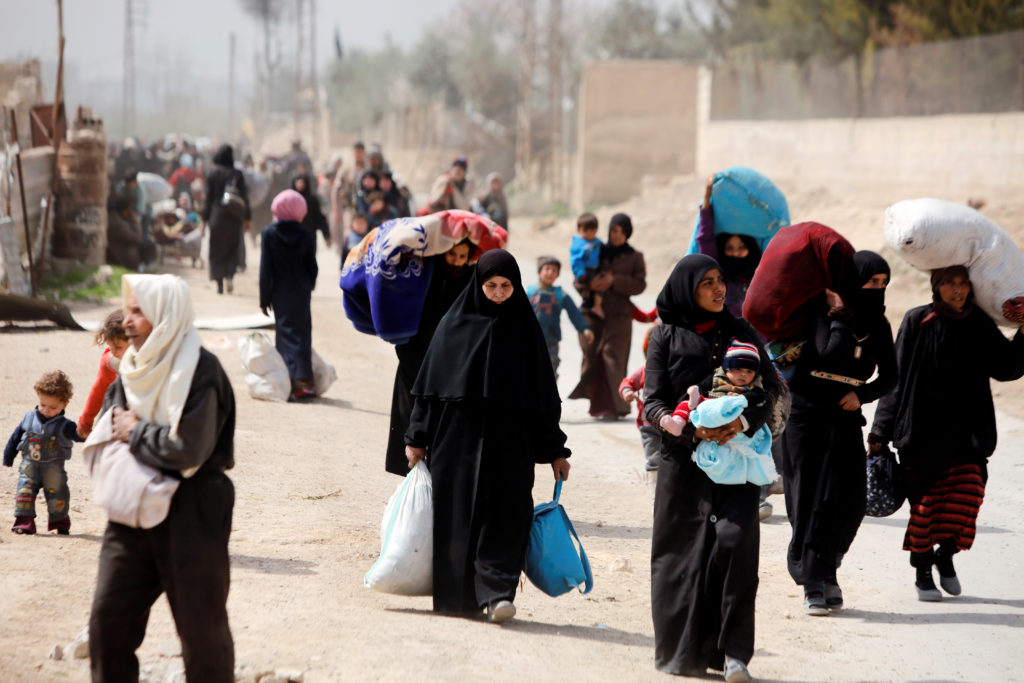 People walk with their belongings from the rebel-held town of Hammouriyeh in the village of Beit Sawa, Eastern Ghouta, Syria. Photo by Omar Sanadiki/Reuters

“It is unacceptable that children, women, and men are dying from injuries and illnesses that are easily treatable and preventable,” said WHO Director-General Dr. Tedros. Adhanom Ghebreyesus.

Save the Children reported this week that civilian casualties have increased by 45 percent since the declaration of “de-escalation zones,” which were designated last year to shield areas from shelling. 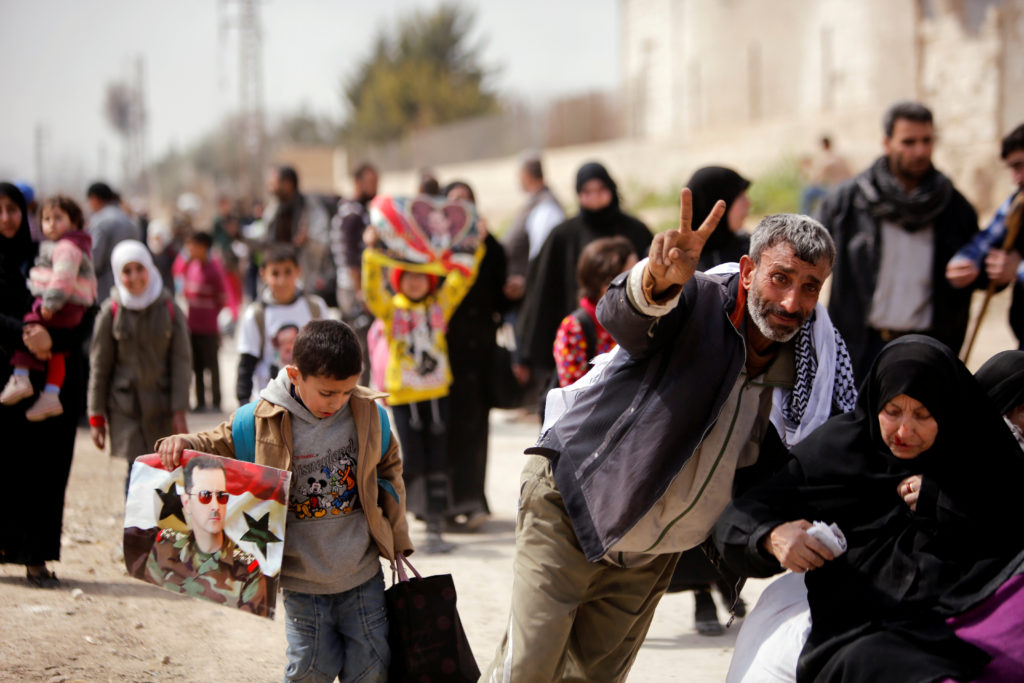 More than 12,000 Syrians have left the Eastern Ghouta region since last month. Photo by Omar Sanadiki/Reuters

An estimated 8.6 million children out of 10 million children in all of Syria are in dire need of assistance, according to the U.N. In particular, children with disabilities have trouble getting the equipment and health care they need from their families and overtaxed host communities. 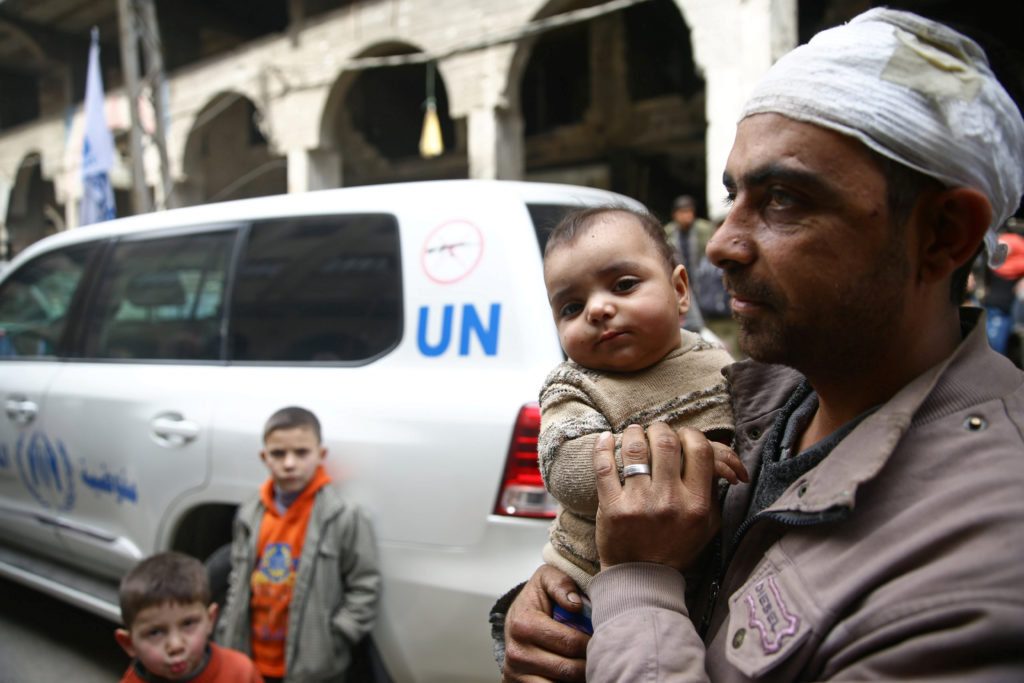 About 400,000 people are still living in Eastern Ghouta without access to basic medical supplies, according to the World Health Organization. Photo by Bassam Khabieh/Reuters

“Drained and exhausted from seven years of war, family resources inside Syria and neighboring countries are running dangerously low, pushing families to extreme measures just to survive. Early marriage, child recruitment and child labor are on the rise across the board. In 2017, three times more children were recruited into the fighting than in 2015,” UNICEF said.

Students in Berlin collected 740 teddy bears in front of the concert hall Konzerthaus during an event of the World Vision Organisation to raise awareness about 740,000 Syrian refugee children who can’t attend school in their current situation. Photo by Hannibal Hanschke/Reuters

Left: A child sleeps in a bag in the village of Beit Sawa, Eastern Ghouta, in Syria on March 15. Thousands are fleeing since aerial bombardments intensified. Photo by Omar Sanadiki/Reuters