AVDIIVKA, Ukraine — U.S.-made medical equipment, night-vision devices and counter-mortar radar makes a difference for Ukrainian troops fighting Kremlin-backed separatists on the front line of the standoff between Russia and the West. Sometimes, it’s the difference between life and death.

So when $400 million in U.S. military aid to Kyiv was held up this year, Ukrainians got nervous.

Every little bit of assistance helps in the World War I-style trenches of Avdiivka, where conscripts and volunteer soldiers use shovels to shore up mud walls, chop wood for makeshift stoves, and cook their own food from local vegetables and canned supplies.

Rostyslav Pokotylo shows off the American flag inside the case for his night-vision gun scope, which he credits with saving his life in 2017.

“I ended up in a combat zone … If not for this, who knows what would have happened,” he says. “With its help, I could see the enemy. I saw the enemy first, and we opened fire.”

As impeachment hearings play out in Washington, Ukrainian troops at the front described their hopes and fears to The Associated Press in the five-year conflict that has taken 13,000 lives and still simmers on, sporadic gunfire punctuating the autumn calm.

The holdup in aid wasn’t something palpable that immediately affected the Ukrainian troops in action; it had more of a psychological impact, raising fears here that the U.S. was turning its back on Ukraine. The aid was later released, but the scandal has effectively frozen U.S.-Ukrainian relations and thrown long-term U.S. backing into doubt.

“We need support, and without support of our allies we won’t win this war,” Pokotylo said.

Avdiivka feels a world away from Washington. A soldier works his trench with a pickax. Another hangs wet laundry in the damp chill. Another cleans his Kalashnikov rifle with a piece of old rag. 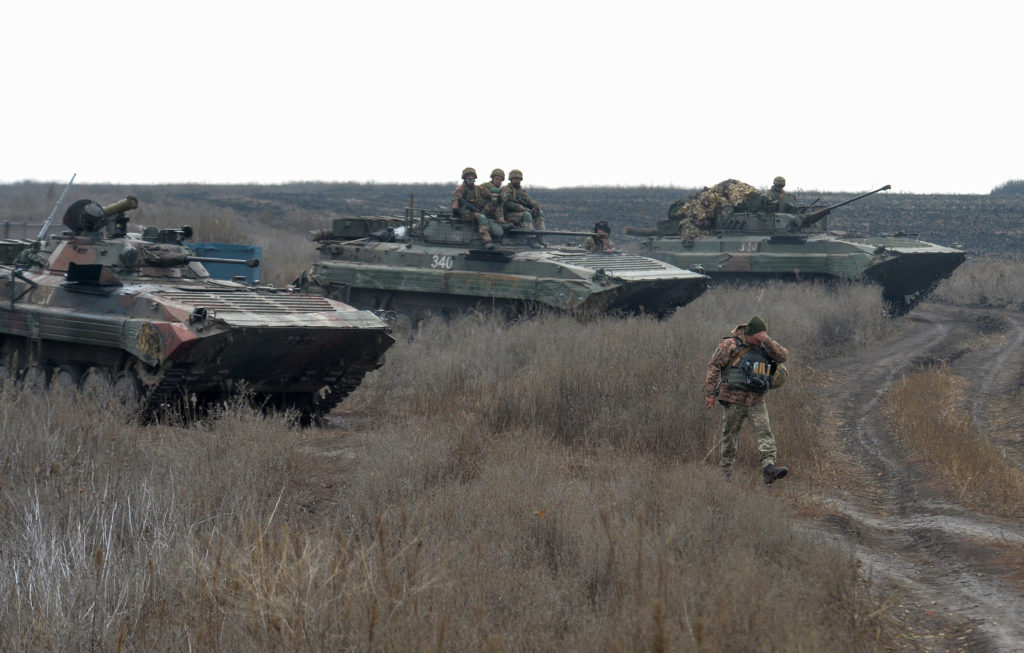 Servicemen of the Ukrainian armed forces get ready to ride armored personnel carriers (APC) in the settlement of Bohdanivka, which is located in a disengagement area near the contact line with Russian-backed separatist rebels, in Donetsk Region, Ukraine November 9, 2019. REUTERS/Oleksandr Klymenko

While the U.S. aid helped fill some of the gaps in Ukraine’s military capability, with counter-mortar radars being one highly welcome addition, its army continues to rely on aging Soviet-era weapons and often lacks essential supplies.

On the other side of the front line, separatists work from a similar, Soviet-made arsenal.

After large-scale battles involving tanks and long-range artillery early in the conflict, fighting has devolved into an oddly primitive standoff, with both sides stuck in trenches and occasionally exchanging artillery salvos and gunfire. Ukraine used warplanes and helicopter gunships early on, but it grounded them after heavy losses from anti-aircraft fire.

Strategically located near the airport of regional capital Donetsk and home to Ukraine’s main coke and chemical plant, Avdiivka was seized by separatists at the start of the 2014 uprising, then recaptured by Ukrainian forces a few months later.

Heavy fighting erupted again in 2017, and Avdiivka remains a key spot on the front. About 10 days ago, two Ukrainian soldiers were killed by light artillery fire as they unloaded firewood from their vehicle. 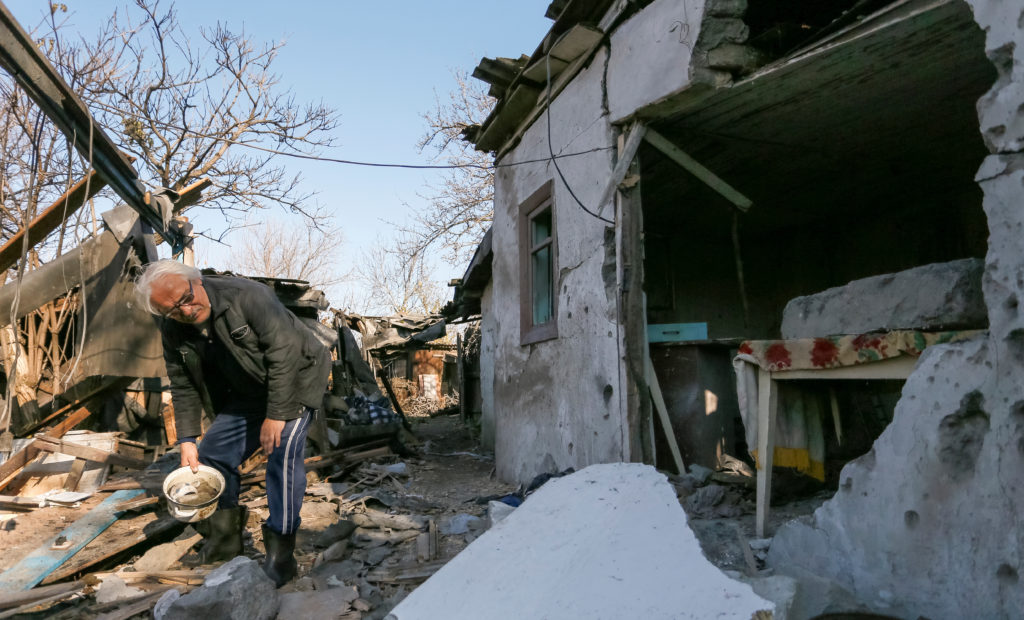 “My family is in danger. My loved ones,” said Kyrylo, who’s says he’s fighting to protect his wife and 10-month-old daughter.

“I want all my comrades to survive,” he said, his eyes welling up. “Many die.”

National symbolism is ubiquitous around the trenches — a Ukrainian trident hanging on a wooden pillar, a Ukrainian flag spread on a table. The day-to-day rituals are tedious, and the ambiance is subdued but tense, as gunfire can erupt at any moment.

The war began in 2014, after Ukraine’s former Moscow-friendly president was driven from office by massive protests on Kyiv’s Maidan square. In retaliation and in fear of Western encroachment on what it sees as its geopolitical backyard, Russia annexed the Crimean Peninsula and helped foment an insurgency in eastern Ukraine. Many in the separatist-held areas see Russia as their more natural trading partner and backer than the United States, while many elsewhere in Ukraine lean firmly toward the West.

The centerpiece of the lethal U.S. military aid provided by the Trump administration are Javelin anti-tank missiles.

The centerpiece of the lethal U.S. military aid provided by the Trump administration are Javelin anti-tank missiles. They’re not being used in the field, soldiers say, but serve as a deterrent, a symbol of U.S. power and support — and a confidence-booster for Ukrainian troops.

“The quality of emergency medical treatment depends on what’s in the first-aid kit,” he said.

Shiny green U.S.-made tents serve as a triage point for a hospital in Chasiv Yar, farther north along the front, where radiologist Oleh Kyryiak X-rays a soldier’s chest, and a colleague uses an American ultrasound machine to monitor a patient’s heart.

“The American equipment is higher quality than ours. Of course, we’d like to have help (from the U.S.), friendly relations,” Kyryiak said. 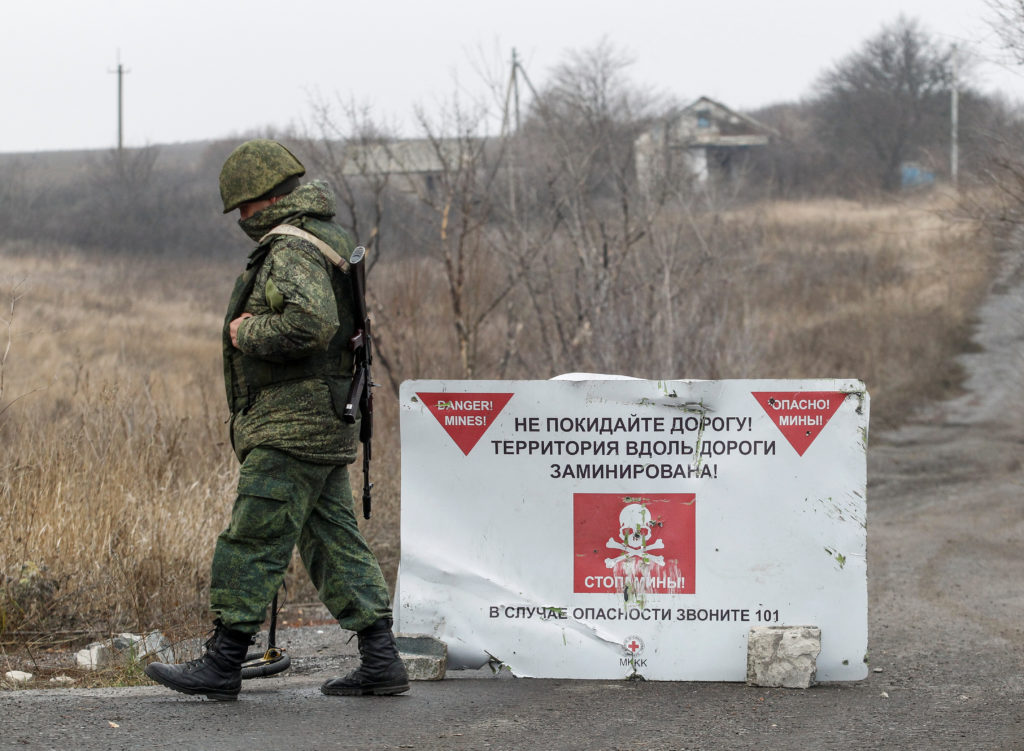 A serviceman of the self-proclaimed Donetsk People’s Republic stands guard at a checkpoint near the settlement of Petrovskoye (Petrivske), which is located in a disengagement area near the contact line with the Ukrainian armed forces in Donetsk region, Ukraine November 9, 2019. REUTERS/Alexander Ermochenko

Ukrainians at the front have another worry: That the U.S. impeachment drama has weakened Zelenskiy so much that he’ll cede too much to Russian President Vladimir Putin in peace talks in Paris next month.

“Our guys died in droves – what was that for?” asked Dmytro, a soldier whose hometown of Popasna was captured by separatists for several months in 2014. “For Ukraine, victory at the end of the war is if we get the territory back.”

Left: Members of the Emergencies Ministry of the separatist Donetsk People's Republic place anti-tank mines in a crater while demining the area at the militants' former positions on the contact line with the Ukrainian armed forces following troop withdrawals near the settlement of Petrivske (Petrovskoye) in Donetsk region, Ukraine November 19, 2019. REUTERS/Alexander Ermochenko - RC2DED941CN2