India arrests over 500 in Kashmir as Pakistan cuts railway

NEW DELHI — Indian security forces have arrested more than 500 people since New Delhi imposed a communications blackout and security clampdown in divided Kashmir, where people remained holed up in their homes for a fourth day.

Pakistan, which claims the divided Himalayan region together with India, on Thursday suspended a key train service with India over change in Kashmir’s special status by New Delhi, as tensions between the rivals soared.

India’s government this week revoked the special status of Jammu and Kashmir and downgraded the region from statehood to a territory. Rebels in Muslim-majority Kashmir have been fighting Indian rule in the portion it administers for decades.

State-run All India Radio, which reported on the arrests without details, also said that cross-border firing by Indian and Pakistani troops hit the Rajouri sector of the Indian-controlled Kashmir late Wednesday.

Prime Minister Narendra Modi is expected to address the nation on Thursday to discuss Kashmir. His national security adviser, Ajit Doval, visited the region on Wednesday to assess the law and order situation.

Activist Ali Mohammed told the New Delhi Television news channel that he has been organizing ambulances to carry sick poor people to hospitals in Srinagar, the main city in India’s portion of Kashmir, as local residents can’t even use phones to ask for medical help.

In New Delhi, opposition Congress party activist Tehseen Poonawalla said he expected the Supreme Court to hear his petition on Thursday seeking immediate lifting of curfew and other restrictions, including blocking of phone lines, internet and news channels in Kashmir. He also sought the immediate release of Kashmiri leaders who have been detained, including Omar Abdullah and Mehbooba Mufti.

In response to India’s action, Pakistan’s Federal Minister for Railways Sheikh Rashid Ahmad suspended the Express, or Friendship Express, train service to India starting Thursday. The suspension announcement was made as passengers were waiting to board a train in the eastern city of Lahore to travel across the border. 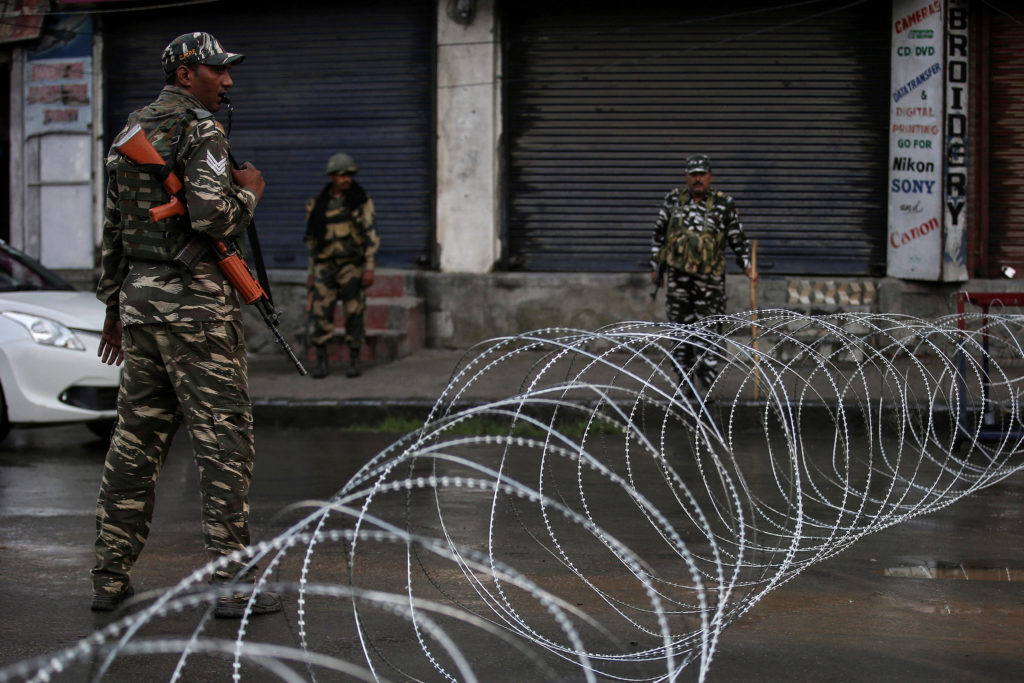 Indian security forces personnel stand guard next to concertina wire laid across a road during restrictions after the government scrapped special status for Kashmir, in Srinagar August 7, 2019. Photo by REUTERS/Danish Ismail

Islamabad on Wednesday said it would downgrade its diplomatic ties with New Delhi, expel the Indian ambassador and suspend trade. Prime Minister Imran Khan told Pakistan’s National Security Committee that his government will use all diplomatic channels “to expose the brutal Indian racist regime” and human rights violations in Kashmir, the government’s statement said.

India regretted Pakistan’s steps and said in a statement that “the intention behind these measures is obviously to present an alarming picture to the world of our bilateral ties.”

The External Affairs Ministry said it was not surprising that Pakistan has negatively perceived India’s decision to end Kashmir’s special status as Islamabad “has used such sentiments to justify its cross-border terrorism.'”

Describing India’s latest steps in Kashmir as internal affairs, the statement urged Pakistan to review its decision to downgrade ties so that normal channels for diplomatic communications are preserved.

He condemned the communications blackout and security clampdown in Indian-controlled Kashmir, saying “Kashmir has been converted into the world’s biggest jail.”

“They are taking such actions in a panic,” he said, adding India has “touched something they don’t know how to get out of it.”

Faisal said that Pakistan never shut doors for talks with India in the past but India never positively responded to such offers. “Only they can say what they want now,” he said.

He said Pakistan had apprised Washington and other countries about the Indian actions. “We will continue to extend political diplomatic and moral support to the Kashmiris people in their struggle” aimed at getting the right of self-determination, he said.

An uneasy calm prevailed along the Line of Control where Pakistani troops face off Indian forces in Kashmir. People living in border villager were awaiting government instruction to move to safer places, although some residents had already moved to nearby towns. 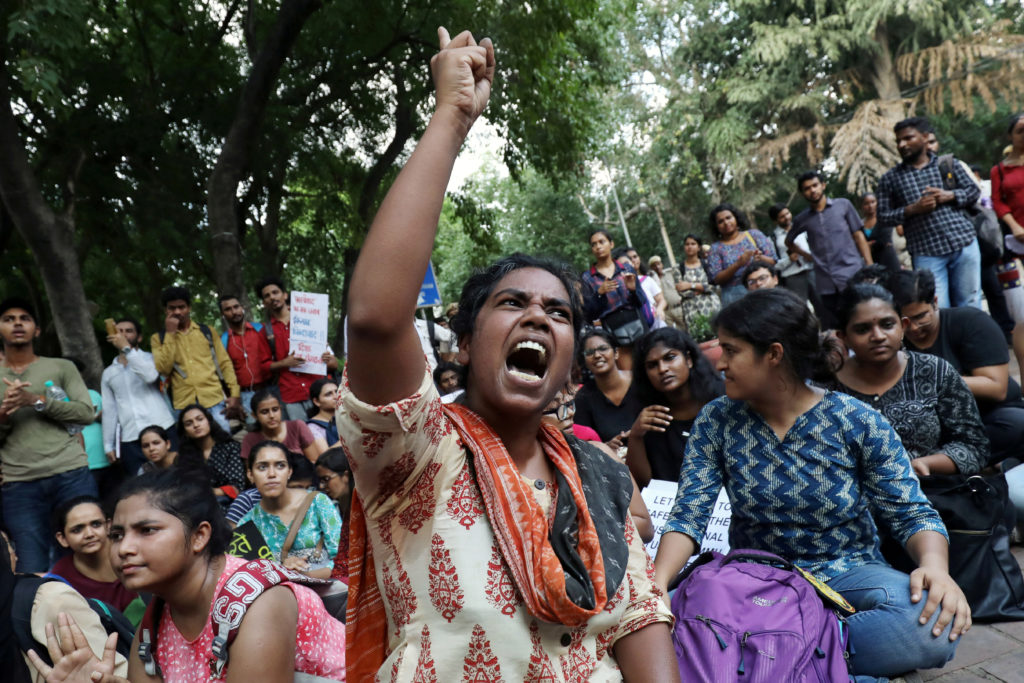 A student shouts slogans during a protest against the scrapping of the special constitutional status for Kashmir by the government, in New Delhi, India, August 8, 2019. Photo by REUTERS/Anushree Fadnavis

India and Pakistan have fought two of their three wars over control of Kashmir. The first war ended in 1948 with a U.N.-brokered cease-fire that left Kashmir divided and promised its people a U.N.-sponsored referendum on the region’s future.

Pakistan said it would ask the United Nations to pressure India to reverse its decision to downgrade Kashmir from a state to two separate territories. The region also lost its right to fly its own flag and make many of its own decisions.

A recent U.N. human rights report expressed concern over the rising number of civilian casualties in 2018 — believed to be the highest in a decade — in Kashmir and said neither India nor Pakistan has taken concrete steps to address the situation.

The report notes that in Indian-ruled Kashmir, accountability for violations committed by members of the Indian security forces remains virtually non-existent.

“Arbitrary detention and so-called cordon and search operations leading to a range of human rights violations continue to be deeply problematic, as do the special legal regimes applying to Indian-Administered Kashmir,” it said.

On Thursday, Indian authorities in Kargil district of the Leh region, which used to be part of Jammu and Kashmir state, banned the assembly of more than five people at one place to prevent protests against the division of Kashmir into two union territories.

The decision came after religious and political organizations in Kargil condemned the Indian government decision and held a district-wide shutdown on Tuesday.

Kashmir is India’s only Muslim-majority state and most people oppose Indian rule. The insurgency that began in 1989 and India’s ensuing crackdown have killed more than 70,000 people.