NEW DELHI — India’s Supreme Court on Saturday ruled in favor of a Hindu temple on a disputed religious ground in the country’s north and ordered that alternative land be given to Muslims to build a mosque — a verdict in a highly contentious case that was immediately deplored by a key Muslim body.

The dispute over land ownership has been one of India’s most heated issues, with Hindu nationalists demanding a temple on the site in the town of Ayodhya in Uttar Pradesh state for more than a century. The 16th century Babri Masjid mosque was destroyed by Hindu hard-liners in December 1992, sparking massive Hindu-Muslim violence that left some 2,000 people dead.

Saturday’s verdict paves the way for building the temple in place of the demolished mosque.

As the news broke, groups of jubilant Hindus poured into Ayodhya’s streets and distributed sweets to celebrate the verdict, but police soon persuaded them to return to their homes. As night fell, a large number of Hindus in the town lit candles, lamps and firecrackers to celebrate, and police faced a tougher time in curbing their enthusiasm.

The five Supreme Court justices who heard the case said in a unanimous judgment that 5 acres (2 hectares) of land will be allotted to the Muslim community to build a mosque, though it did not specify where. The court said the 5 acres is “restitution for the unlawful destruction of the mosque.”

The disputed land, meanwhile, will be given to a board of trustees for the construction of a temple to the Hindu god Ram. 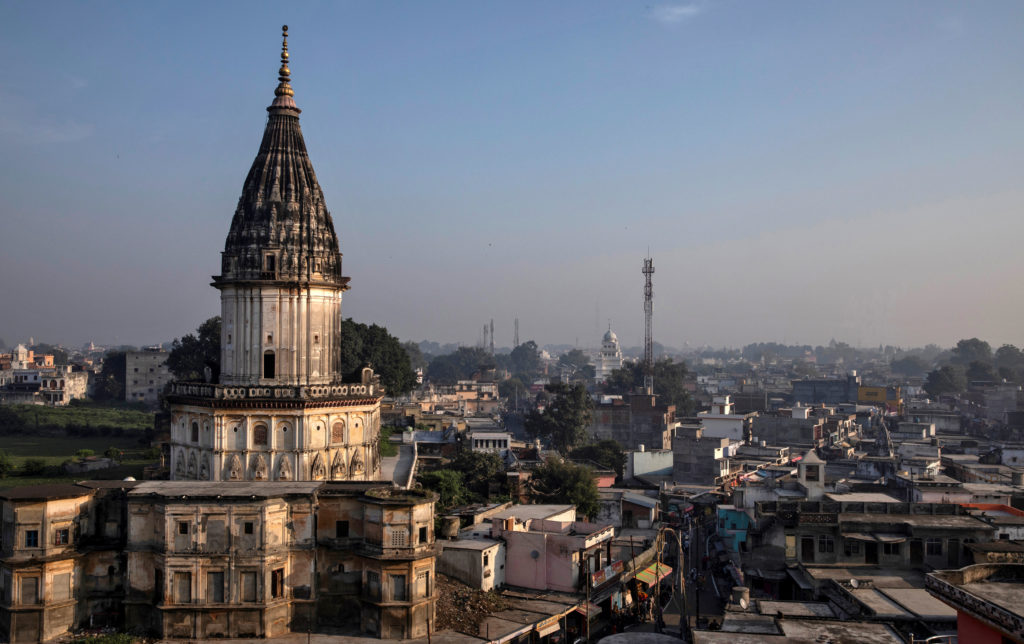 Hindu hard-liners have said they want to build a new temple to Ram on the site, which they revere as his birthplace. They say the mosque was built after a temple dedicated to the Hindu god was destroyed by Muslim invaders.

Zafaryab Jilani, a representative of the Uttar Pradesh Sunni Central Waqf Board, a key Muslim body in the state and a party to the dispute, opposed the ruling.

“We are not satisfied with the verdict and it’s not up to our expectation,” he said. “These 5 acres of land don’t mean anything to us. We are examining the verdict and whatever legal course is open for us.”

Jilani hinted at filing a review petition in the Supreme Court challenging the verdict. At the same time, he appealed to members of all communities to maintain peace.

The judges said that the demolition of the mosque in 1992 was “in violation of the status quo orders of this court.” But they didn’t order any punitive action against those who demolished the mosque in the presence of several top leaders of current Prime Minister Narendra Modi’s Bharatiya Janata Party.

Modi hailed the decision and said it had settled a long-standing matter.

“Every point of view was given adequate time and opportunity to express differing points of view. This verdict will further increase people’s faith in judicial processes,” Modi tweeted.

The five judges said Hindus’ belief that Ram was born at the site “is undisputed,” and that Muslims have not provided evidence that they were in exclusive possession of the disputed site. 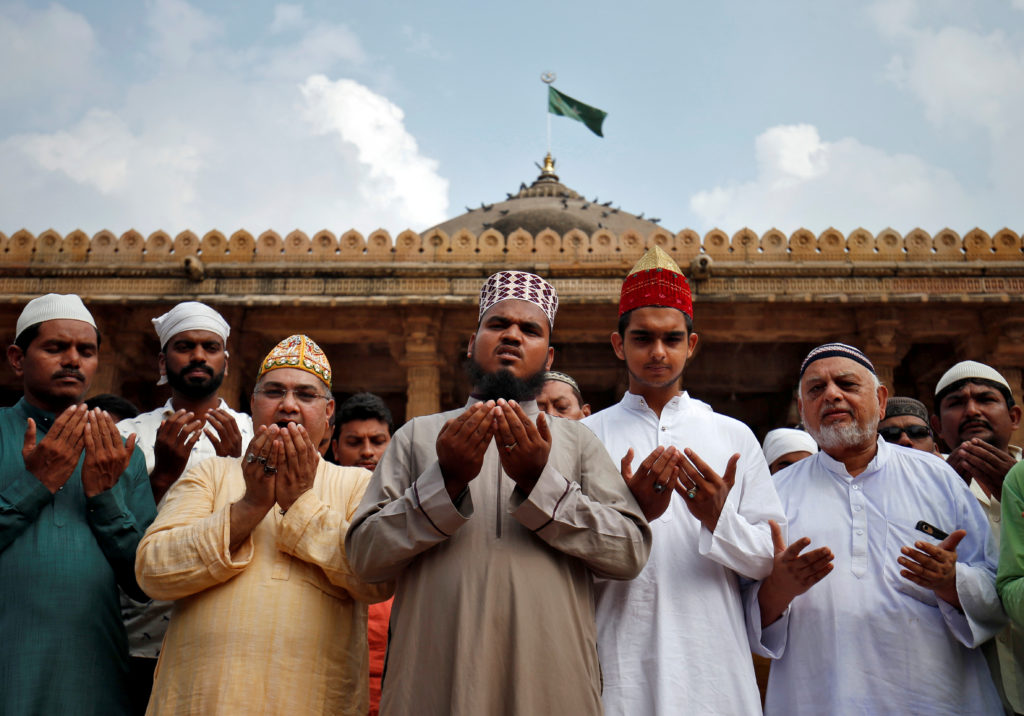 Muslims pray for peace ahead of verdict on a disputed religious site in Ayodhya, inside a mosque premises in Ahmedabad, India, November 8, 2019. Photo by Amit Dave / Reuters.

The judges also said the Uttar Pradesh Sunni Central Waqf Board had failed to establish its case. On the contrary, Hindus established their case that they were in possession of the outer courtyard of the disputed complex, they said.

Vishnu Shankar Jain, an attorney who represented the Hindu community in the case, said the journey over several years had been a struggle.

“It was a huge legal battle and we are happy that we convinced the Supreme Court. It’s a historic moment for Hindus,” he said.

In Islamabad, Pakistan’s foreign minister, Shah Mahmood Qureshi, criticized the verdict, saying it was indicative of the “hate based mindset” of Modi’s government.

After the demolition of the mosque, Hindus and Muslims took the issue to a lower court, which in 2010 ruled that the disputed land should be divided into three parts – two for Hindus and one for Muslims.

That was challenged in the Supreme Court by both communities.

The five judges started daily proceedings in August after mediation failed to find a compromise.

Modi had promised to build the temple during 2014 elections that brought him to power. But he later decided to wait for the court verdict despite pressure from millions of Hindu hard-liners who asked his government to bring legislation to build the temple. 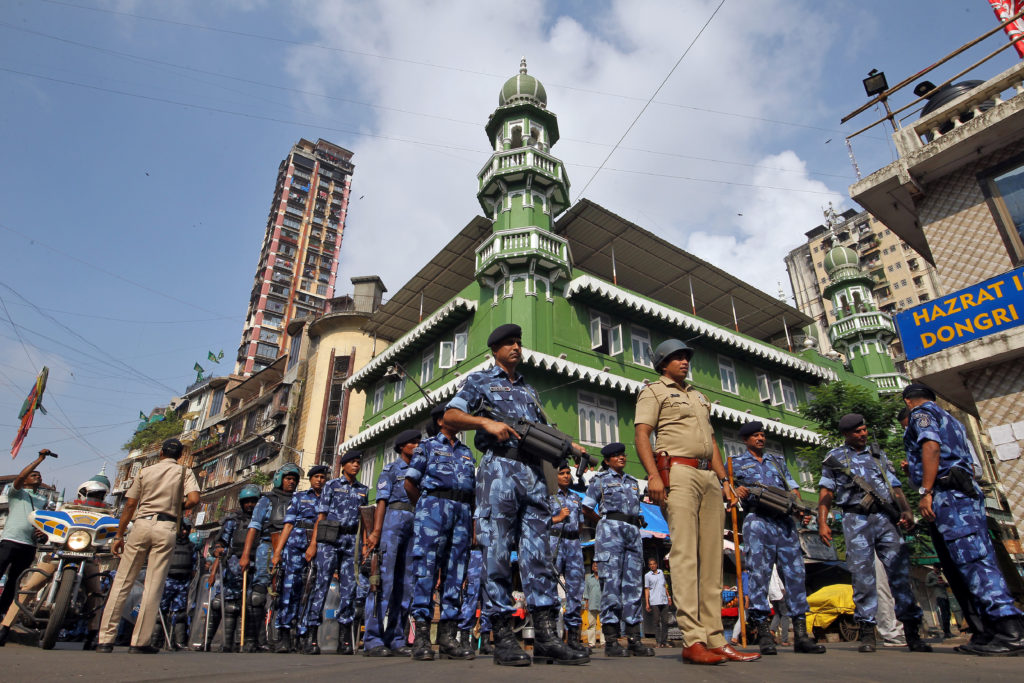 Authorities on Saturday increased security in Ayodhya, which is located 550 kilometers (350 miles) east of New Delhi, and deployed more than 5,000 paramilitary forces to prevent attacks by Hindu activists on Muslims, who comprise 6% of the town’s more than 55,500 people.

Overall, Hindus comprise more than 80% and Muslims around 14% of India’s 1.3 billion people.

The town looked deserted on Saturday, with authorities turning back thousands of Hindu pilgrims who were congregating for a religious event scheduled for Tuesday.

Police have arrested about 500 people for posting provocative messages on social media in Uttar Pradesh. Police also have detained around 5,000 people with criminal backgrounds across the state to prevent them from creating trouble after the court verdict, according to Uttar Pradesh government spokesman Awanish Awasthi.

Authorities have stopped the entry of people into the state through the land border from Nepal, and ordered all of the state’s schools and colleges to remain closed until Monday.