Sunday’s voting in 59 constituencies, including seven in New Delhi, the capital, completes polling for 483 of 543 seats in the lower house of Parliament. The voting for the remaining 60 seats will be held on May 19, and vote counting begins four days later.

India has 900 million voters. Turnout in the first five phases averaged 67%, nearly the same as in 2014 elections that brought Modi to power.

Gandhi, who is president of the Congress party, cast his ballot Sunday in the capital, where he is registered as a voter. Gandhi, however, is contesting from two constituencies — family bastion Amethi in the north and Wayanad in the south — to project an all-India image. He will have to give up one seat if he wins in both places. 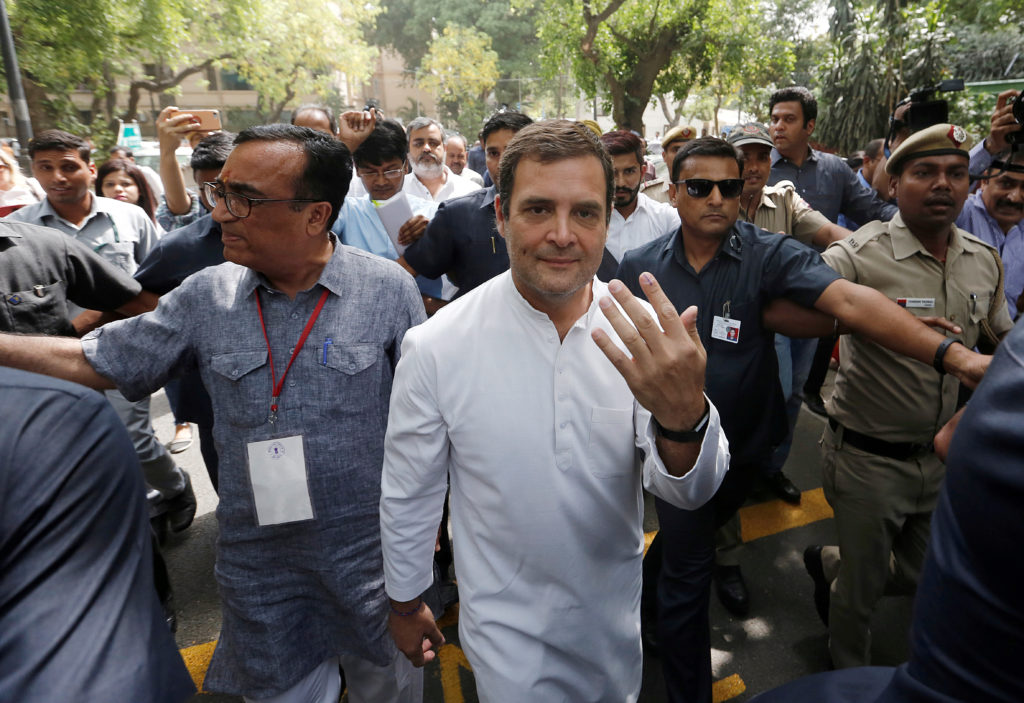 Rahul Gandhi, president of India’s main opposition Congress party, shows his ink-marked finger after casting his vote at a polling station in New Delhi, India, May 12, 2019. Photo by Adnan Abidi/Reuters

Saying it has been a good fight against Modi’s Bharatiya Janata Party, Gandhi told reporters, “Prime Minister Narendra Modi used hatred, we used love. It seems that love is going to win.”

The voting was largely peaceful but for stray incidents of violence in West Bengal state, where Modi’s BJP is trying to wrest seats from Trinamool Congress, a powerful regional party that is currently governing the state.

Dilip Ghosh, a BJP leader, told reporters that a party candidate, Bharati Ghosh, was prevented by rival groups from entering a voting station in the Keshpur area near Kolkata, the capital of West Bengal. She took refuge in a temple and later in a police station.

The Press Trust of India news agency said some people threw crude bombs and rocks at her motorcade when she tried to visit another polling station in the region. One of her security guards was injured and one vehicle was damaged. Security forces dispersed the attackers using wooden sticks, PTI said.

Opinion polls say that Modi’s BJP continues to be the front-runner in the election, but that it is likely to return with a lesser total of 282 seats. The BJP captured 31% of the votes in 2014, but it won more than half the seats to wrest power from the Congress party in a first-past-the-post electoral system in which a candidate who receives the most votes wins.

Modi is running his campaign like a presidential race, a referendum on his five years of rule with claims of helping the poorest with doles, free health care, providing toilets in their homes and helping women get free or cheap cooking gas cylinders.

At the same time, he is banking on stirring Hindu nationalism by accusing the Congress party of being soft on archrival Pakistan and terrorism, pandering to minority Muslims for votes and pampering Kashmiri separatists. 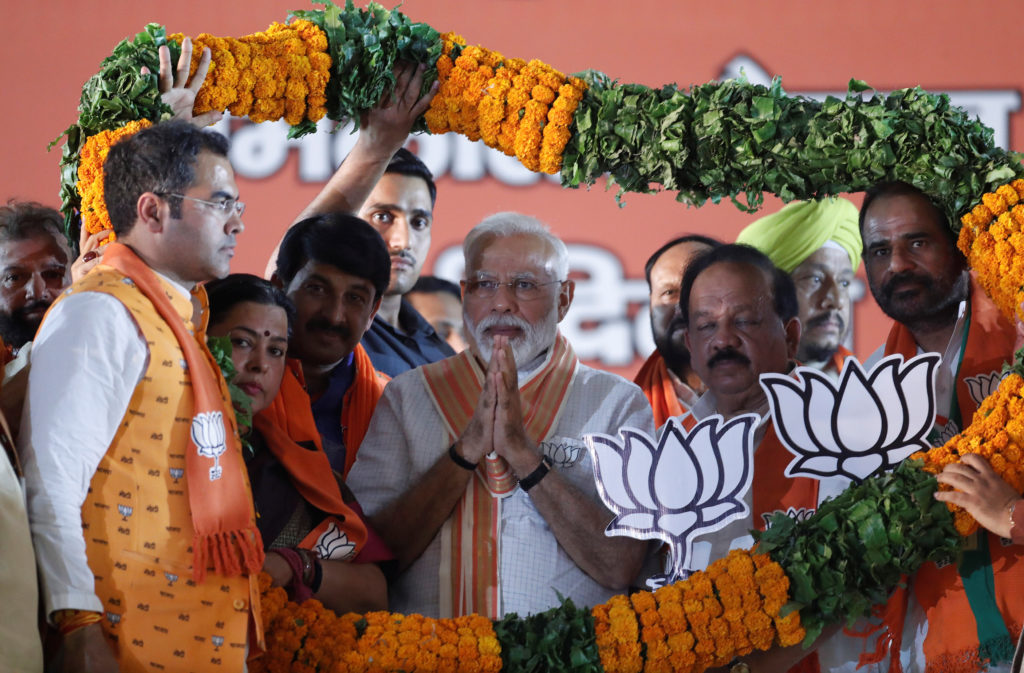 India’s Prime Minister Narendra Modi gestures as he is presented with a garland during an election campaign rally in New Delhi, India, May 8, 2019. Photo by Adnan Abidi/Reuters

Opposition parties accuse Modi of digressing from the main issues affecting nearly 70% of the population living in villages and small towns. The opposition is challenging him over India’s 6.1% unemployment rate — the highest in decades — and the economic difficulties of farmers hurt by low crop prices that led many to take their own lives. Opposition officials have also alleged corruption in a deal for India to purchase French fighter jets.

“Modi personally has been the most visible prime minister,” said Nilanjan Mukhopadhyay, a political commentator and biographer of Modi. But he added, “There could be an element of fatigue also. People at the end of it are looking at their bottom line. I think the issues of employment and rural distress are very important.”

Throughout the campaign, Modi has projected himself as a “chowkidar,” or watchman, guarding the country’s interests.

Gandhi, the 48-year-old scion of the Nehru-Gandhi family, has accused Modi of buying 36 French Rafale fighter jets at an exorbitant price, and helping a private industrialist by promoting him as an offset partner of Dassault, the aircraft manufacturer.

Women queue up at a polling booth at Ghevra village in North West Delhi. Most say they will vote where the male members of the family has asked them to #ElectionsWithTimes #2019Elections @TOIDelhi pic.twitter.com/Z5nEdns8y4

Gandhi adopted a rallying cry of “Chowkidar Chor Hai,” or “the watchman is a thief.”

Stung by the accusation, Modi accused Rajiv Gandhi, Rahul Gandhi’s late father and a former prime minister, of corruption — an apparent reference to the purchase by India of Swedish Bofors artillery guns in the 1980s. Rajiv Gandhi was accused of receiving kickbacks for the deal, but the allegation was never proved in court.

Modi also is unsparing in his criticism of Rahul Gandhi’s great-grandfather and India’s first prime minister, Jawaharlal Nehru, blaming him for the country’s border disputes with China and Pakistan and a lack of development while he was at the helm from 1947 to 1964.

He has challenged Modi to a public debate over the Rafale aircraft deal, but Modi has ignored the challenge.

Gandhi’s biggest political triumph since he joined politics 15 years ago was easily his party’s win in assembly elections in December, wrangling power away from Modi’s BJP in the states of Rajasthan, Madya Pradesh and Chhattisgarh.

The opposition has also accused Modi of following a pattern of antagonism against Muslims since his government came to power in 2014.

Modi has adopted a nationalist pitch in trying to win votes from the country’s Hindu majority by projecting a tough stance against Pakistan, India’s Muslim-majority neighbor.

Left: A woman casts her vote at a polling station during the sixth phase of the general election, in New Delhi, India, May 12, 2019. Photo by Anushree Fadnavis/Reuters