NEW DELHI — Protesters angered by India’s new citizenship law that excludes Muslims defied a ban against demonstrations on Sunday, as Prime Minister Narendra Modi used a rally for his Hindu nationalist party to defend the legislation, accusing the opposition of pushing the country into a “fear psychosis.”

Twenty-three people have been killed nationwide since the law was passed in Parliament earlier this month in protests that represent the first major roadblock for Modi’s Hindu nationalist agenda since his party’s landslide re-election last spring.

Most of the deaths have occurred in the northern state of Uttar Pradesh, where 20% of the state’s 200 million people are Muslim. Police, who deny any wrongdoing, said that among the 15 people killed in the state was an 8-year-old boy who died in a stampede in the city of Varanasi, the heart of Modi’s parliamentary constituency. Since last week, police in Uttar Pradesh have taken nearly 900 people into custody for engaging in violence.

Authorities across the country have scrambled to contain the situation, banning public gatherings under Section 144, a British colonial-era law, and blocking internet access. India’s Ministry of Information and Broadcasting issued an advisory Friday night asking broadcasters across the country to refrain from using content that could inflame further violence.

A group of politicians from the opposition Trinamool Congress party who traveled to Uttar Pradesh on Sunday to meet with families of those killed in the violence were not permitted to leave the airport runway, police said.

“We will not permit them because Section 144 is imposed in the area and it can make the atmosphere more tense,” said Uttar Pradesh’s police chief, O.P. Singh. 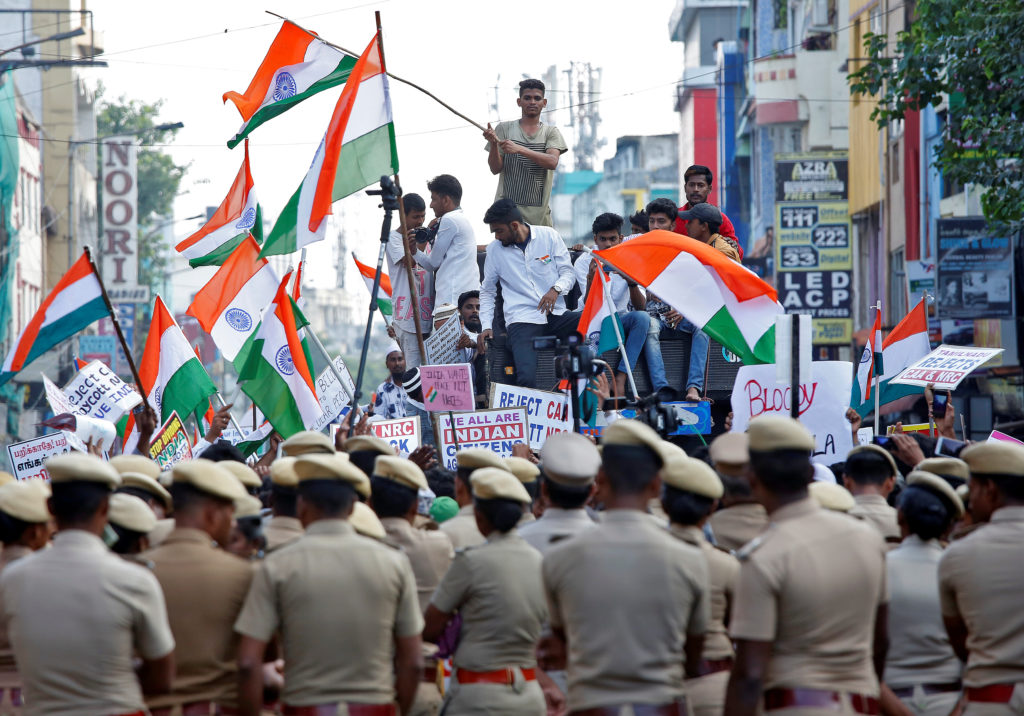 In the southern state of Tamil Nadu, about 500 Muslim and leftist activists protested, defying a ban on public gatherings there.

Modi took the stage at a rally in the capital launching his Bharatiya Janata Party’s campaign for New Delhi legislative assembly elections in February, and quickly turned to the contentious new law.

“People who are trying to spread lies and fear, look at my work. If you see any trace of divisiveness in my work, show it to the world,” he said.

Modi accused the main opposition Congress party of conspiring “to push not only New Delhi but other parts of the country into a fear psychosis.”

“They are trying every tactic to push me out of power,” he said, urging protesters to desist from attacks on police and other violence.

The new law allows Hindus, Christians and other religious minorities who are in India illegally to become citizens if they can show they were persecuted because of their religion in Muslim-majority Bangladesh, Pakistan and Afghanistan. It does not apply to Muslims.

Critics have slammed the legislation as a violation of India’s secular constitution and have called it the latest effort by Modi’s government to marginalize the country’s 200 million Muslims.

Protests against the law come amid an ongoing crackdown in Muslim-majority Kashmir, the restive Himalayan region stripped of its semi-autonomous status and demoted from a state into a federal territory in August.

The demonstrations also follow a contentious process in the northeastern state of Assam meant to weed out foreigners living in the country illegally. Nearly 2 million people, about half Hindu and half Muslim, were excluded from an official list of citizens — called the National Register of Citizens, or NRC — and have been asked to prove their citizenship or else be considered foreign.

India is building a detention center for some of the tens of thousands of people who the courts are expected to ultimately determine have entered illegally. Modi’s interior minister, Amit Shah, has pledged to roll out the process nationwide.

“First, we will bring the Citizenship Amendment Bill and will give citizenship to the Hindu, Buddhist, Sikh, Jain and Christian refugees, the religious minorities from the neighboring nations. Then, we will implement NRC to flush out the infiltrators from our country,” Shah said in an election speech last April.

On Sunday, Modi denied the existence of a detention center, accusing the Congress party of spreading fear that Indian Muslims would be jailed there.

Modi contradicted Shah, saying that there had been no discussion yet of whether to execute a nationwide citizens registry.

He also said that his opponents resented him for his work strengthening India’s ties to Iran, Saudi Arabia and other Islamic countries.

A small band of supporters of Modi’s party marched in New Delhi on Sunday. Activists from India’s northeast, a mainly tribal area where people fear an influx of migrants will dilute their culture and political sway, also held a rally in the capital.

The protests against the law began in Assam, the center of a decades-old movement against migrants, before spreading to predominantly Muslim universities and then nationwide.

“They understood what it was all about, and they have been very clear from the beginning that theirs was not an issue of Hindu versus Muslim or any religious identity,” said historian Mridula Mukherjee.

“They could see through this maneuver very quickly, and that’s why the mass upsurge started over there,” she said.

Left: Demonstrators attend a protest against a new citizenship law in India, outside the Jamia Millia Islamia university in New Delhi on December 22. Photo by Danish Siddiqui/Reuters