TEHRAN, Iran (AP) — Iran said Thursday it asked the International Monetary Fund for a $5 billion loan to fight the coronavirus, the first time since the 1979 Islamic Revolution that it has sought such assistance, in a staggering admission of how fragile its economy has become amid the epidemic and punishing U.S. sanctions.

Foreign Minister Mohammad Javad Zarif tweeted that the Washington-based IMF should “stand on right side of history & act responsibly” by releasing the funds. He also said the fight against the virus, which has infected more than 10,000 people in Iran and killed hundreds, has been “stymied by vast shortages caused by restrictions,” a reference to the U.S. sanctions.

Even before the virus struck, Iran’s economy was being battered by plunging oil prices and the sanctions imposed by President Donald Trump since May 2018 after he unilaterally withdrew the United States from the nuclear deal that Tehran struck with world powers.

Iran’s Central Bank chief Abdolnasser Hemmati said he asked for the $5 billion loan last week in a letter to IMF chief Kristalina Georgieva. She had said the IMF was prepared to make rapid support available to low-income countries through a $50 billion emergency fund that the group maintains to help nations facing an economic crisis.

IMF spokesman Gerry Rice confirmed it had received a loan request from Iran. He said the IMF is “proceeding expeditiously with all requests and in line with our policies.”

The last time a loan for Iran was approved from the IMF was under its final shah in 1960, well before the revolution that established clerical rule.

Zarif also demanded that the U.S. immediately halt what he called a “campaign of economic terrorism” and lift sanctions, saying in a letter to U.N. Secretary-General Antonio Guterres that Washington has made it increasingly difficult for Iran to export oil and virtually impossible to import medicine and medical equipment to treat those with the illness.

He said it is “unconscionable” that the U.S. government has not only increased its “maximum pressure” campaign “just as the virus has spread and is killing our most vulnerable citizens, but that it additionally has the audacity to lecture us on containing the coronavirus as it itself is evidently incapable of containing its onslaught.” 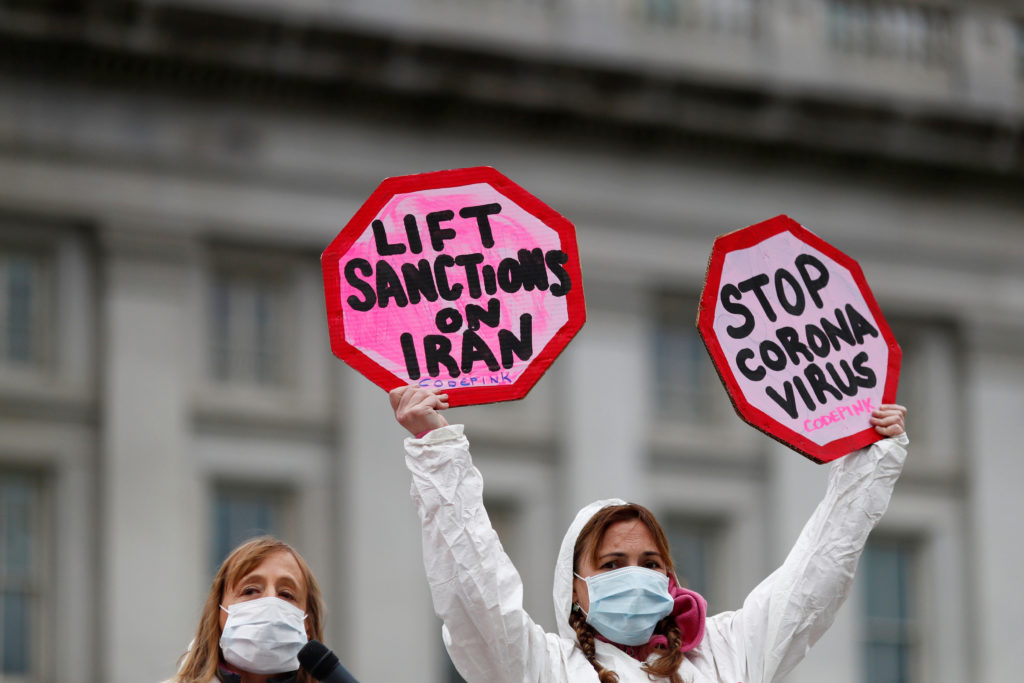 People attend a protest against the role that U.S. sanctions plays on Iran and the exacerbation of the coronavirus disease (COVID-19) worldwide, as the World Health Organization said for the first time on Wednesday that it now sees the coronavirus outbreak as a pandemic, in Washington, on March 11, 2020. Photo by REUTERS/Carlos Barria

Health Ministry spokesman Kianoush Jahanpour said 75 people had died in Iran in the past 24 hours from the coronavirus, pushing the death toll to 429. The number of Iranians with the COVID-19 disease was 10,075.

There are concerns that the number of infections is much higher than the confirmed cases reported by the government, with some Iranian lawmakers even speaking out.

The outbreak has not spared Iran’s top officials, with its senior vice president, Cabinet ministers, members of parliament, Revolutionary Guard members and Health Ministry officials among those infected.

Iran has suspended schools and banned spectators from stadiums, but religious shrines remain open and the markets and streets of the capital, Tehran, which has been hit hardest by the virus, are still crowded.

The head of Tehran’s task force for combating the virus, Ali Reza Zali, said most people in the capital are not treating the crisis seriously enough and many are not taking any preventive measures.

For most people, the coronavirus causes only mild or moderate symptoms, such as fever and cough. For some, especially older adults and people with existing health problems, it can cause more severe illness, including pneumonia. The vast majority of people recover from the new virus and the COVID-19 illness it causes.

Iran’s Supreme Leader Ayatollah Ali Khamenei on Thursday urged Gen. Mohammad Hossein Bagheri, chief of staff of the armed forces, to form a health and treatment task-force for the epidemic.

In the order, Khamenei said there was “some evidence suggest possibility of biological attack” through the virus, and he demanded that mobile hospitals and other facilities be set up by the armed forces. He did not elaborate on his reference to a biological attack.

The Revolutionary Guard also has trafficked in baseless conspiracy theories amid the outbreak, with its leader Gen. Hossein Salami falsely suggesting the U.S. created the virus amid the wider tensions with America.

President Hassan Rouhani’s government has faced criticism for not being out front on the response to the virus. U.S. Secretary of State Mike Pompeo has accused Iran and China, where the virus first appeared, of censorship and of trying to cover up the severity of its spread.

Saudi Arabia and Bahrain, both bitter rivals of Iran, have accused the country of being directly responsible for the rising infections in the region. Most cases in the Middle East outside Iran are linked to travelers from there. Saudi Arabia said its citizens’ passports were not stamped by Iran and so they evaded tougher screenings for the virus upon returning.

Countries have imposed varying levels of travel restrictions, from halting all commercial flights in Kuwait, to Saudi Arabia banning travel to 39 countries.

Regional stock markets were down at the close of the business week Thursday, reflecting investor concerns and nerves felt globally as oil prices plunge and tourism revenue is eroded by the virus.

Elsewhere in the region, confirmed cases in Israel rose to 100, alongside 31 cases in the West Bank and none reported in the Gaza Strip. Starting Thursday night, Israel will ban foreigners from entering the country unless they’re able to prove they can self-quarantine for two weeks.

At the Western Wall in Jerusalem, the holiest site where Jews can pray, authorities will limit entrance to an enclosed area and set up tents that each accommodate up to 100 people. They said there would be no restrictions on worship in the main plaza as it constitutes a “wide, open space.”

The Latin Patriarchate in Jerusalem urged churches to enforce the Health Ministry’s guidelines, including with Sunday services.

The Islamic endowment that oversees the Al-Aqsa mosque compound in Jerusalem, the third holiest site in Islam, said Friday prayers would be held as normal but encouraged people to pray in the outer courtyards and refrain from crowding in the mosques. It advised the elderly and sick not to enter mosques with large gatherings.

Saudi Arabia, which has 45 cases of the virus, said groups of more than 50 could not gather in public, potentially impacting how communal Friday prayers are held. The kingdom has already suspended pilgrimage to Islam’s holiest sites.

Kuwait closed all workplaces and nonessential business for two weeks, including restaurants, cafes and health clubs. Its stock market was closed for trading Thursday. Schools and universities have already been suspended. All commercial flights are being halted to Kuwait starting Friday. The country has over 70 confirmed cases of the virus.

Left: Workers in protective suits spray disinfectants near the gate of Shalamcha Border Crossing, after Iraq shut a border crossing to travellers between Iraq and Iran, on March 8, 2020. Photo by REUTERS/Essam al-Sudani