DUBAI, United Arab Emirates — Iran’s security forces deployed in large numbers across the capital on Sunday, expecting more protests after its Revolutionary Guard admitted to accidentally shooting down a passenger plane at a time of soaring tensions with the United States.

Riot police in black uniforms and helmets massed in Vali-e Asr Square, Tehran University and other landmarks as calls circulated for protests later in the day. Revolutionary Guard members patrolled the city on motorbikes and plainclothes security men were also out in force. People looked down as they walked briskly past the police, hoping not to draw attention to themselves.

The plane crash early Wednesday killed all 176 people on board, mostly Iranians and Iranian-Canadians. After initially pointing to a technical failure and insisting the armed forces were not to blame, authorities on Saturday finally admitted to accidentally shooting it down in the face of mounting evidence and accusations by Western leaders.

Iran downed the Ukrainian flight as it braced for retaliation after firing ballistic missiles at two bases in Iraq housing U.S. forces. The ballistic missile attack, which caused no casualties, was a response to the killing of Gen. Qassem Soleimani, Iran’s top general, in a U.S. airstrike in Baghdad. 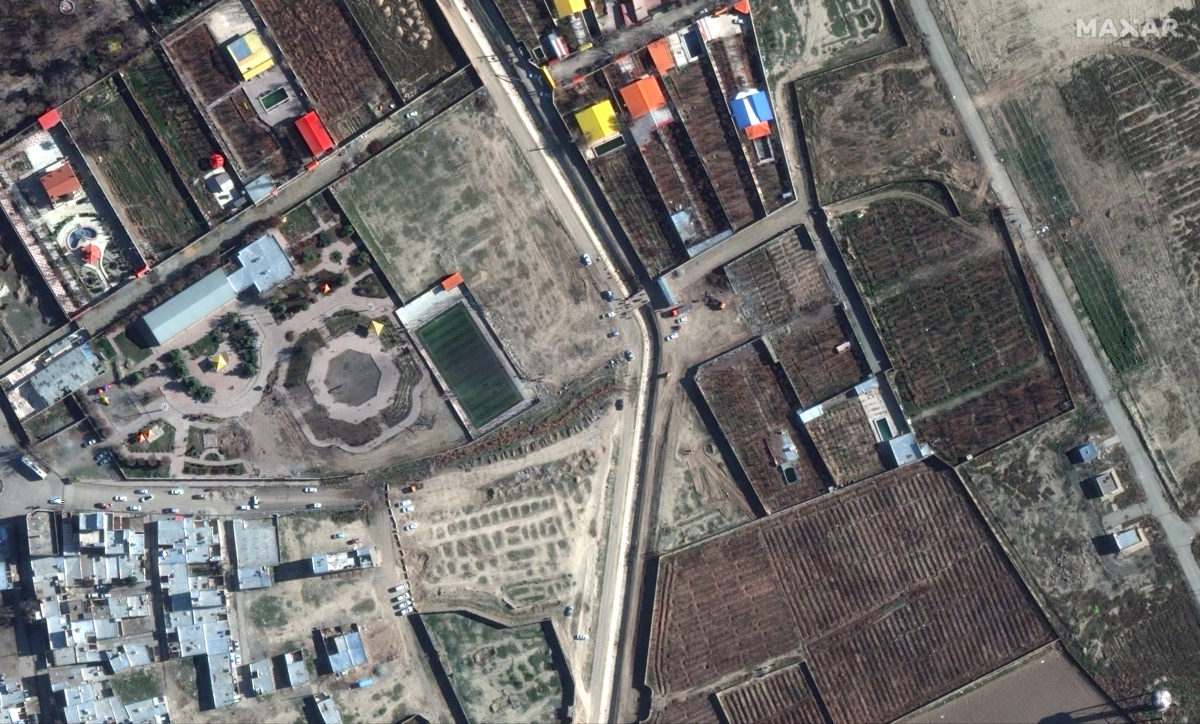 A view shows the area after the Boeing 737-800 plane, flight PS 752, crashed after take-off from Iran’s Imam Khomeini airport, on the outskirts of Tehran, in this handout Maxar’s WorldView-3 satellite image obtained January 11, 2020. Satellite image ©2020 Maxar Technologies/Handout via Reuters.

Iranians have expressed anger over the downing of the plane and the misleading explanations from senior officials in the wake of the tragedy. They are also mourning the dead, among whom were a large number of young people with promising futures who were studying abroad.

“Even talking about it makes my heart beat faster and makes me sad,” said Zahra Razeghi, a Tehran resident. “I feel ashamed when I think about their families.”

“The denial and covering up the truth over the past three days greatly added to the suffering and pain of the families, and me,” she added.

Another individual, who only identified himself as Saeed, said the largely state-run media had concealed the cause of the crash for “political reasons.”

“Later developments changed the game and they had to tell the truth,” he said.

Hundreds of students gathered at Tehran’s Shahid Beheshti University on Sunday to mourn the victims and protest against authorities for concealing the cause of the crash, the semi-official ISNA news agency reported. They later dispersed peacefully.

Bahareh Arvin, a reformist member of Tehran city council, took to social media to say she was resigning in protest at the government’s lies and corruption, saying that “with the current mechanism, there is no hope of reform.” A number of Iranian artists, including famed director Masoud Kimiai, withdrew from an upcoming international film festival. Two state TV hosts resigned in protest at the false reporting about the cause of the plane crash.

President Donald Trump, who has expressed support for past waves of anti-government demonstrations in Iran, addressed the country’s leaders in a tweet, saying “DO NOT KILL YOUR PROTESTERS.”

“The World is watching. More importantly, the USA is watching,” he tweeted.

Iranians took to the streets in November after the government hiked gas prices, holding large protests in several cities. The government shut down internet access for days, making it difficult to gauge the scale of the protests and the subsequent crackdown. Amnesty International later said more than 300 people were killed.

A candlelight ceremony late Saturday in Tehran turned into a protest, with hundreds of people chanting against the country’s leaders — including Supreme Leader Ayatollah Ali Khamenei — and police dispersing them with tear gas. Protests were also held in the city of Isfahan and elsewhere.

Police briefly detained the British ambassador to Iran, Rob Macaire, who said he went to the vigil without knowing it would turn into a protest.

“Can confirm I wasn’t taking part in any demonstrations!” he tweeted. “Went to an event advertised as a vigil for victims of #PS752 tragedy. Normal to want to pay respects — some of victims were British. I left after 5 mins, when some started chanting.”

He said he was arrested 30 minutes after leaving the area.

Britain said its envoy was detained “without grounds or explanation” and in “flagrant violation of international law.”

Iran’s Deputy Foreign Minister Abbas Araghchi later tweeted that Macaire was arrested “as an unknown foreigner in an illegal gathering.”

Araghchi said when police informed him that a man was arrested who claimed to be the British ambassador, he didn’t believe them. But he said that once he spoke to Macaire by phone he realized it was him, and that the ambassador was freed 15 minutes later.

Iran’s Foreign Ministry later summoned the British ambassador over his ”illegal and inappropriate presence” at the protest, it said on its Telegram channel.

Alaeddin Boroujerdi, a member of Iran’s parliamentary committee on national security and foreign policy, accused the ambassador of organizing protests and called for his expulsion. Dozens of hard-liners later gathered outside the British Embassy, chanting “Death to England” and calling for the ambassador to be expelled and for the closure of the embassy.

Iranian media meanwhile focused on the admission of responsibility for the crash, with several newspapers calling for those responsible to apologize and resign.

The hardline daily Vatan-e Emrouz bore the front-page headline, “A sky full of sadness,” while the Hamshahri daily went with “Shame,” and the IRAN daily said “Unforgivable.”

Mehdi Karroubi, an opposition activist under house arrest, lashed out at Khamenei himself, saying that as commander in chief he was “directly responsible.”

“If you were aware and you let military and security authorities deceive people, then there is no doubt you lack the attributes of constitutional leadership,” he said in a statement.

Criticism of the supreme leader is punishable by up to two years in prison.

Tensions with the United States eased after the ballistic missile attack, when Trump declined to respond and welcomed Iran’s apparent decision to stand down.

The emir of Qatar, Sheikh Tamim bin Hamad Al Thani, met with Iranian President Hassan Rouhani and other officials in Tehran on Sunday. Qatar has warm relations with the U.S. and Iran.

Syria’s Prime Minister Imad Khamis was also leading a high-level delegation to Iran, including the defense and foreign ministers. Syrian state media described it as an “important visit” in light of recent events, without elaborating. Iran is a key ally of Syrian President Bashar Assad in his country’s civil war, and Soleimani had mobilized militias and coordinated military aid.

Left: FILE PHOTO: A woman shouts slogans as she gathers with people to show their sympathy to the victims of the crash of the Boeing 737-800 plane, flight PS 752, in Tehran, Iran January 11, 2020. Photo by Nazanin Tabatabaee/WANA (West Asia News Agency) via Reuters.