Iran general steps out of Soleimani’s shadow to lead proxies

TEHRAN, Iran — A new Iranian general has stepped out of the shadows to lead the country’s expeditionary Quds Force, becoming responsible for Tehran’s proxies across the Mideast as the Islamic Republic threatens the U.S. with “harsh revenge” for killing its previous head, Qassem Soleimani.

The Quds Force is part of the 125,000-strong Revolutionary Guard, a paramilitary organization that answers only to Iran’s Supreme Leader Ayatollah Ali Khamenei. The Guard oversees Iran’s ballistic missile program, has its naval forces shadow the U.S. Navy in the Persian Gulf and includes an all-volunteer Basij force.

Like his predecessor, a young Esmail Ghaani faced the carnage of Iran’s eight-year war with Iraq in the 1980s and later joined the newly founded Quds, or Jerusalem, Force.

While much still remains unknown about Ghaani, 62, Western sanctions suggest he’s long been in a position of power in the organization. And likely one of his first duties will be to oversee whatever revenge Iran intends to seek for the U.S. airstrike early Friday that killed his longtime friend Soleimani.

“We are children of war,” Ghaani once said of his relationship with Soleimani, according to Iran’s state-run IRNA news agency. “We are comrades on the battlefield and we have become friends in battle.”

The Guard has seen its influence grow ever-stronger both militarily and politically in recent decades. Iran’s conventional military was decimated by the execution of its old officer class during the 1979 Islamic Revolution and later by sanctions.

A key driver of that influence comes from the elite Quds Force, which works across the region with allied groups to offer an asymmetrical threat to counter the advanced weaponry wielded by the U.S. and its regional allies. Those partners include Iraqi militiamen, Lebanon’s Hezbollah and Yemen’s Houthi rebels.

In announcing Ghaani as Soleimani’s replacement, Ayatollah Ali Khamenei called the new leader “one of the most prominent commanders” in service to Iran.

The Quds Force “will be unchanged from the time of his predecessor,” Khamenei said, according to IRNA.

Soleimani long has been the face of the Quds Force. His fame surged after American officials began blaming him for deadly roadside bombs targeting U.S. troops in Iraq. Images of him, long a feature of hard-line Instagram accounts and mobile phone lockscreens, now plaster billboards calling for Iran to avenge his death.

But while Soleimani’s exploits in Iraq and Syria launched a thousand analyses, Ghaani has remained much more in the shadows of the organization. He has only occasionally come up in the Western or even Iranian media. But his personal story broadly mirrors that of Soleimani.

Born on Aug. 8, 1957 in the northeastern Iranian city of Mashhad, Ghaani grew up during the last decade of monarchy. He joined the Guard a year after the 1979 revolution. Like Soleimani, he first deployed to put down the Kurdish uprising in Iran that followed the shah’s downfall.

Iraq then invaded Iran, launching an eight-year war that would see 1 million people killed. Many of the dead were lightly armed members of the Guard, some of whom were young boys killed in human-wave assaults on Iraqi positions.

Volunteers “were seeing that all of them are being killed, but when we ordered them to go, would not hesitate,” Ghaani later recounted. “The commander is looking to his soldiers as his children, and in the soldier’s point of view, it seems that he received an order from God and he must to do that.”

He survived the war to join the Quds Force shortly after its creation. He worked with Soleimani, as well as led counterintelligence efforts at the Guard. Western analysts believe while Soleimani focused on nations to Iran’s west, Ghaani’s remit was those to the east like Afghanistan and Pakistan. However, Iranian state media has not elaborated on his time in the Guard.

In 2012, the U.S. Treasury sanctioned Ghaani, describing him as having authority over “financial disbursements” to proxies affiliated with the Quds Force. The sanctions particularly tied Ghaani to an intercepted shipment of weapons seized at a port in 2010 in Nigeria’s most-populous city, Lagos. 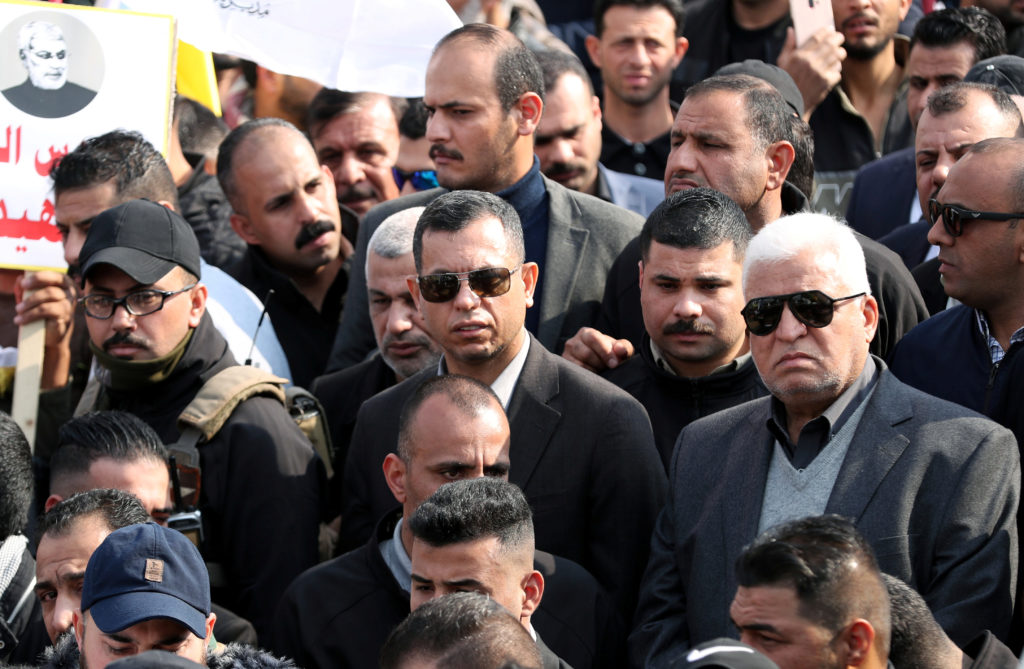 Head of the Popular Mobilization forces Faleh al-Fayyad (R) attends the funeral of the Iranian Major-General Qassem Soleimani, head of the elite Quds Force of the Revolutionary Guards, and the Iraqi militia commander Abu Mahdi al-Muhandis, who were killed in an air strike at Baghdad airport, in Baghdad, Iraq, January 4, 2020. Photo by Thaier al-Sudani/Reuters.

Authorities broke into 13 shipping containers labeled as carrying “packages of glass wool and pallets of stone.” They instead found 107 mm Katyusha rockets, rifle rounds and other weapons. The Katyusha remains a favored weapon of Iranian proxy forces, including Iraqi militias and the Lebanese militant group Hezbollah.

An Iranian and his Nigerian partner later received five-year prison sentences over the shipment, which appeared bound for Gambia, then under the rule of dictator Yahya Jammeh. Israeli officials had claimed the rockets would be shipped to militants in the Gaza Strip, while Nigerian authorities alleged that local politicians could use the arms in upcoming elections.

Also in 2012, Ghaani drew criticism from the U.S. State Department after reportedly saying that “if the Islamic Republic was not present in Syria, the massacre of people would have happened on a much larger scale.” That comment came just after gunmen backing Syrian President Bashar Assad killed over 100 people in Houla in the country’s Homs province.

“Over the weekend we had the deputy head of the Quds Force saying publicly that they were proud of the role that they had played in training and assisting the Syrian forces — and look what this has wrought,” then-State Department spokeswoman Victoria Nuland said at the time.

In January 2015, Ghaani indirectly said that Iran sends missiles and weapons to Palestinians to fight Israel.

“The U.S. and Israel are too small to consider themselves in line with Iran’s military power,” Ghaani said at the time. “This power has now appeared alongside the oppressed people of Palestine and Gaza in the form of missiles and weapons.”

Now, Ghaani is firmly in control of the Quds Force. While Iran’s leaders say they have a plan to avenge Soleimani’s death, no plan has been announced as the country prepares for funerals for the general starting Sunday.

Whatever that plan is, Ghaani likely will be involved.

“If there were no Islamic Republic, the U.S. would have burned the whole region,” Ghaani once said.