Iranian tanker to leave Gibraltar soon despite US pressure

GIBRALTAR — The shipping agent for an Iranian supertanker caught in a diplomatic standoff says the vessel is ready to depart Gibraltar on Sunday or Monday, as the U.S. made a last-minute effort to seize it again.

The head of the company sorting paperwork and procuring for the Grace 1 oil tanker in the British overseas territory said the vessel could be sailing away in the next “24 to 48 hours,” once new crews dispatched to the territory take over command of the ship.

“The vessel is ongoing some logistical changes and requirements that have delayed the departure,” Astralship managing director Richard De la Rosa told The Associated Press.

De la Rosa’s comments came a day after the U.S. obtained a warrant to seize the vessel over violations of U.S. sanctions on Iran. It was unclear if that could happen within a 24-hour time frame as Gibraltar officials have said any request to seize the vessel would have to make its way through the territory’s courts.

He said the new crews were Indian and Ukrainian nationals hired by the Indian managers of the ship and that his company had not been informed about the supertanker’s next destination.

The tanker, which carries 2.1 million barrels of Iranian light crude oil, had been detained for over a month in Gibraltar for allegedly attempting to breach European Union sanctions on Syria. The arrest fueled tension between London and Tehran, which seized a British-flagged tanker in the Strait of Hormuz in apparent retaliation.

Analysts had said the release of the Grace 1 by Gibraltar could see Britain’s Stena Impero go free.

But late on Friday, a day after the tanker was released from detention, the U.S. obtained a warrant to seize the vessel over violations of U.S. sanctions, money laundering and terrorism statutes. Washington is seeking to take control of the oil tanker, all of the petroleum aboard and $995,000, unsealed court documents showed.

The latest turn of events come as tensions continue to rise in the Persian Gulf since President Donald Trump last year unilaterally pulled the U.S. out of the 2015 nuclear deal signed by Iran and other world powers. In recent weeks, oil tankers in the region have been the subject of attacks and seizures, dragging among others London and Tehran into a bitter diplomatic row.

The Gibraltar Supreme Court didn’t immediately respond to requests for comment on whether the U.S. request had been filed there. Britain’s Foreign Office deferred questions to the government of Gibraltar, but calls and emails to its offices on how authorities planned to respond to Washington’s move went unanswered.

Messages left with the U.S. Embassy in London were not immediately returned.

The chief minister of Gibraltar, Fabian Picardo, had warned the U.S. that a new legal case would need to be examined by the territory’s courts following the end of the tanker’s detention this week. Picardo said he had been assured in writing by the Iranian government that the tanker wouldn’t unload its cargo in Syria. 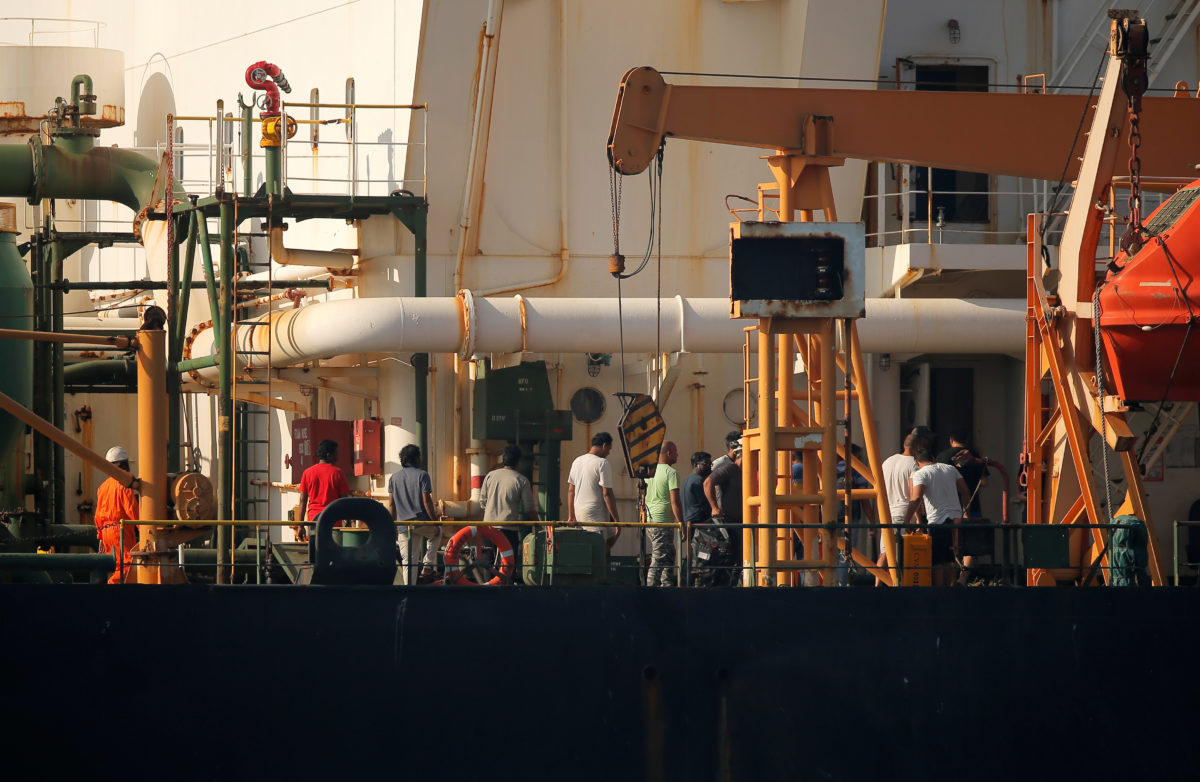 Crew members are pictured as Iranian oil tanker Grace 1 sits anchored awaiting a court ruling on whether it can be freed after it was seized in July by British Royal Marines off the coast of the British Mediterranean territory, in the Strait of Gibraltar, southern Spain, August 15, 2019. Photo by Jon Nazca/Reuters

Richard Wilkinson, a lawyer representing three crew members of the Grace 1 oil tanker, including its Indian captain, said he was “not aware of any reason why the ship won’t sail on Sunday, as it is to be planned.”

“As far as Europe is concerned, and it’s common ground, there’s been no criticism or complaints that this vessel is carrying oil from Iran, the only problem from the European point of view was the destination of the vessel and that has been sorted,” Wilkinson said.

He also said that he doubted that the U.S. had any jurisdiction to enforce its own sanctions in Gibraltar, where he saw “little political will” to re-seize the tanker.

The time window for a new seizure was also rapidly closing, as workers were seen by an AP crew hanging on a ladder to repaint the vessel’s bow with the name “Adrian Darya 1” over the place where “Grace 1” had already been blackened out.

The ship was reportedly no longer sailing under a Panamanian flag, but no signs of a new one could be seen on Saturday.

The shipping agent, De la Rosa, said that “if the Americans came forth with some kind of request or specific order, it would have to be looked into by the judges, but I don’t think that’s materialized.”

Sanam Vakil, a senior research fellow at Chatham House, said the Iran policies of the U.K. and the U.S. governments overlapped in some aspects but differed on the 2015 nuclear deal, which London wants to maintain despite the Trump administration’s efforts to scrap it.

The British, Vakil said, “think it’s de-escalation that’s going to result in the release of the Stena Impero and preserve the Joint Comprehensive Plan of Action,” as the nuclear deal is officially known.

“The Americans are trying to provoke Iran,” she added. “If they do manage to seize the ship, it’s all about provoking the Islamic Republic. They’re trying to create a new cycle of tensions.”

Left: The name of Iranian oil tanker Grace 1 is seen removed as it sits anchored after the Supreme Court of the British territory lifted its detention order, in the Strait of Gibraltar, southern Spain, August 16, 2019. Photo by Jon Nazca/Reuters