DUBAI, United Arab Emirates — Iran’s supreme leader on Sunday cautiously backed the government’s decision to raise gasoline prices by 50% after days of widespread protests, calling those who attacked public property during demonstrations “thugs” and signaling that a potential crackdown loomed.

The government shut down internet access across the nation of 80 million people to staunch demonstrations that took place in a reported 100 cities and towns. That made it increasingly difficult to gauge whether unrest continued. Images published by state and semiofficial media showed the scale of the damage in images of burned gas stations and banks, torched vehicles and roadways littered with debris.

Since the price hike, demonstrators have abandoned cars along major highways and joined mass protests in the capital, Tehran, and elsewhere. Some protests turned violent, with demonstrators setting fires as gunfire rang out.

It remains to be seen how many people were arrested, injured or killed. Videos from the protests have shown people gravely wounded. 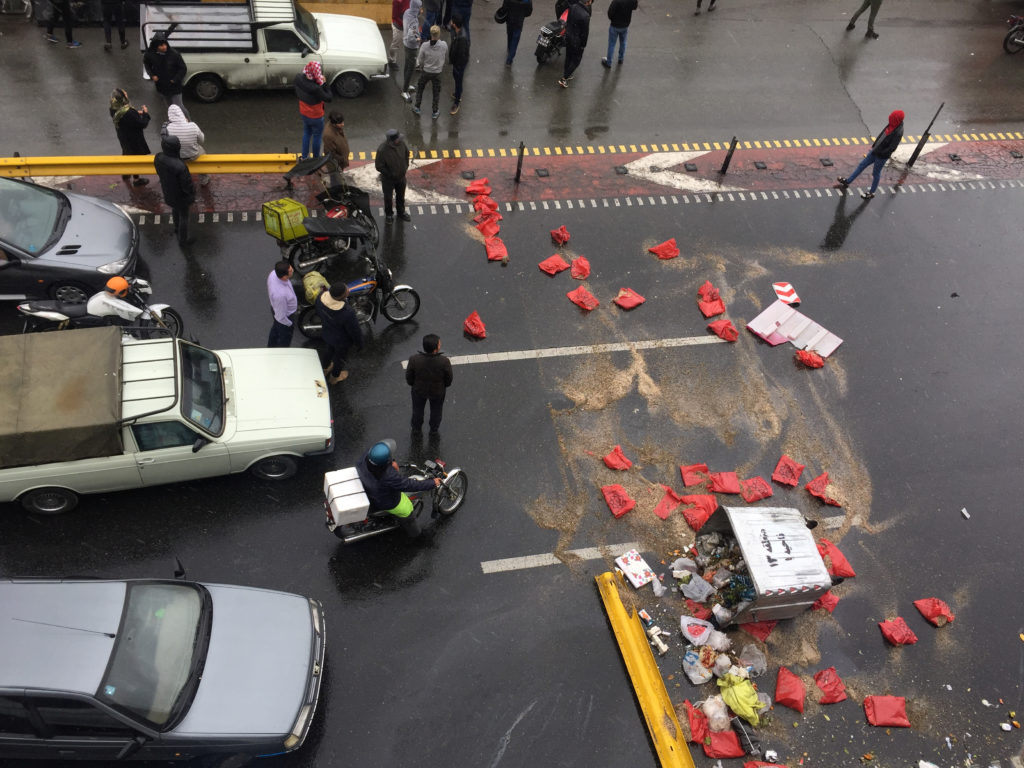 Iranian authorities on Sunday raised the official death toll in the violence to at least three. Attackers targeting a police station in the western city of Kermanshah on Saturday killed an officer, the state-run IRNA news agency reported Sunday. A lawmaker said another person was killed in a suburb of Tehran. Earlier, one man was reported killed Friday in Sirjan, a city some 800 kilometers (500 miles) southeast of Tehran.

In an address aired Sunday by state television, Ayatollah Ali Khamenei said “some lost their lives and some places were destroyed,” without elaborating. He called the protesters “thugs” who had been pushed into violence by counterrevolutionaries and foreign enemies of Iran.

Khamenei specifically named those aligned with the family of Iran’s late shah, ousted 40 years ago, and an exile group called the Mujahedeen-e-Khalq. The MEK calls for the overthrow of Iran’s government and enjoys the support of President Donald Trump’s personal lawyer, Rudy Giuliani.

“Setting a bank on fire is not an act done by the people. This is what thugs do,” Khamenei said.

The supreme leader carefully backed the decision of Iran’s relatively moderate President Hassan Rouhani and others to raise gasoline prices. While Khamenei dictates the country’s nuclear policy amid tensions with the U.S. over its unraveling 2015 accord with world powers, he made a point to say he wasn’t an “expert” on the gasoline subsidies.

Khamenei ordered security forces “to implement their tasks” and for Iran’s citizens to keep clear of violent demonstrators. Iran’s Intelligence Ministry said the “key perpetrators of the past two days’ riot have been identified and proper action is ongoing.”

That seemed to indicate a crackdown could be looming. Economic protests in late 2017 into 2018, as well as those surrounding its disputed 2009 presidential election, were met with a heavy reaction by the police and the Basij, the all-volunteer force of Iran’s paramilitary Revolutionary Guard.

The semiofficial Fars news agency, close to the Guard, put the total number of protesters at over 87,000, saying demonstrators ransacked some 100 banks and stores in the country. Authorities arrested some 1,000 people, Fars reported, citing unnamed security officials for the information.

The protests have put renewed pressure on Iran’s government as it struggles to overcome the U.S. sanctions that have strangled the economy since Trump unilaterally withdrew America from the nuclear deal over a year ago.

While representing a political risk for Rouhani ahead of February parliamentary elections, the demonstrations also show widespread anger among the Iranian people, who have seen their savings evaporate amid scarce jobs and the collapse of the national currency, the rial. 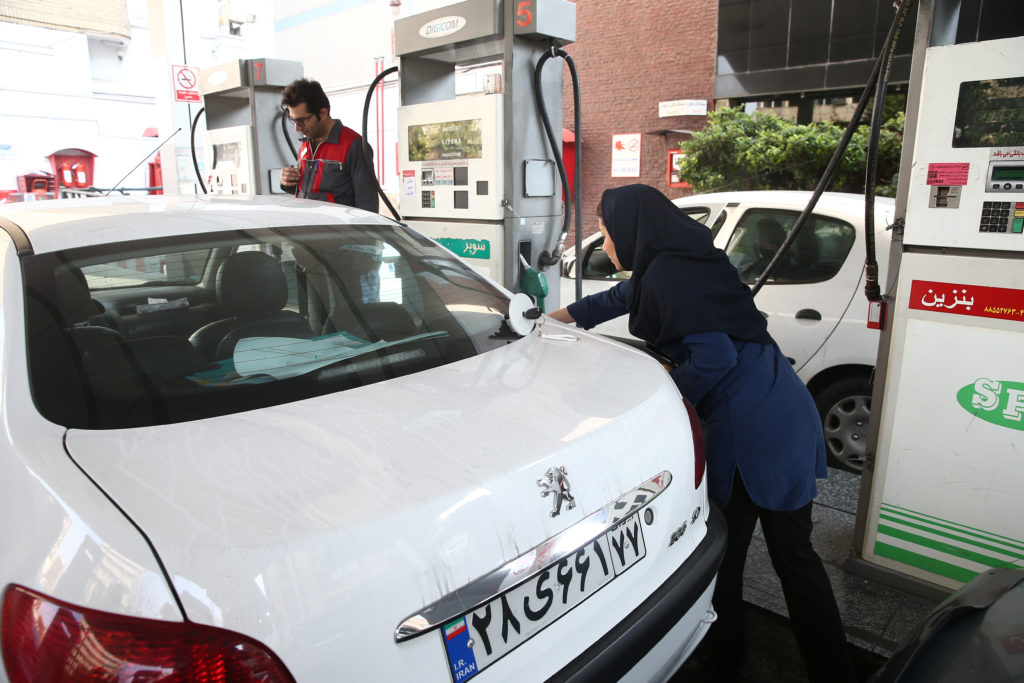 A women fills up her car’s tank at a petrol station, after fuel price increased in Tehran, Iran November 15, 2019. photo by Nazanin Tabatabaee/WANA (West Asia News Agency) via Reuters.

Cheap gasoline is practically considered a birthright in Iran, home to the world’s fourth-largest crude oil reserves despite decades of economic woes since its 1979 Islamic Revolution. Gasoline in the country remains among the cheapest in the world, with the new prices jumping 50% to a minimum of 15,000 rials per liter. That’s 13 cents a liter, or about 50 cents a gallon. A gallon of regular gasoline in the U.S. costs $2.60 by comparison.

Iranian internet access saw disruptions and outages Friday night into Saturday, according to the group NetBlocks, which monitors worldwide internet access. By Saturday night, connectivity had fallen to just 7% of ordinary levels. It was mostly unchanged on Sunday.

NetBlocks called it the most severe shutdown the group had tracked in any country “in terms of its technical complexity and breadth.” On Twitter, NetBlocks said the disruption constituted “a severe violation” of Iranians’ “basic rights and liberties.”

The internet firm Oracle called it “the largest internet shutdown ever observed in Iran.”

In a statement issued Sunday, the Trump administration condemned “the lethal force and severe communications restrictions used against demonstrators.”

“Tehran has fanatically pursued nuclear weapons and missile programs, and supported terrorism, turning a proud nation into another cautionary tale of what happens when a ruling class abandons its people and embarks on a crusade for personal power and riches,” the White House statement said.

In Dubai, the new U.S. ambassador to the United Arab Emirates told The Associated Press that America was “not advocating regime change. We are going to let the Iranian people decide for themselves their future.”

“They are frustrated. They want freedom,” Ambassador John Rakolta said at the Dubai Airshow. “These developments that you see right now are their own people telling them, ‘We need change and to sit down with the American government.’”