BAGHDAD — Three anti-government protesters were shot dead and at least 58 others wounded in Baghdad and southern Iraq on Saturday, security and medical officials said, as Prime Minister Adel Abdul-Mahdi formally submitted his resignation to parliament.

Lawmakers were expected to either vote or accept outright Abdul-Mahdi’s resignation letter in a parliamentary session Sunday, two members of parliament said.

The prime minister announced Friday he would hand parliament his resignation amid mounting pressure from mass anti-government protests, a day after more than 40 demonstrators were killed by security forces in Baghdad and southern Iraq. The announcement also came after Iraq’s top Shiite cleric withdrew his support for the government in a weekly sermon.

The formal resignation came after an emergency Cabinet session earlier in which ministers approved the document and the resignation of key staffers, including Abdul-Mahdi’s chief of staff.

In a pre-recorded speech, Abdul-Mahdi addressed Iraqis, saying that following parliament’s recognition of his stepping down, the Cabinet would be demoted to caretaker status, unable to pass new laws and make key decisions.

Existing laws do not provide clear procedures for members of parliament to recognize Abdul-Mahdi’s resignation, Iraqi officials and experts said. Cabinet bylaws allow the prime minister to tender his resignation to the president, but there is no specific law that dictates the course of action should this be tasked to parliament.

“There is a black hole in the constitution, it says nothing about resignation,” said lawmaker Mohamed al-Daraji. 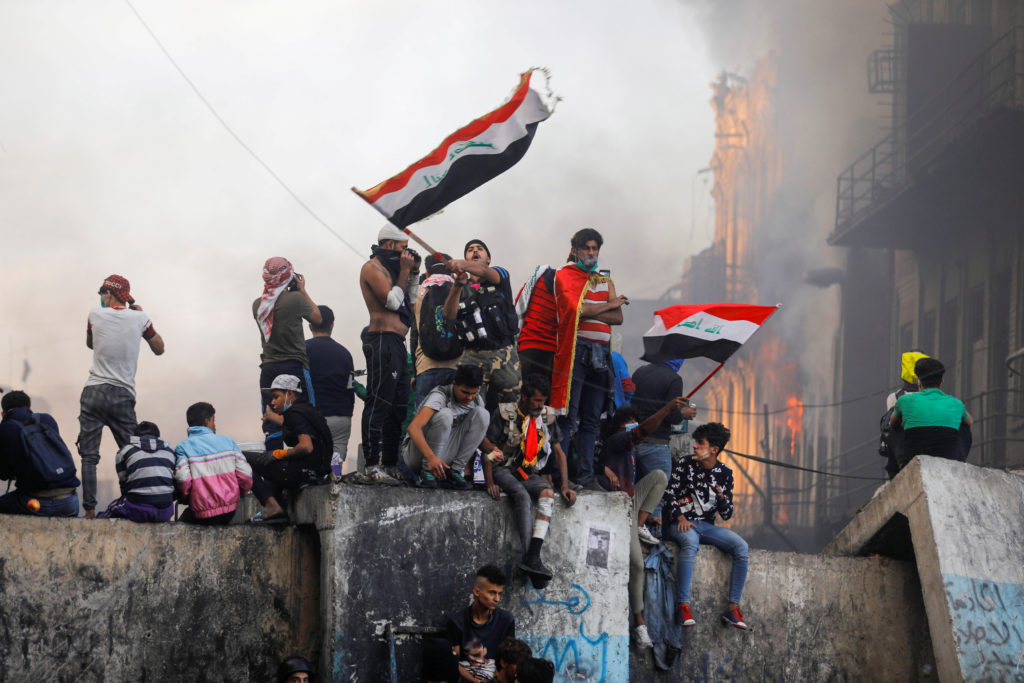 There are two main laws that could direct parliament’s course of action, he added: Either they vote Abdul-Mahdi out in a vote of no-confidence, per Article 61 of the constitution, or resort to Article 81 reserved for times of crisis when there is a vacancy in the premiership, shifting those duties temporarily to the president.

“My understanding is this will be taken care of per Article 61,” he said.

A vote of no confidence would demote Abdul-Mahdi’s Cabinet into caretaker status for a period of 30 days, in which parliament’s largest political bloc would have to propose a new candidate.

This is where the real problem comes in, experts and officials said.

Abdul-Mahdi’s nomination as prime minister was the product of a provisional alliance between parliament’s two main blocs — Sairoon, led by cleric Moqtada al-Sadr, and Fatah, which includes leaders associated with the paramilitary Popular Mobilization Units headed by Hadi al-Amiri.

In the May 2018 election, neither coalition won a commanding plurality that would have enabled it to name the premier alone. To avoid political crisis, Sairoon and Fatah forged a precarious union.

“Now we are back to the question of who is the largest bloc that can name the next prime minister,” said one official close to the State of Law party, led by former Prime Minister Nouri al-Maliki. The official spoke on condition of anonymity in line with regulations. “If they don’t come to an agreement before the 30-day deadline, then we might have to go to the supreme court.”

Officials traded theories as to why Abdul-Mahdi chose to tender his resignation through parliament, with some speculating it was to buy more time or avoid the risk of a vacuum should the post remain empty.

Abdul-Mahdi had alluded to the challenges faced by political parties to find consensus candidates, saying in earlier statements he would step down once an alternative candidate was found.

In his speech, addressing these speculations, Abdul-Mahdi said he was acting on the advice of Iraq’s chief Supreme Court judge.

“The perspective I received from the chief of the federal supreme court is that the resignation should be submitted to those who voted the government in,” he said.

Abdul-Mahdi listed his government’s accomplishments, saying it had come to power during difficult times. “Not many people were optimistic that this government would move forward,” he said.

The government, he said, had managed to push through important job-creating projects, improve electricity generation and strengthen ties with neighboring countries.

“But unfortunately, these events took place,” he said, referring to the mass protest movement that engulfed Iraq on Oct. 1. “We need to be fair to our people and listen to them, where we made mistakes, where we did not make up for the mistakes of previous governments.”

At least 400 people have died since the leaderless uprising shook Iraq with thousands of Iraqis taking to the streets in Baghdad and the predominantly Shiite southern Iraq decrying corruption, poor services, lack of jobs and calling for an end to the post-2003 political system.

Three protesters were killed and 24 wounded in the holy city of Najaf in southern Iraq on Saturday as security forces used live rounds to disperse them from a key mosque, security and hospital officials said.

In Baghdad, at least 11 protesters were wounded near the strategic Ahrar Bridge when security forces fired live ammunition and tear gas to prevent demonstrators from removing barricades. The protesters are occupying part of three strategic bridges – Ahrar, Sinak and Jumhuriya – in a stand-off with security forces. All three lead to the heavily fortified Green Zone, the seat of Iraq’s government.

In the southern city of Nasiriyah, security forces used live fire and tear gas to repel protesters on two main bridges, the Zaitoun and the Nasr, which lead to the city center. Heavy fighting has taken place in Nasiriyah in recent days, with at least 31 protesters killed.

The officials spoke on condition of anonymity in line with regulations.

Abdul-Mahdi referred to the rising death toll by security forces in his speech.

“We did our best to stop the bloodshed, and at the time we made brave decisions to stop using live ammunition, but unfortunately when clashes happen there will be consequences,” he said.