Iraq vote, Hezbollah threat leveled at US troops in Mideast

The U.S. military presence in the Middle East was thrown into jeopardy Sunday, as Iraq’s parliament voted to expel U.S. troops from their country while the leader of Lebanon’s Hezbollah group said the U.S. military across the region “will pay the price” for killing a top Iranian general.

Hassan Nasrallah said that U.S. bases, warships and soldiers in the Middle East were all fair targets after the U.S. drone strike that killed Gen. Qassem Soleimani, the architect of many of Iran’s regional military campaigns in recent years.

The two developments were new signs of the backlash from Friday’s killing of Soleimani and a number of top Iraqi officials at the Baghdad airport, and further heightened tensions in a region already on high alert and bracing for an Iranian retaliation.

Later Sunday, at least three explosions shook the Iraqi capital and sirens sounded across the Tigris River. The blasts appeared to be mortars or rockets that landed inside the heavily fortified Green Zone where the U.S. and other embassies are based, as well as the seat of Iraq’s government. There was no immediate word on casualties. It was the second such attack in two days.

“The suicide attackers who forced the Americans to leave from our region in the past are still here and their numbers have increased,” said Nasrallah. It was not clear which suicide bombings Nasrallah was referring to. But a 1983 attack on a U.S. Marine barracks in Beirut, Lebanon, killed 241 U.S. servicemen and led President Ronald Reagan to withdraw all American forces from the country. 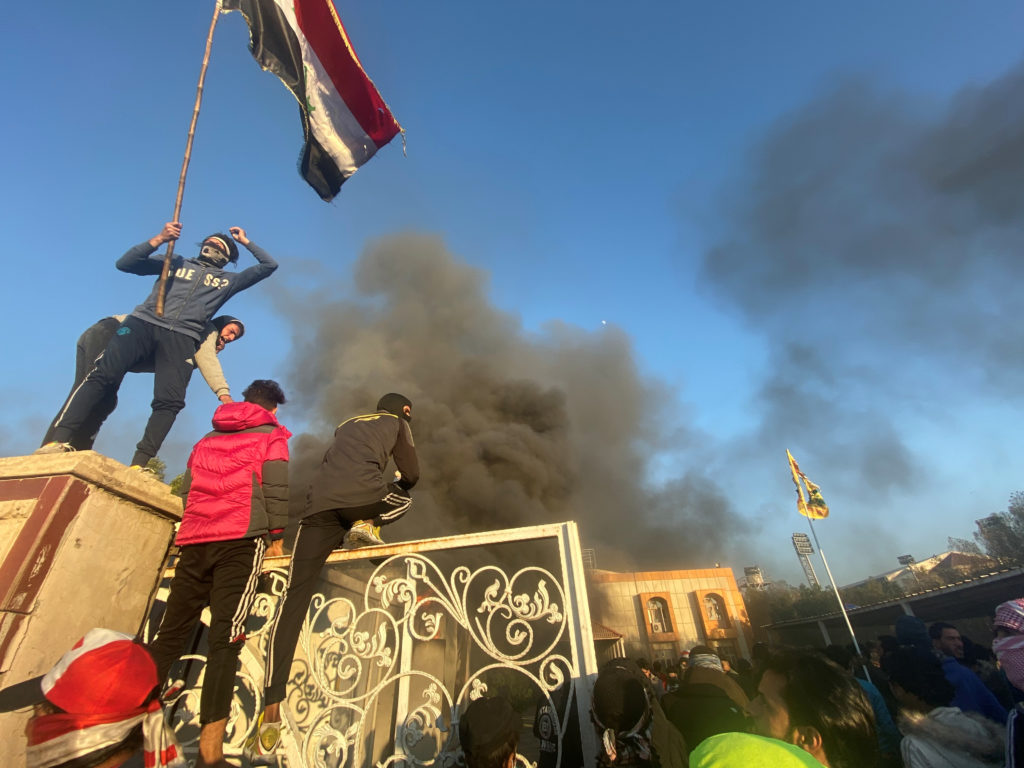 A headquarters building of Popular Mobilization Forces (Hashd al-Shaabi) burns after being torched by demonstrators during ongoing anti-government protests, in Nassiriya, Iraq January 5, 2020. Photo via Reuters.

“When American troops return in coffins, when they come vertically and return horizontally to the United States of America, then Trump and his administration will know that they lost the region and will lose the elections,” Nasrallah said. He added that U.S. civilians in the region should not be targeted, because attacking them would play into President Donald Trump’s hands.

Nasrallah spoke from an undisclosed location, and his speech was played on large screens for thousands of Shiite followers in southern Beirut, interrupted by chants of “Death to America!” The comments were Nasrallah’s first since Soleimani’s killing.

The stark warning by Nasrallah came as Iraq’s parliament voted in favor of a nonbinding resolution calling for the expulsion of U.S. troops from their country in a move that that could pave the way for a resurgence of the Islamic State group.

Amid threats of vengeance from Iran, the U.S.-led military coalition in Iraq said Sunday it is putting the battle against IS militants on hold to focus on protecting its own troops and bases.

In a strong speech before lawmakers in Iraq’s parliament, Prime Minister Adel Abdul-Mahdi said that after the killing of Soleimani, the government has two choices: End the presence of foreign troops in Iraq or restrict their mission to training Iraqi forces. He called for “urgent measures” to remove foreign forces — including the estimated 5,200 U.S. troops.

Asked shortly before the parliamentary vote whether the U.S. would comply with an Iraqi government request for American troops to leave, U.S. Secretary of State Mike Pompeo would not answer directly, saying the U.S. was watching the situation.

But the added: “It is the United States that is prepared to help the Iraqi people get what it is they deserve and continue our mission there to take down terrorism from ISIS and others in the region,” using an alternative acronym for the Islamic State.

Abdul-Mahdi resigned last year in response to the anti-government protests that have engulfed Baghdad and the mostly Shiite southern provinces. Political factions have been unable to agree on a new prime minister, and Abdul-Mahdi continues in a caretaker capacity. Experts said such a government is not legally authorized to sign such a law.

American forces withdrew from Iraq in 2011 but returned in 2014 at the invitation of the government to help battle IS after it seized vast areas in the north and west of the country, including Iraq’s second-largest city, Mosul. A U.S.-led coalition provided crucial air support as Iraqi forces, including Iran-backed militias, regrouped and drove IS out in a costly three-year campaign.

A pullout of U.S. troops could could cripple the fight against the Islamic State and allow it to make a comeback. Militants affiliated with IS routinely carry out attacks in northern and western Iraq, hiding out in rugged desert and mountainous areas. Iraqi forces rely on the U.S. for logistics and weapons.

An American withdrawal could also enable Iran to deepen its influence in Iraq, a majority Shiiite country like Iran.

U.S. Sen. Lindsey Graham, a member of the Senate Foreign Relations Committee, said on Fox News that the parliamentary vote is “a bit concerning.”

“The Iranian government is trying to basically take over Iraq’s political system. Iran is bribing Iraqi politicians. To the Iraqi people, do not allow your politicians to turn Iraq into a proxy of Iran,” the South Carolina Republican said.

The majority of about 180 legislators present in Parliament voted in favor of the troop-removal resolution. It was backed by most Shiite members of Parliament, who hold a majority of seats. Many Sunni and Kurdish legislators did not show up for the session, apparently because they oppose abolishing the deal.

Killing Iran’s most powerful general — a step Abdul-Mahdi called a “political assassination” — marked a turning point in U.S. Mideast policy by elevating a conflict that had previously been more of a shadow war, and by putting in doubt the Pentagon’s ability to keep troops in Iraq.