ISIS claims suicide strike that killed at least 41 in Iraq

The Islamic State has claimed responsibility for an attack at an Iraqi soccer stadium on Friday that killed 41 people and wounded dozens more.

A suicide bomber struck in the small town of Iskandariyah about 30 miles outside of Baghdad as trophies were reportedly being handed out to soccer players by local officials.

Many of the victims were children, some as young as 10 years old, including the bomber who appeared to be a teenager, according to a photo distributed by ISIS.

A cell phone video appearing to show the event captured images of the awards ceremony that was attended by hundreds of people before the bomb was ignited and those nearby scrambled to reach safety.

The video above shows footage of an explosion that may be disturbing to some viewers.

One Iraqi officials told Agence France-Presse that at least 17 of the victims were boys between the ages of 10 and 16.

“The suicide bomber cut through the crowd to approach the center of the gathering and blew himself up as the mayor was presenting awards to the players,” Ali Nashmi, 18, who attended the ceremony, told AFP. The mayor and several of his security team also were reported among the dead.

The attack comes as the United States this week announced the targeted killing of a top leader of the Islamic State  and as Iraqi forces have regained territory against the militant organization, including parts of the western Iraqi province of Anbar . 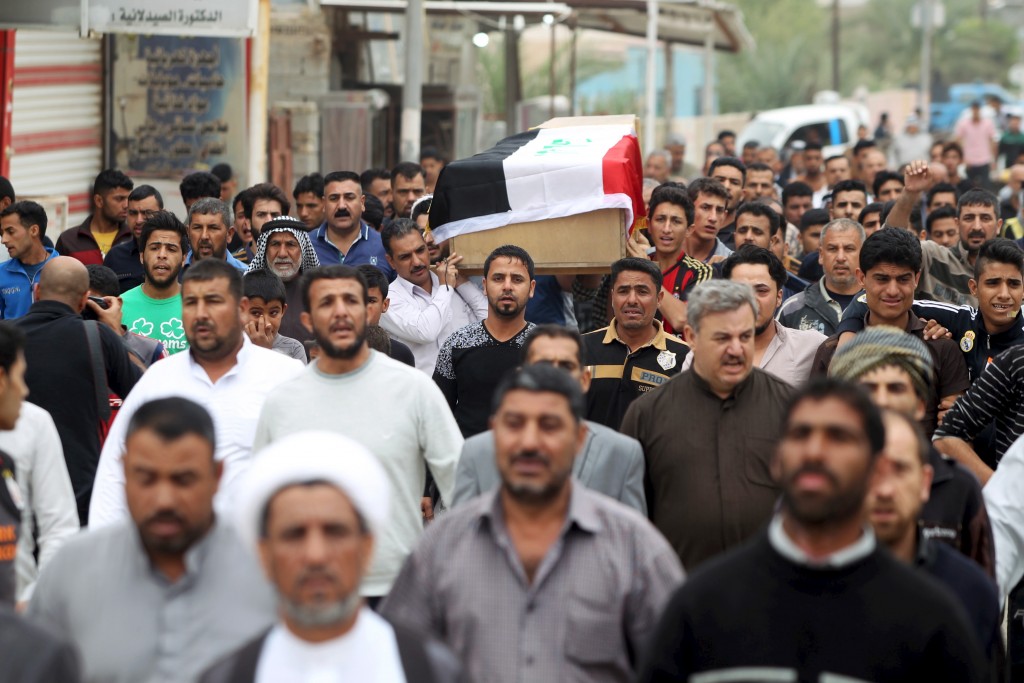 Mourners attend the funeral of a victim killed by a suicide bombing at a soccer field in Iskandariya, Iraq March 26, 2016. Alaa Al-Marjani/Reuters

The United Nations Secretary-General Ban Ki-moonon on Saturday extended their condolences to the victims of the attack.

“The terrorists are sparing no one,” he said. “They aim to strike at civilians everywhere and at any time, and to kill as many as possible. Yesterday it was spectators at a football game; a few weeks ago it was dozens of civilians waiting at a security checkpoint. They target funeral services and shopping malls. The international community stands with Iraqis in horror and outrage.”

Funerals were held for many of the victims on Saturday.

Left: A boy, who was wounded by a suicide bombing at a soccer field, lies in a hospital in Iskandariya, Iraq March 26, 2016. At least 41 people were killed in the attack, while many of the victims were children. Alaa Al-Marjani/Reuters