JERUSALEM — The Israeli military evacuated hundreds of Syrian rescue workers known as White Helmets from the volatile frontier area on the Golan Heights and transported them to Jordan, following a request by the United States and its European allies, officials said Sunday.

Foreign Minister Ayman Safadi said the total number of evacuees was 422, even though the initial request was to evacuate 800.

It was the first such Israeli intervention in Syria’s lengthy civil war, now in its eighth year.

Jordan confirmed the Syrian citizens entered its territory to be resettled in Western countries in weeks. Foreign Minister Ayman Safadi said the total number of evacuees was 422, even though the initial request was to evacuate 800. It was unclear what happened to the remainder.

Safadi later tweeted that Jordan approved the evacuations after a pledge from Britain, Germany and Canada that the Syrian evacuees would be resettled in three months.

The White Helmets and their families had been stranded along the frontier with the Israeli-occupied Golan Heights following the Syrian government offensive in southwestern Syria which began in June.

The group, which operates in opposition-held areas, is often targeted in Syrian government attacks on its members and facilities. The Syrian government considers the group a “terrorist” organization because it works in areas controlled by its opponents, where state institutions and services are non-existent. 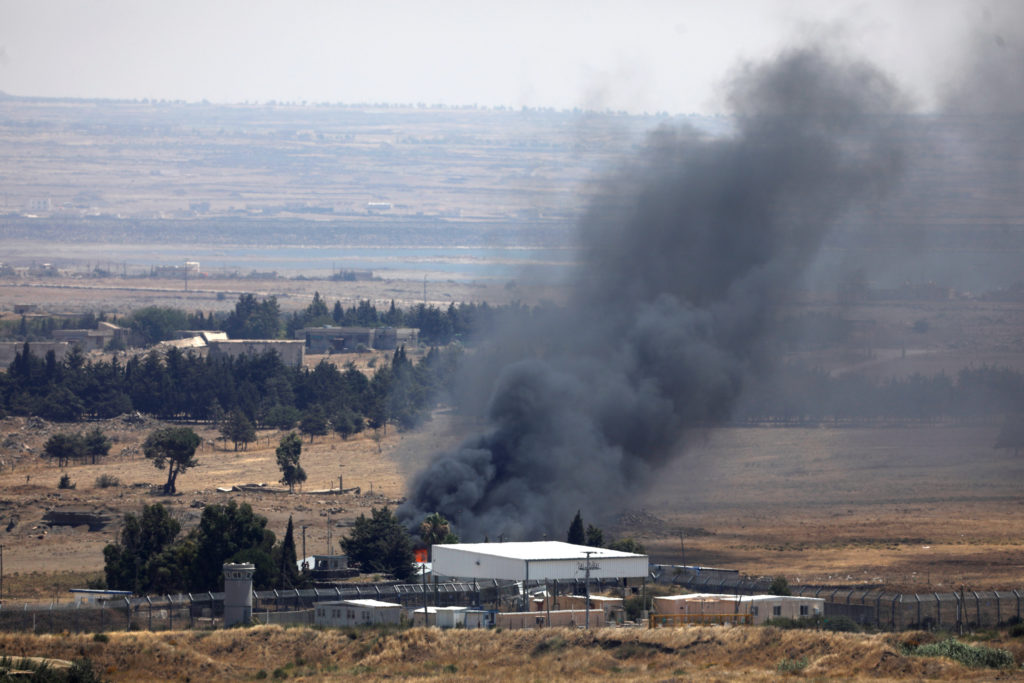 Black smoke is seen near the Israeli part of the Quneitra crossing at the Syrian side of the Israeli Syrian border as it is seen from the Israeli-occupied Golan Heights, Israel, on July 22, 2018. Photo by Ronen Zvulun/Reuters

The Israeli military said the overnight operation was an “exceptional humanitarian gesture” done at the request of the United States and its European allies due to “an immediate threat to the (Syrians’) lives.”

The military said its actions did not reflect a change to Israel’s non-intervention policy in Syria’s war, where all the warring parties are considered hostile.

READ NEXT: Out of Syria’s devastation, ‘The White Helmets’ offer moments of hope

The British International Development Secretary Penny Mordaunt and Foreign Secretary Jeremy Hunt said the Syrian volunteers and their family “have been able to leave Syria for safety” following a joint diplomatic effort by Britain and its international partners.

“The White Helmets have saved over 115,000 lives during the Syrian conflict, at great risk to their own,” the two officials said in a statement Sunday. “We judged that, in these particular circumstances, the volunteers required immediate protection. ”

The evacuees are being assisted by the U.N. refugee agency in Jordan, pending international resettlement, they said.

Jordanian Foreign Ministry’s spokesman Mohammed al-Kayed said the Syrians would remain in a closed area in Jordan for three months before moving on to Britain, Germany and Canada. 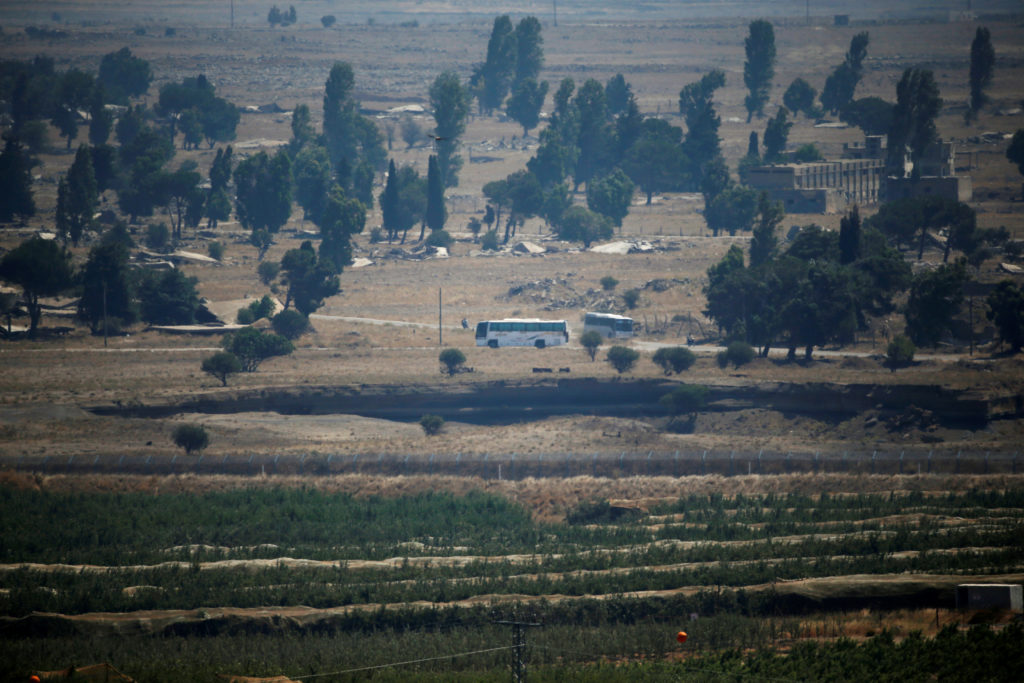 A bus drives near Quneitra at the Syrian side of the Israeli Syrian border as it is seen from the Israeli-occupied Golan Heights, Israel July 22, 2018. Photo by Ronen Zvulun/Reuters

Raed Saleh, head of the Syrian Civil Defense as the White Helmets are also known, said a number of volunteers and their families were evacuated from a dangerous, besieged area and had reached Jordan. He did not elaborate on the numbers of those evacuated.

The Syrian government and Russia view the White Helmets as “agents” of foreign powers and have regularly accused them of staging rescue missions or chemical attacks. Syrian state TV Al-Ikhbariya reported the Israeli evacuation of the White Helmets, calling it a “scandal” and saying “terrorist groups” now have “zero options.”

The Associated Press first reported on Friday that U.S. officials were finalizing plans to evacuate several hundred Syrian civil defense workers and their families from southwest Syria as Russian-backed government forces closed in on the Quneitra province, along the Golan Heights frontier.

The officials said the White Helmets, who have enjoyed backing from the United States and other Western nations for years, were likely to be targeted by Syrian forces as they retook control of the southwest. Evacuation plans were accelerated after last week’s NATO summit in Brussels.

Since the Syrian government offensive began in June, the area along the frontier in the Golan Heights has been the safest in the southwestern region, attracting hundreds of displaced because of its location along the disengagement line with Israel, demarcated in 1974 after a war. Israel has occupied the Golan Heights since 1967. Thousands of civilians had taken shelter near the frontier to escape the government offensive.

The Syrian government is unlikely to fire there or carry out airstrikes for fear of an Israeli response.

Meanwhile, Syrian forces kept up their offensive, pounding the southern tip of the southwestern region where an Islamic State-affiliated group still holds territory.

The Syrian Observatory for Human Rights said the bombing — 130 airstrikes since Saturday — displaced 20,000 civilians while an estimated 10,000 remain trapped in the area controlled by the militants, with their fate unknown.

Over the last month, Syrian government forces aided by Russian air power have swept through southwestern Syria to consolidate government control over this strategic corner of the country that straddles the border with Jordan and the frontier with Israeli-occupied Golan Heights.

With its new advances, government forces are, for the first time since the civil war began in 2011, retaking this territory from the rebels and restoring their positions along the disengagement line in the Golan Heights.

Since the offensive began, Jordan said it will not open its borders to the newly displaced Syrians. Jordan hosts at least 650,000 registered Syrian refugees, according to the U.N., but Amman says a similar number of undocumented Syrians are also in the kingdom.

During the latest Syrian government offensive, which began on June 19, around 300,000 Syrians have been displaced, heading toward the sealed Israeli and Jordanian borders in what the U.N. said was the largest single displacement since the Syrian civil war started in 2011.

Some Syrians have opted to be evacuated to northern Idlib province, where the opposition still holds territory. Thousands of armed men and their families were evacuated over the weekend. The Observatory said two buses carrying evacuees were held up by a pro-Syrian government militia, apparently after they went off road.

Panicked passengers, fearing for their lives, posted pictures of the militia surrounding their buses on social media.

Israel has been sending aid into Syria for several years and has provided medical treatment to thousands of Syrians who reached the Golan Heights frontier. In the past two years, the Israeli military says it has delivered more than 1,500 tons of food, 250 tons of clothing and nearly a million liters of fuel.

The Israeli military said it will continue to aid those in need but won’t allow a massive influx of refugees into the country.

Left: An explosion is pictured at Quneitra at the Syrian side of the Israeli Syrian border, as seen from the Israeli-occupied Golan Heights, Israel, on July 22, 2018. Photo by Ronen Zvulun/Reuters