What we know about the suspected gas attack in Douma, Syria

A suspected chemical attack in a rebel-held area of Syria last weekend left at least 40 people dead, according to aid groups. On Friday, the United States, France and Britain launched military strikes in Syria in response to the incident. Here’s a look at what we know.

The White Helmets, a volunteer relief organization that conducts searches and rescues and medical evacuations in Syria, said that 40 people died in a chemical attack in the southern city of Douma. The group blamed the Syrian regime. Symptoms of those seeking medical help included blueish skin, foaming at the mouth, burning sensation in the eyes and difficulty breathing.

The UK-based Syrian Observatory for Human Rights said the death toll was even higher totaling as many as 80 people, including 40 from suffocation. 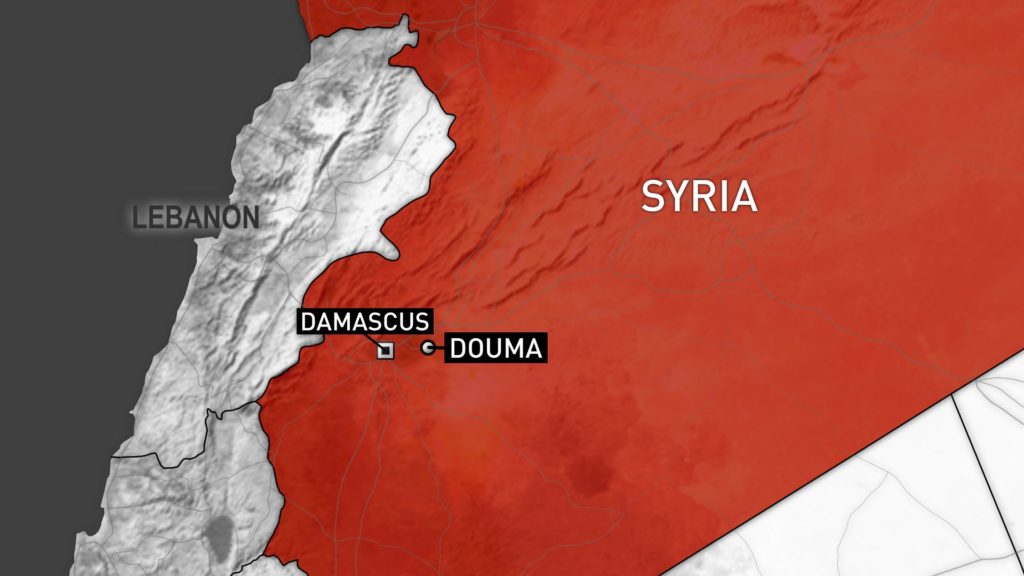 A statement from the Syrian government said “the army, which is advancing rapidly and with determination, does not need to use any kind of chemical agents.”

Russian Foreign Minister Sergei Lavrov said Monday that no evidence was found of a chemical attack. He also alleged a “provocation” had been prepared to blame the regime for an attack.

Following the reports of the chemical’s release, Russia and the Syrian military said Israel fired missiles at a major air base — known as T4 — in central Syria, killing 14 people including three Iranians. The Pentagon denied in a statement that the U.S. military had launched the missile strikes and would continue to “closely watch the situation.”

After the attack, President Donald Trump tweeted that “President Putin, Russia and Iran are responsible for backing Animal Assad,” referring to Syrian President Bashar al-Assad, and that there was a “big price to pay.”

On Friday night, he announced that American, French and British forces launched airstrikes that targeted Syria’ chemical weapons supplies. Defense Secretary James Mattis said the attack was “a one-time shot” but did not rule out more show of force against Assad in the future, according to the Associated Press.

A year ago, President Trump ordered an airstrike of an air base in Syria following another chemical attack in the rebel held northwestern town of Khan Sheikhoun, where at least 58 people died. At the time, Russia said the poison gas was released when Syrian warplanes bombed a facility where rebels were making chemical weapons.

French Foreign Minister Jean-Yves Le Drian on condemned the Syrian regime’s continued siege of Douma and the bombings, which are “in flagrant violation of international humanitarian law.”

British Prime Minister Teresa May called the attack “barbaric,” saying during a visit to Denmark that “If they are found to be responsible, the regime and its backers, including Russia, must be held to account.”

Organization for the Prohibition of Chemical Weapons (OPCW) Director-General Ahmet Uzumcu expressed “grave concern” over the latest use of toxic gas and launched an investigation. The OPCW, an independent international chemical weapons watchdog, arrived in Syria over the weekend to investigate the attack, but has yet to visit Douma, the AP notes.

Aug. 20, 2012: President Barack Obama says Syrian President Bashar al-Assad should not use biological or chemical weapons against his people, or he risks crossing a “red line.”

March 19, 2013: The Syrian government and opposition both say the other is responsible for a gas attack in the northern town of Khan al-Assal that kills 26 people. U.N. investigators later say sarin gas was used, though they don’t say which side.

Aug. 21, 2013: In the Damascus suburb of Ghouta, more than 200 people are reportedly killed by poison gas. A U.N. investigation confirms the use of sarin gas delivered by rockets.

Sept. 4, 2013: President Obama said at a joint press conference, “First of all, I didn’t set a red line; the world set a red line,” appearing to step back from his comments made the previous year.

Sept. 14, 2013: Then-U.S. Secretary of State John Kerry and Lavrov reach a deal that calls for the removal or destruction of Syria’s chemical weapons by mid-2014.

June 2014: The Organization for the Prohibition of Chemical Weapons says it removed the last of Syria’s chemical weapons.

August 2015: The U.N. Security Council directs the OPCW and U.N. investigators to look into reports of repeated use of chlorine gas by government forces against civilians in rebel-held areas. The investigators find that the Syrian government used helicopters to drop chlorine gas twice on civilian areas in Idlib province in 2014 and 2015.

Jan. 5, 2017: Kerry writes in an exit memo that the U.S. worked with Russia and the U.N. to destroy 1,000 tons of Syria’s stockpiles but acknowledges that “unfortunately, other undeclared chemical weapons continue to be used ruthlessly on the Syrian people.”

April 4, 2017: In the rebel-held town of Khan Sheikhoun, at least 58 people die from what appears to be a nerve agent, which causes foaming at the mouth, convulsions and suffocation.

April 6, 2017: The U.S. military fires cruise missiles into Syria, targeting an air base.

April 13, 2018: The United States, France and Britain launched military strikes in Syria in response to the suspected chemical attack.

Left: A child is treated in a hospital in Douma, eastern Ghouta in Syria, after what a Syria medical relief group claims was a suspected chemical attack on April 7. Photo by White Helmets/Handout via Reuters