JERUSALEM — Israeli Prime Minister Benjamin Netanyahu on Sunday announced overnight curfews on some 40 cities and towns hit hard by the coronavirus, but backed away from reported recommendations for full lockdowns after an uproar by politically powerful religious politicians.

The measures were announced late Sunday after hours of consultations with decision-makers. The government has been forced to take new action after failing to contain an outbreak that has claimed more than 1,000 lives and remains at record levels of new infections.

The curfews will go into effect Monday night at 7 p.m. and will last until 5 a.m. It was not known how long they will remain in place. People will not be allowed to venture more than 500 meters (yards) from their homes, and nonessential businesses will have to close.

The announcement came less than two weeks before the Jewish New Year. The outbreak has raised concerns that the country could be forced to declare a nationwide lockdown during the upcoming holiday period, a time of widespread travel and large family gatherings. 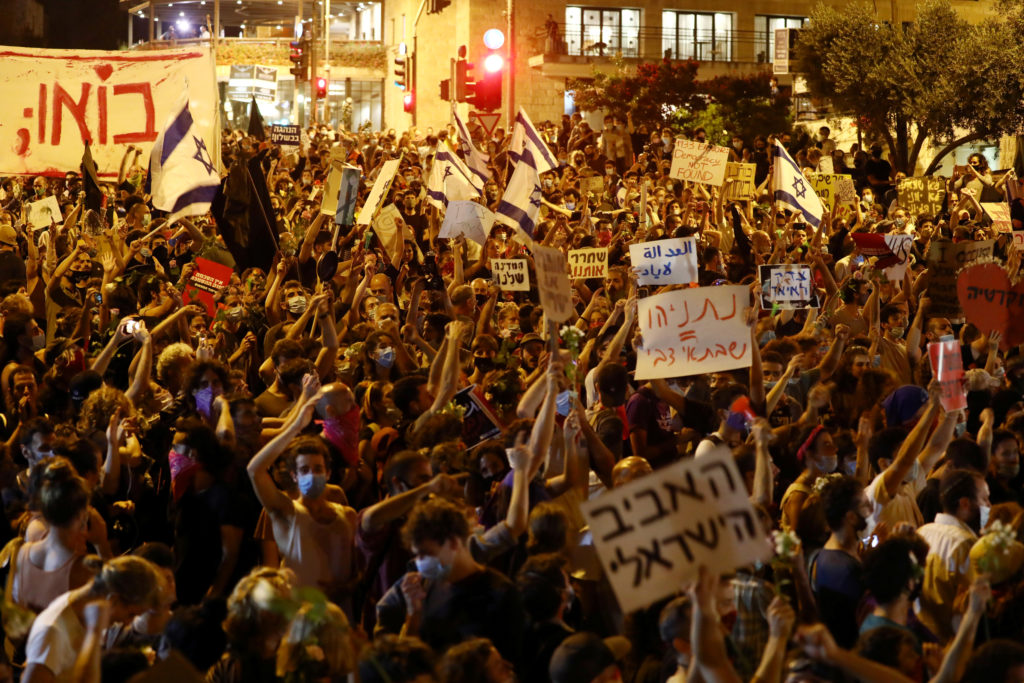 People protest against Prime Minister Benjamin Netanyahu and his government’s handling of the coronavirus disease (COVID-19) crisis, near Netanyahu’s residence in Jerusalem July 24, 2020. The placard at the foreground in Hebrew reads “The Israeli Spring”. Photo by Ammar Awad/ Reuters.

Gamzu has been pushing for full lockdowns on areas that have the worst outbreaks. These “red” cities have been heavily concentrated in Israel’s Arab and ultra-Orthodox Jewish communities.

But ultra-Orthodox leaders have strongly resisted calls for lockdowns and threatened not to obey new orders. Orthodox parties are key partners in Netanyahu’s governing coalition.

In an apparent compromise, Netanyahu said these red areas would have nighttime curfews, schools would be closed and there would be restrictions on public gatherings — but a full lockdown was avoided.

“I know these measures are not easy, but in the current circumstances, there is no escaping them,” he said. “We will continue to take responsible steps that are required to protect public health, lives and the economy.”

Israel had earned praise last spring for its early handling of the virus crisis, moving quickly to seal the country’s borders and appearing to bring an outbreak under control.

But Netanyahu has come under criticism for reopening the economy too quickly in May. Since then, new cases have spiked to record levels, the government has been blamed for mismanaging the resurgence and unemployment has soared to double-digit levels. Weekly protests against Netanyahu over his corruption trial have expanded to include demonstrations against his handling of the health crisis and the resulting economic pain.

Overall, Israel has recorded nearly 130,000 cases of the virus, with more than 26,000 still active. It recently has been reporting some 3,000 new cases each day.

Upon Gamzu’s recommendation, the military established a task force last month to bring the outbreak under control. Its main responsibility is taking the lead in contact tracing and breaking chains of infection.

Left: FILE PHOTO: Israeli Prime Minister Benjamin Netanyahu arrives for a speech at his Jerusalem office, regarding the new measures that will be taken to fight the coronavirus, March 14, 2020. Photo by Gali Tibbon/Reuters.