JERUSALEM — The Israeli military on Sunday said that Lebanese militants fired a barrage of anti-tank missiles at an Israeli army base, scoring a number of direct hits on Israeli targets. Israel responded with heavy artillery fire toward targets in southern Lebanon.

The sudden burst of violence raised the prospect of a wider round of fighting between Israel and the Lebanese militant group Hezbollah. The bitter enemies, which fought a monthlong war in 2006 that ended in a stalemate, have appeared to be on a collision course in recent weeks amid a series of covert and overt Israeli military strikes and Hezbollah vows of revenge.

Lebanese Prime Minister Saad Hariri held telephone calls with U.S. Secretary of State Mike Pompeo as well as an adviser to French President Emmanuel Macron urging Washington and Paris as well as the international community to intervene in the volatile situation.

Israel considers Iran to be its greatest enemy, and Iran-backed Hezbollah to be its most immediate military threat. Hezbollah has an experienced army that has been fighting alongside the forces of Syrian President Bashar Assad in Syria’s civil war, and it is believed to possess an arsenal of some 130,000 missiles and rockets.

Throughout the Syrian war, Israel has acknowledged carrying out scores of airstrikes in Syria aimed at preventing alleged Iranian arms transfers to Hezbollah. But in recent weeks, Israel is believed to have struck Iranian or Hezbollah targets in Iraq and Lebanon as well.

Hezbollah has vowed to avenge the deaths of a pair of operatives it says were killed in an Israeli strike in Syria last week. Hezbollah is also out to avenge an alleged Israeli drone strike in Beirut that Israeli media have said destroyed a sophisticated piece of equipment needed to manufacture precision-guided missiles.

In response, Israel has bolstered its forces along the northern border with Lebanon. Hezbollah has denied it is pursuing a domestic missile-production program.

“The Islamic Resistance carried out the secretary general’s promise to retaliate for the two aggressions,” Hezbollah’s Al-Manar TV presented said Sunday, referring to the Israeli airstrike in Syria and drone strike in Beirut. 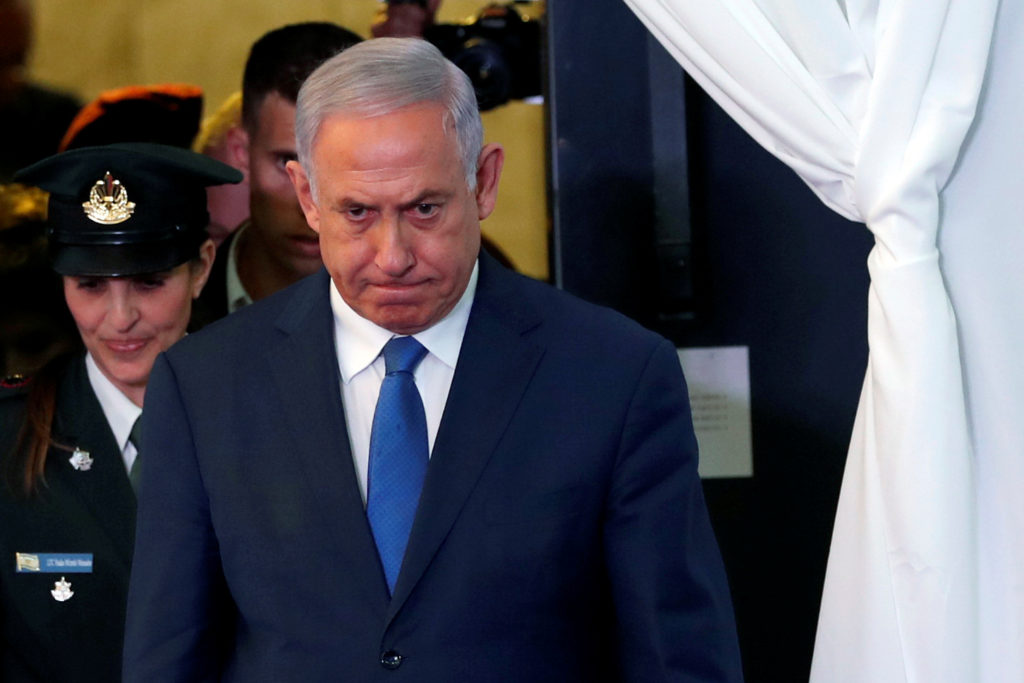 Israeli Prime Minister Benjamin Netanyahu looks on as he arrives to review an honor guard with his Ethiopian counterpart Abiy Ahmed during their meeting in Jerusalem on September 1, 2019. Photo by Ronen Zvulun/ Reuters

“A new empire has arisen, the goal of which is to defeat us. They dispatch proxies,” he said. “We are dealing with extremist Islam led by various elements, but in the end, the biggest threat to our existence comes from Iran.”

In Sunday’s fighting, the Israeli military statement reported a “number of hits” by anti-tank missiles fired at an army base and military vehicles near the Lebanese border in northern Israel. It said it was responding with fire toward “the sources of fire and targets in southern Lebanon.”

There was no word on casualties.

In Lebanon, the Israeli shelling was concentrated on areas close to the border near the villages of Maroun el-Ras and Yaroun, triggering some fires.

Hezbollah said the unit that carried out the attack on Israel was named after two operatives who were killed in the Israeli airstrike on Syria on Aug. 24. It said one of its units had destroyed an Israeli military vehicle and wounded the people inside.

Earlier Sunday, the Lebanese army had claimed an Israeli drone violated the country’s airspace and dropped flammable material on fields, triggering a fire that was extinguished shortly afterward by residents.

Despite Israel and Hezbollah’s deep hostility, they have largely refrained from direct fighting for the past 13 years.

The military said it had encouraged residents near the northern border with Lebanon to stay indoors and ordered public bomb shelters to open.

Left: Smoke rises from shells fired from Israel in Maroun Al-Ras village, near the border with Israel, in southern Lebanon, September 1, 2019. Photo by Aziz Taher/ Reuters