The unrest happened just two days after clashes with Palestinians at the same site. Violence in Jerusalem between Israeli security forces and Palestinian demonstrators a year ago escalated into an 11-day Gaza war.

The hilltop compound housing the mosque is the third-holiest site in Islam, while it is the holiest place for Jews, who refer to it as the Temple Mount. The competing claims to the site have sparked numerous rounds of violence.

This year the Muslim holy month of Ramadan, Christian holy week culminating in Easter Sunday and the week-long Jewish Passover are all occurring at the same time, with tens of thousands of visitors flocking to the city after coronavirus restrictions have been mostly lifted.

Israeli police accused Palestinians of “defiling and desecrating” a holy site, while Palestinian officials accused Israel of trying to divide the sensitive holy site. “What happened in Al-Aqsa Mosque is a dangerous escalation, the repercussions of which are to be borne by the Israeli government alone,” said Nabil Abu Rdeneh, spokesman for Palestinian President Mahmoud Abbas.

Police said they entered the compound to facilitate the routine visit of Jews to the holy site. They said Palestinians had stockpiled stones and set up barriers in anticipation of violence.

Omer Barlev, the Israeli minister in charge of the police, said it was important to ensure freedom of worship “but we will not compromise when violence and terror take place.”

The police cleared Palestinians out of the sprawling esplanade outside the mosque itself early Sunday, while dozens of Palestinians remained inside the building chanting “God is Greatest.” Video released by police showed small groups of youths throwing stones, as well as fireworks being fired from inside the mosque.

Palestinians reported brief clashes with Israeli police just outside the mosque compound, while police said Palestinians had thrown stones at buses outside the Old City. Paramedics said five people riding in buses received treatment for minor injuries in the attacks.

Police released a video showing a crowd of youths pelting a passing bus with stones just outside the Old City. Another video from the police, taken inside one of the buses, showed Jewish families sitting on the floor of the vehicle as it continued on its way. 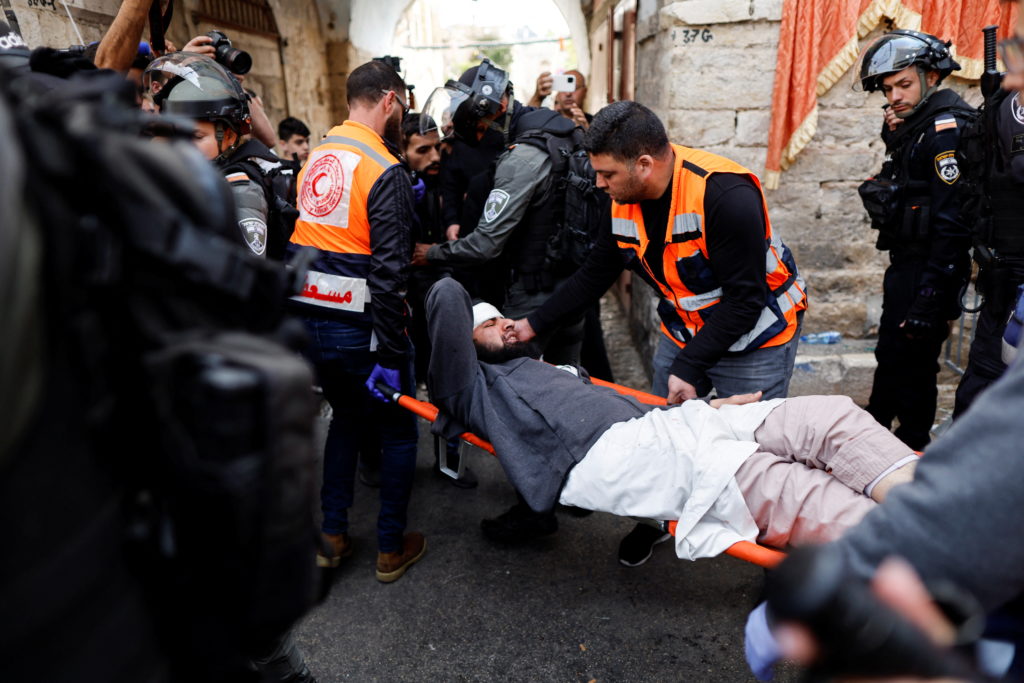 Rescue personnel evacuate an injured man outside the compound that houses Al-Aqsa Mosque, known to Muslims as Noble Sanctuary and to Jews as Temple Mount, in Jerusalem’s Old City April 17, 2022. Photo by Ammar Awad/Reuters.

“We are working to calm things down on the one hand and are taking vigorous action against violent individuals on the other,” he said.

The Palestinian Red Crescent medical service said 17 Palestinians were wounded, including five people who were hospitalized. Israeli police reported nine arrests. By midday, witnesses said police had moved out of the compound.

Jordan, which serves as custodian of the holy site, issued a statement condemning Israel’s actions, saying they undermine “all efforts made to maintain the comprehensive calm and prevent the escalation of violence that threatens security and peace.”

Under longtime understandings, Jews are allowed to visit the Temple Mount but are barred from praying there. For decades, Jews avoided worship there for religious reasons.

Israeli authorities say they are committed to maintaining the status quo, but in recent years large groups of nationalist and religious Jews have regularly visited the site with police escorts, something the Palestinians view as a provocation. The number of visitors often rises during religious holidays. Palestinian officials said nearly 550 Jewish visitors entered the compound, compared to just a few dozen on most days.

Such practices have fueled concerns among Palestinians that Israel is plotting to take over the Al-Aqsa Mosque compound or partition it. Israel strongly denies such claims, saying it is committed to protecting freedom of worship for all.

Clashes erupted at the site before dawn on Friday after police said Palestinians had hurled stones toward the Western Wall, an adjacent Jewish holy site. Police entered in force and clashed with dozens of Palestinians shortly after dawn prayers.

Israel captured east Jerusalem, which includes the Old City, along with the West Bank and Gaza in the 1967 war. The Palestinians want a future state in all three territories. Israel annexed east Jerusalem in a move not recognized internationally and is building and expanding settlements in the occupied West Bank. Hamas controls Gaza, which has been under an Israeli and Egyptian blockade since the Islamic militant group seized power there in 2007.

A radical Jewish group recently called on people to bring animals to the site in order to sacrifice them for Passover, offering cash rewards for those who succeeded or even tried. Israeli police work to prevent such activities, but the call was widely circulated by Palestinians on social media, along with calls for Muslims to prevent any sacrifices from taking place.